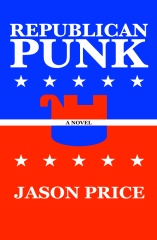 Get your copy today at Amazon.com

I received a copy of Jason Price’s Republican Punk a short while ago. With the holidays, it took a bit to get to it, but once I started reading it, I couldn’t put it down. Frankly, the book is a great escape from everything that is going on out there. Well written, with a great plot and characters — I heartily recommend the book.

Here is the overview of the book:

Jack Turner lives a content life as a devoted family man and small-business owner. That is, until the day he confronts a politician at a staged rally. When footage of the encounter goes viral, the self-described “everyday, hard-workin’ American” becomes an unlikely celebrity.

Traveling in a used Winnebago with his family and close friends, Jack leads a national movement to save America from the fat cats and bureaucrats-one city at a time. His overnight fame attracts the attention of wealthy Republican Party financiers; and his popular cross-country tour soon explodes into a full-fledged campaign for the Party’s nomination.

But Jack’s resolve is tested when rumors surface of an internal coup. As tensions rise, and his poll numbers fall, he realizes his greatest threat isn’t a single candidate but the Party itself-a powerful enemy who will stop at nothing to ensure his defeat.

Ah, life imitates art, but with a twist. Whereas Jack Turner is a good guy, John Boehner is not. And an internal coup of the Republican Party is coming, with the Tea Party leading the charge into the fray. If you look at the story from the Tea Party’s point of view in the House, the Republican party is indeed a powerful enemy. So, you can see why I am enamored with the storyline.

Jack Turner could be any one of us… he certainly could be Joe the Plumber. In fact, aside from being a great read, this book should be a clarion call for those who can, to step into the battle and fight now as never before. Either in the political arena, at protests or at a key board… we are all Jack Turner now. The Tea Party is viral and is the basis for a return to Constitutional foundations. This is a book for our times and cheaper than therapy. Seriously.

Buy Jason Price’s Republican Punk today. It will make an awesome Christmas gift or a holiday release valve. Think of it as survival enhancement.

One thought on “Republican Punk – A Book Review”