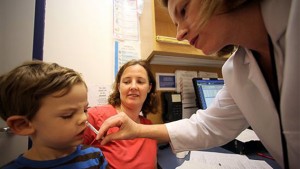 Looks like fascist Nanny Bloomberg intends to make good use of his final three weeks in office. For those of you hoping that Comrade de Blasio will reverse this or somehow be better, take your medication and get over it. Not. Gonna. Happen. Bloomberg wasn’t content with taking away salt, soft drinks or Styrofoam… He’s not content with $102 tolls to bring a delivery truck into New York or telling you that you can’t smoke… He’s not content with taxing and regulating the hell out of New Yorkers, or with claiming he knows better than the stupid riffraff that elected him… Oh no. Now he is mandating that our children get a yearly flu shot. If you love your family, get the hell out of New York. Under de Blasio this will seem like a walk in Gorky Park:

On Wednesday, with just three weeks to go until he leaves office, Mr. Bloomberg’s controversial Board of Health is set to vote on new rules that would force children as young as six months old to be immunized each year before December 31 if they attend licensed day care or pre-school programs.

“Young children have a high risk of developing severe complications from influenza. One-third of children under five in New York City do not receive an annual influenza vaccination, even though the vaccine safely and effectively protects them against influenza illness,” the Health Department said in a statement. “This mandate will help protect the health of young children, while reducing the spread of influenza in New York City.”

According to a Board of Health notice made public in September, influenza results in 20,000 hospitalizations and 30 to 150 deaths in children under 5 nation-wide each year.

Under the proposed rule, which had a public hearing in October, the vaccinations would be required “unless the vaccine may be detrimental to the child’s health, as certified by a physician licensed to practice medicine in this state, or the parent, parents, or guardian of a child hold genuine and sincere religious beliefs which are contrary to the practices herein required.”

One wonders why the jackbooted thuggery of enforcing flu shots in children? Surely there is nothing nefarious going on there, right? Did an outbreak of killer swine flu happen that I didn’t hear about? Is The Stand about to play out tomorrow? If so, Bloomberg should get the Walking Dude’s part down pat. And there’s more to this – he is pushing for a registry of certain individuals who have been admitted for mental evaluation or treatment:

With the clock running out on its final term, the Bloomberg administration is pushing two assertive new mandates through the city’s Board of Health.

The city Department of Health wants to require all children under age 5 in city-licensed day care programs receive annual flu vaccinations. And in a move with heightened relevance following the Washington Navy Yard massacre, the city is calling on hospitals to report personal details on patients admitted for psychosis to the Department of Health and Mental Hygiene.

Both items are on the agenda for the next Board of Health meeting, on October 22.

The proposed rules follow the administration’s so-far thwarted effort to impose a ban on supersize sodas and other sugary drinks, which judges have ruled overreached the board’s powers. The members of the board are appointed by the mayor.

Under the new proposals, hospitals in the city would have to promptly report the identities of patients between the ages of 18 and 30 admitted for psychotic incidents. The city health agency intends to follow up with the patients to ensure they receive further treatment. Currently, fewer than half actually get such care.

“Without follow-up treatment, more than one quarter of these individuals will be expected to relapse and to be rehospitalized within one year,” the Department of Health explains in its plan. “Early, high-quality treatment can reduce the risk of relapse and increase chances for long-term remission.”

The department promises that the personal information collected – to include the patient’s name, age, gender, address, telephone number, insurance type and diagnosis – would be destroyed within 30 days. The remaining data would be made available for epidemiological studies.

A Department of Health spokesperson was not available for comment.

The collection of personal data on people with high risk of paranoia raises a red flag for Mark Heyrman, who teaches mental health law at the University of Chicago Law School.

“The more we say we will be collecting data on people who have mental illnesses, the more likely it is that mentally ill people will think that the information might eventually be used against them in some way,” said Heyrman. “The question is whether there will be enough positive effects to outweigh the fact that, as our friend Edward Snowden has shown us, our government is not particularly good at protecting its own privacy efforts.”

Hmmm. Considering gun confiscations have already begun in New York, you can add these individuals to the list of the ones who have their arms taken away. Screw the Constitution – screw the Second Amendment. The Politburo has spoken.

Many parents object to flu shots. There are suspicions that they are connected to autism. Some have life-threatening allergic reactions to them. Some children die from them. According to a Board of Health notice made public in September, influenza results in 20,000 hospitalizations and 30 to 150 deaths in children under 5 nation-wide each year. But how many wind up in the hospital, ill or dead because of the shots?

Myself, I don’t take flu shots. For me, when I do, it causes me to get the flu or pneumonia. Some will say that is ridiculous. I don’t – it has happened to me every time. They can stuff their flu shots.

We were not mandated when we were kids to get all these shots. Now, if you don’t immunize your children for everything mandated, they kick them out of daycare or school altogether. The State is now basically telling you that your children belong to them. They may go home to you at night, but they are on loan and Big Brother is watching.

The flu is serious. It can kill you and does kill many people each year. There is no cure and no sure way to prevent it, except to stay healthy and when you get the flu to take care of yourself and go to a doctor if need be. Good luck with that under Obamacare. And here’s the dirty little secret the government isn’t telling you. Even if you get immunized, if a killer flu strain mutates into existence, chances are your shot will do nothing for it. So, why the big push?

Parents should be the final arbiter of whether their children get immunized for the flu or not. I expect Bloomberg to shove through more fascist crap before he exits stage left (and I do mean Left). Look for de Blasio to kick the Marxism into high gear and to radically increase such fascist moves as mandatory flu vaccines for children and lists for those who have received mental assistance. What do you expect from a Communist? Well done, New York. Bloomberg and de Blasio – fascists of a red feather, in lockstep together.