Before we get to Obama, who makes me (as most of you) terribly tired, I would like to address other topics.

I have been wanting for some time to write about the issue of Bedouin settlement in the Negev, which has sparked enormous controversy and been used as a weapon against Israel. (So what else is new?)

The core question here is whether Bedouin families will be permitted to remain on land that they have usurped illegally. Will they be allowed to continue to function as squatters, or must they be required to resettle in towns – complete with full services, please understand – provided for them by the Israeli government according to a plan advanced by Benny Begin, who was a (Likud) Minister in the government at the time the law was drafted.

What a field day people have had – painting Israel as villainous, heartless in her treatment of Bedouin citizens of Israel. All the buzz words, such as “apartheid” and “displacement” are invoked. The fact that the truth lies elsewhere is frequently ignored.

I will say forthrightly that Israel is not faultless here. Her greatest mistake has been to allow the Bedouin to get away with too much, too long. This has not fostered an attitude of respect for Israeli law in the Bedouin, but, rather, has given them the impression they can get away with what they wish. Thus the great indignation, that this turns out to not be so.

Recently there have been demonstrations over the land issue that have turned violent and required arrests. What is certain is that the government cannot bend now if there is to be respect for law and proper resolution of this situation. 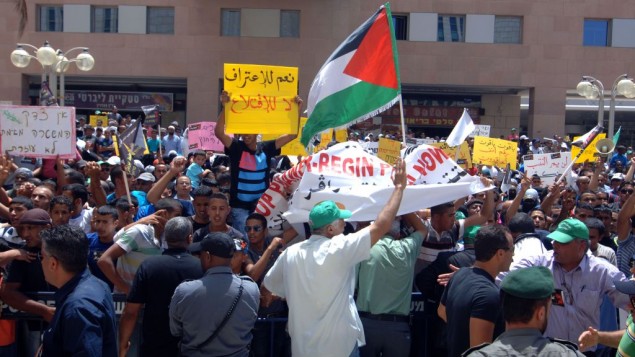 ~~~~~~~~~~
A thumbnail picture of the Bedouin population of the Negev is in order here:

The men often practice polygamy. Islam, after all, permits up to four wives, never mind that this is against Israeli law. How they do it is to serially marry and then divorce women, so that on the books they have only one wife at a time. With each of their wives they may produce several children, so that in total they might have 15 or 20 children. They have the highest birthrate in Israel, by far. As they are unable to support them all, they rely upon the Israeli welfare system to care for these kids. Remember, they are citizens, entitled to all benefits.

But here’s the kicker: while they enjoy the entitlements of citizenship, they are reluctant to assume the responsibilities. They prefer not to pay taxes. To that end, they try to avoid maintaining normal records that would make them traceable. Their homes – those illegally built ones – most often do not have official addresses. And they try to avoid bank accounts, which would provide a means of tracking their financial status.

However, as they need to collect their welfare funds for their kids, they go into the appropriate office in the regional capital city, Beersheva, apply in person and secure those funds in cash. No checks mailed to their homes or deposits made to their bank accounts. That the system allows this, without requiring normal documentation, is an example of what I mean when I say Israel has responsibility to this situation.

There was a time when Bedouin were associated with a reasonably high percentage of service in the IDF. They were known as highly skilled trackers and served their country. That situation is no more: the percentage serving in the army is way down, reflecting a much-diminished sense of loyalty to Israel.

One of the reasons why this is the case is directly linked to the polygamy issue. As there are not enough local Bedouin women to go around, the Bedouin men in the Negev seek woman from elsewhere: from places not known for their pro-Israel sentiment, such as Gaza. That is, these Israeli Bedouin children are being raised in some instances by women hostile to Israel.
What I hasten to point out is that this description does not apply to all the Bedouin. Certainly not. But it is, never-the-less, a distressful, unacceptable situation that has caused great civil disruption and requires major correction.

My description, above, I should note, does not encompass all aspects of the situation. I haven’t alluded, for example, to the Islamic Movement of Israel, Northern Branch, which has worked to radicalize the Bedouin population of the Negev, as part of its efforts to undermine Israel. They sometimes come into the Negev to assist in the building of those illegal homes.

Here I would like to recommend an article on the subject – “Bedouin settlement. Are we missing the point?” – by Ari Briggs.

Read this for a clearer picture of the outrage of Bedouin demands.

The funeral for Nelson Mandela has been held: Contrary to a misimpression, Knesset Speaker Yuli Edelstein and a contingent of MKs were present. The lauding of Mandela, who was unquestionably a hero for his nation, continues. And I think it important to provide a balance, as many here in Israel recognize quite forthrightly that he was no friend to Israel.

The best of the articles I’ve seen, with regard to balance, is this one by Michael Freund:

Now to Obama: I was going to analyze his statements, made at the Saban Forum on Saturday, about the Iran deal.

And so, I went back and looked at what he said. (http://www.imra.org.il/story.php3?id=62537 for full text of his remarks). It’s the same sort of pie-in-the sky, make-it-up-as-you-go-along vision as the one he offered for the “peace process,” and I found I hadn’t the patience to take it apart one misrepresentation at a time.

Thus, I simply want to share some news items that solidly refute the positive picture he painted.

And we can start with this:

“The Iranian economy is already showing signs of growth.”

“Senior officials in the administration of President Barack Obama have conceded over the past few days in conversations with colleagues in Israel that the value of the economic sanctions relief to Iran could be much higher than originally thought in Washington, security sources in Israel told Haaretz. (Emphasis added)

“In official statements by the United States immediately after the agreement limiting Iran’s nuclear program was signed in Geneva between Iran and the six powers at the end of November it was said that the economic relief Iran would receive in exchange for signing the agreement would be relatively low – $6 billion or $7 billion. Israeli assessment were much higher — about Israeli assessments were much higher – about $20 billion at least.

Cynic that I am, I will suggest the possibility that the Obama administration just might have had an inkling, even at the beginning, that the benefit to Iran of sanctions reductions was going to be considerably more than the $7 billion they were projecting.

At the same that they were making this excessively low projection, I remind my readers, they were telling Senators (this was Kerry) to “disbelieve everything that the Israelis…just told [us].”

But it’s not just Israel that is critical. Obama is facing considerable resistance in Congress (emphasis added):

“Congressional opposition to the recently announced nuclear accord with Iran reached a critical tipping point [last] week as lawmakers from both sides of the aisle publicly lambasted the deal while pushing for tighter economic sanctions on Tehran.

“As the details of an interim nuclear deal reached last month in Geneva become clear, Congressional opposition has grown, leaving the White House to sell a deal that even its allies have dubbed as worrisome.

“The White House held a classified briefing with members of Congress on Wednesday to push them against passing new sanctions in 2014, giving Iran at least another year of economic reprieve, according to Rep. Brad Sherman (D., Calif.).

“‘They want to convince us not to take any action in the first five or six months of 2014,’ Sherman said on the House floor during a Special Order on Iran organized [last] Wednesday evening by Rep. Peter Roskam (R., Ill.). ‘That means, in effect, we are not going to take action in 2014.’

‘Let’s take a look at this deal and we’ll see [that] what we get out of it is at least overstated by its proponents,’ Sherman said, explaining that the deal does not actually halt Iran’s contested uranium enrichment program, as the administration has claimed.

“…Like others, Rep. Rodney Davis (R., Ill.) said that only new sanctions will push Iran to make concessions ‘that would eliminate their enrichment capabilities.'”

Yesterday, Kerry argued that imposing new sanctions now would be an “act of bad faith”:
“This is a very delicate diplomatic moment. We’re at a crossroads. We’re at one of those, really, hinge points in history.”

Boy, he’s got that right. It’s just that he’s racing to take the wrong road at the crossroads.

I rather like the observation by The Israel Project that at one and the same time the Obama administration is arguing that it was stringent sanctions that brought Iran to the negotiating table, but that sustaining or increasing those sanctions will now drive Iran away from the table.

In recent days, Netanyahu has been less openly disputative with Obama, and sounding somewhat more conciliatory. It is my guess that he’s not only seeking to avoid a break with the US, he’s hoping for maximum leverage when it comes to forging the final demands to be placed before Iran at the end of this six-month “interim period.”

It is this playing-the-game approach, so much Netanyahu’s MO, that I see as responsible for his statements this past week with regard to Israel’s commitment to a “two state solution.”
While I do not like it, and it’s not what I would prefer to see him do, at the end of the day, it remains clear that our prime minister is setting out stipulations for a negotiated settlement that effectively preclude it within the current context.

Netanyahu addressed the Saban Forum on Sunday, via a video link. He stated then that the “minimal requirement for peace” is the readiness of the Palestinian Arabs to recognize Israel as the state of the Jewish people, who have rights to self-determination equal to their own.

On Monday, at a Likud faction meeting, Netanyahu said:

“Only once Israel’s terms are met will there be a peace deal. I would like to say something regarding the speculation about the coalition on the peace process. I want to clarify: Any deal, if one is reached, will be brought to a national referendum. What will decide whether a deal is reached is not one coalition’s dictate or another, but the essence of the agreement.

“We are not standing before a permanent accord. We have a set of specific terms that have yet to be met in the negotiations. … We are still not there, not even walking down that hall.” (Emphasis added)

I end today by sharing a link to a marvelous video about Israeli medical innovations. (With thanks to Judith N) 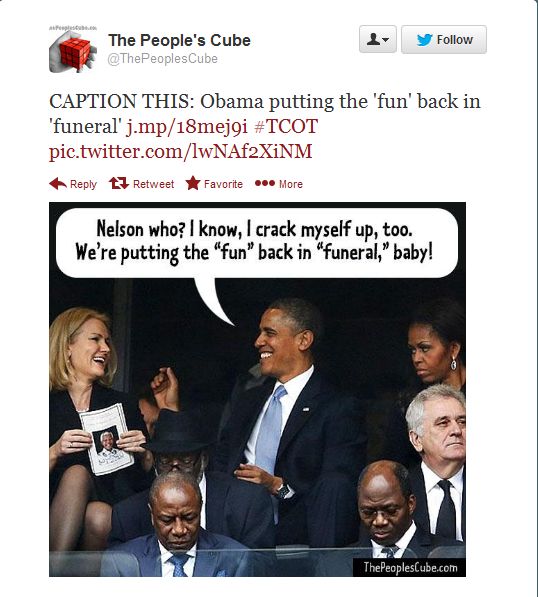 Read more at The People’s Cube…