This past week just about every movie critic and Hollywood reporter has commented about the 71st annual Golden Globes nominations noticeable snub of the 2012 film “Lee Daniels’ The Butler”. It was only after reading in today’s newspaper the latest hand-wringing from Jessica Herndon of the Associated Press, that it became clear. Ms. Herndon wrote: “Yet the annual picks by the Hollywood Foreign Press Association are typically questioned and this season is no exception. A rundown of snubs: “Lee Daniels’ The Butler.” Isn’t Oprah supposed to have a built-in value with the film community?” Maybe the mainstream news media is looking in the wrong place for the explanation. Or maybe they are afraid to admit the truth. Maybe there is a strong undercurrent of anger behind it.

A few months ago, when the ObamaCare fiasco hit the fans, there were several stories in the news about entire groups of Hollywood trades people either loosing their health insurance coverage or facing enormous premiums that used to be paid by the trade unions or the film companies. This was all faulted on the definition of their type of employment. Resentment runs deep and maybe the first person they recalled was Oprah Winfrey and the effused support that she gave to help elect Barack Hussein Obama. Her wealthy support of this Marxist/Socialist Democrat made her the figurehead of his Hollywood campaign. So perhaps, the snub of Oprah and her movie is a form of payback. And what may be more worrisome to Democrats everywhere is that same resentment being held by every American for what was done to them with this Democrat-created healthcare mess and what will happen next November on election day.

The worst is yet to come and they are now saying that on January 1st millions of people will find themselves with no health insurance coverage at all. 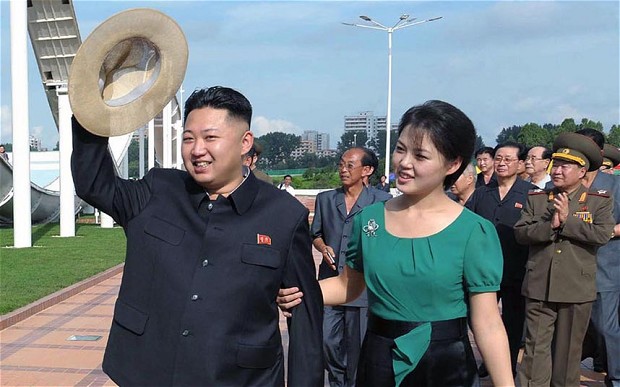 For those who pooh-pooh North Korea and their new tyrant, Kim Jong-Un… you might want to rethink that. And you might want to add into the equation his monstrous wife and aunt. It’s an episode of All in the Family from Hell.

Remember the old girlfriend that Jong-Un had executed by firing squad for being immoral? You know, the one that he accused of promiscuity and pornography, when in reality, she was said to be a Christian? Well, my money is on his wife, Ri Sol-Ju, whispering murderous desire in his ear. She takes jealousy to a whole new level.

The purge continues with numerous others, but more interestingly, Kim’s uncle, Jang Song-thaek. Pictures and photo-ops of Kim and his uncle were everywhere. That is until he had Uncle Jang tortured and shot. It’s the megalomaniac, Commie rage these days and seems to be a murderous trend. It is a time-honored tradition of dictators to erase those who are no longer useful, are an embarrassment or are in the way. Last Thursday, Uncle Jang was executed by firing squad in true North Korean style.

It now appears that the boy wonder’s aunt is as big or bigger a monster than he is. Kim Kyung-hui is rumored to be behind, or partially behind, the execution of Kim’s uncle:

“The final decision on Jang Song-thaek was made by Kim Jong-un and Jang’s wife, Kim Kyung-hui,” said Lee Yun-keol, the head of the North Korea Strategic Information Service Centre, based in Seoul. “Jang was chosen as a prey by his wife and nephew to maintain the Kim dynasty regime.”

Ah, power and the dynasty regime. Time to cleanse the familial palace… can’t have anyone even come close to rivaling NoKo’s dictator, unless of course it is your favored wife and possibly your evil aunt. Man, I would hate to go to their family reunions. Talk about deadly. 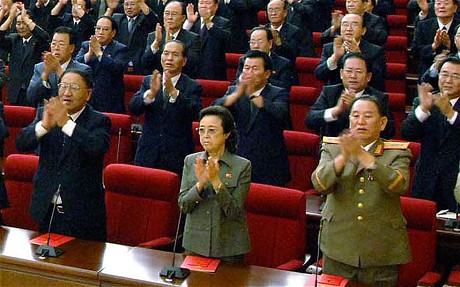 The 67-year-old Kim Kyung-hui is a powerful influence in the North Korean dynasty – daughter of the country’s first leader, sister of its second leader and aunt of its third leader. Power hungry, murderous, treacherous and manipulating, she would make the perfect villain for a novel or movie. Unfortunately, this is real life and she is rocking the NoKo cradle with deadly intent. She is old-school Communist and she has no pity or sympathy for those in her way. She also has a long, storied history in NoKo Communist politics.

She was a fairly quiet, behind-the-scenes character until 2009, when she started appearing with her brother frequently. In 2011, the aunt and her husband supported the ascension of the young Kim and she has been a controlling force behind him ever since.

Kim Kyung-hui’s husband, Jang, was renowned as a womanizer and a drinker. It is whispered that she became fed up with his shenanigans and got her nephew to off him. After his execution, state media accused Jang of leading a “dissolute, depraved life” and running up £6.4 million in gambling debts. He was also accused of distributing pornography. Hmmm. Sounds familiar. 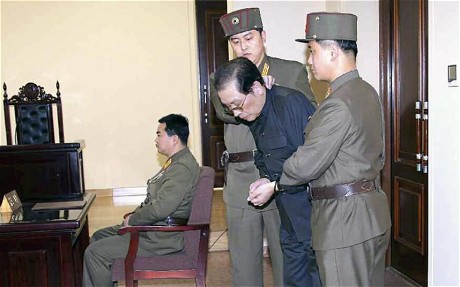 Jang Song Thaek, with his hands tied with a rope, is dragged into court by uniformed personnel. | Photo: Reuters

Enter Ri Sol-ju, who was introduced to Kim three years ago by his aunt. Rumored to be just as ruthless as his aunt, Kim’s wife could very well be the woman behind the man – the murderous tyrant, behind the monster. Don’t let her petite appearance fool you. Evil rulers come in all kinds of packages.

Remember the old girlfriend I mentioned before? She was part of a musical group – now all dead:

But in August, members of a musical troupe of which she was once a member, the Unhasu Orchestra, were wiretapped and heard saying: “In the past, Ri Sol-ju used to play around in the same manner as we did.”

The regime – and by extension, Miss Ri – was not amused.

“This is an unpardonable, hideous provocation hurting the dignity of the supreme leadership,” said the North Korean state news agency. “Those who commit such a hideous crime will have to pay a very high price.”

Miss Ri had to have her reputation intact – and so the nine members of the orchestra were arrested, and executed by machinegun three days later, with their families forced to watch.

It is said that Kim was having an affair with the old girlfriend. So many rumors, so much death. Many believe that Kim’s wife had them executed out of jealousy and for disrespecting her. 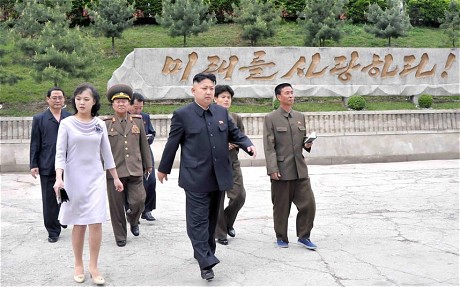 Kim is a monster in his own right. He does not hesitate to eliminate those in his way either. Take a look at Kim Chol, his Deputy Defence Minister. He was obliterated by a mortar round for not showing deferential reverence during the mourning period after Kim Jong-il’s death. Kim Jong-un ordered that “no trace of him [be left] behind, down to his hair.” Kim Chol was forced to stand atop a marked target and then was ‘eliminated’ with prejudice. 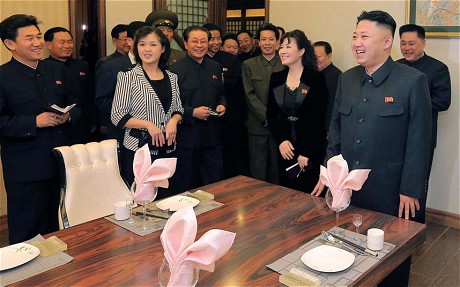 Many laugh at the thought of North Korea launching EMPs at us, or just regular old nukes. Even though they have been blatantly testing EMPs to use against us for some time now, with the assistance of Russia, China and Iran. And we do nothing.

North Korea is not a place you ever want to visit, not even briefly. Kim is adding onto his infamous prison camps that now house approximately 200,000 people in conditions that rival the Nazi death camps. South Korea now says that public executions have more than doubled under the paranoid and delusional rule of their newest young dictator. If daddy was nuts, this kid is literally insane. 17 were executed last year… more than 40 this year. Gee, can’t wait for the new season next year. If he’ll do this to his own people, imagine what he would do to say… America.

Uncle Jang got in the way. He has thoroughly been cleansed from history. There are now no official photos or videos of him. He has been denounced as “despicable human scum.” In a mock trial, he was convicted of an attempted coup (that probably never happened) and a wide range of “thrice-cursed acts of treachery.” Last seen, Jang was showing obvious signs of torture and was stooped and stumbling. Humiliated before execution. Kim does Communism proud.

As the US and the world collectively do nothing, everyone wonders who will be purged next. Carl Bildt, Sweden’s Foreign Minister, dubbed Kim’s regime “the empire of horror.” He is right and the US could be next on Kim’s to do list.

Here is an internet graphic I highly recommend, not to be used in any vindictive way, but to make it personal with fellow citizens. Let’s take it as a big cue.

People say “elections have consequences” and the calamity we are just beginning to see brought to us, through Obamacare, the police and surveillance state, generational debt slavery and citizenship debauchery, and through government’s promoting and subsidizing mass immorality — it makes that all too clear.

But when we talk, we talk to people. Let’s boil that down further. When you talk, you talk to a person. Our message does not nebulously issue to a generality. Don’t assume the lie of collectivism. Adopting the reality of individual responsibility, let’s pass it along and convey truth directly, to each person to whom we communicate.

Instead of “elections have consequences”:

Your vote had consequences.

Are you sorry for voting for lying despots, who intentionally bring us plagues like the false “welfare” of destructive collectivism, extreme government spending with taxes that become extortion, government dependency that saps personal initiative, rampant racist and sexist murder through abortion, and slavery to the paternalism of the government plantation?*

Or, do you think popular sovereignty is choosing between tyrants that rob us of the freedom required to lift ourselves up?

I want to make sure we don’t vote for tyrants that are here to bilk us through the unchecked powers of huge, transnational corporations, either. (Obama and his fellow “public-private partnership” stooges of the cartel collective do it to us on both sides.) Are you going to make sure you don’t get duped like that and vote for another one of these destroyers again?

What was done decades ago, to patriots such as Senator Joseph McCarthy (whom it took the release of KGB papers to vindicate) by propagandists like Frankfurt School Marxist, Edward R. Murrow, and then later, to Judge Robert Bork, by the likes of the deathly irresponsible Senator Ted Kennedy — that was “the politics of personal destruction.” In the Twenty-first Century, despots bring us each the personal politics of national destruction.

This is all very personal. Perpetrators on every level deserve the respect of our treating it personally with them. Sin is personal and it should be confronted in the here and now, and dealt with, so it doesn’t continue to hurt oneself and others — so it isn’t carried to judgment, the earthly kind or later. And if such sinful foolishness as throwing away personal sovereignty and freedom is repented from personally, by one, then our whole society begins to have one more blessing of true hope.

And turning to our actual reason for government is what I and others are attempting to bring about, through the Sovereignty Campaign.