Here is an internet graphic I highly recommend, not to be used in any vindictive way, but to make it personal with fellow citizens. Let’s take it as a big cue.

People say “elections have consequences” and the calamity we are just beginning to see brought to us, through Obamacare, the police and surveillance state, generational debt slavery and citizenship debauchery, and through government’s promoting and subsidizing mass immorality — it makes that all too clear.

But when we talk, we talk to people. Let’s boil that down further. When you talk, you talk to a person. Our message does not nebulously issue to a generality. Don’t assume the lie of collectivism. Adopting the reality of individual responsibility, let’s pass it along and convey truth directly, to each person to whom we communicate. 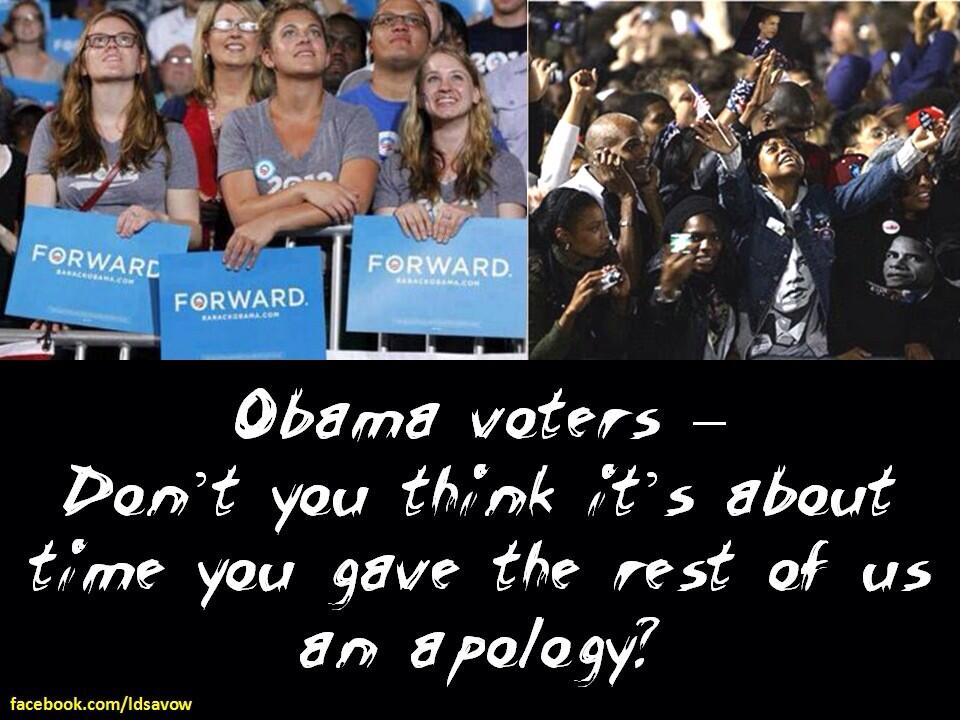 Instead of “elections have consequences”:

Your vote had consequences.

Are you sorry for voting for lying despots, who intentionally bring us plagues like the false “welfare” of destructive collectivism, extreme government spending with taxes that become extortion, government dependency that saps personal initiative, rampant racist and sexist murder through abortion, and slavery to the paternalism of the government plantation?*

Or, do you think popular sovereignty is choosing between tyrants that rob us of the freedom required to lift ourselves up?

I want to make sure we don’t vote for tyrants that are here to bilk us through the unchecked powers of huge, transnational corporations, either. (Obama and his fellow “public-private partnership” stooges of the cartel collective do it to us on both sides.) Are you going to make sure you don’t get duped like that and vote for another one of these destroyers again?

What was done decades ago, to patriots such as Senator Joseph McCarthy (whom it took the release of KGB papers to vindicate) by propagandists like Frankfurt School Marxist, Edward R. Murrow, and then later, to Judge Robert Bork, by the likes of the deathly irresponsible Senator Ted Kennedy — that was “the politics of personal destruction.” In the Twenty-first Century, despots bring us each the personal politics of national destruction.

This is all very personal. Perpetrators on every level deserve the respect of our treating it personally with them. Sin is personal and it should be confronted in the here and now, and dealt with, so it doesn’t continue to hurt oneself and others — so it isn’t carried to judgment, the earthly kind or later. And if such sinful foolishness as throwing away personal sovereignty and freedom is repented from personally, by one, then our whole society begins to have one more blessing of true hope.

And turning to our actual reason for government is what I and others are attempting to bring about, through the Sovereignty Campaign.

One thought on “A Graphic for Our Time: Time to Apologize, Obama Voter?”