Remember the faux Obama outrage when the Lois Lerner, IRS targeting scandal broke? He stood at his privileged podium, said he knew nothing about it, said it was “outrageous,” and “if in fact IRS personnel engaged in the kind of practices that have been reported on and were intentionally targeting conservative groups, then that’s outrageous and there’s no place for it…I have no patience for it and will not tolerate it,” said The Won. As we’ve seen in the past, he has now doubled down and new “clarifying rules” are actually new restrictions on conservatives while giving unions and other Liberal organizations even sweeter breaks. 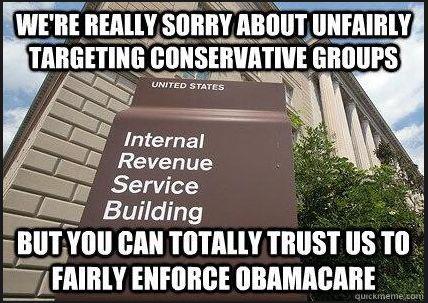 In the media blackout of Thanksgiving week, the Treasury Department dumped a new proposal to govern the political activity of 501(c)(4) groups. The administration claims this rule is needed to clarify confusing tax laws. Hardly. The rule is the IRS’s new targeting program—only this time systematic, more effective, and with the force of law.

That this rule was meant to crack down on the White House’s political opponents was never in doubt. What is new is the growing concern by House Ways and Means Committee investigators that the regulation was reverse-engineered—designed to isolate and shut down the same tea party groups victimized in the first targeting round. Treasury appears to have combed through those tea party applications, compiled all the groups’ main activities, and then restricted those activities in the new rule…

Here’s how it works. To get or keep tax-exempt status, 501(c)(4) organizations must devote a majority of their work to their “primary” social-welfare purpose. Most tea party groups were set up with a primary purpose of educating Americans on pressing problems—the size of government, the erosion of the Constitution—and did so mainly via nonpartisan voter guides, speakers forums, pamphlets or voter-registration drives.

What the proposed Treasury/IRS regulation would do is to re-categorize all these efforts as “political activity”—thereby making it all but impossible for tea party groups to qualify for 501(c)(4) status. Say an outfit’s primary purpose is educating voters on our unsustainable debt, which it does mainly with a guide explaining the problem and politicians’ voting records. Under the new rule, that guide is now “political activity” (rather than “social welfare”), which likely loses the group tax-exempt status. Source: Kim Strassel, WSJ

Please read Strassel’s article linked above to understand how the great advantage has been given to unions and other Liberal, Progressive, Obama proponents which are doing the same thing TEA parties do.

We are reaching a point of no return, or perhaps have already reached it. Obama was “outraged” enough to call-out another pack of dogs against his opponents. Alinsky would be proud. I’m betting Bill Clinton’s jaw is on the floor a good part of every day as he watches Obama operate in unthinkable ways. He can’t wait to get Hillary in the Oval Office because Bill and Hill have been schooled. They know the possibilities are limitless. He surely sees another presidency for himself in the future. With the IRS on the side of Liberalism, Progressives are unstoppable.