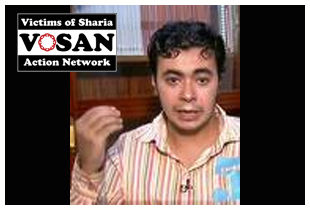 Bishoy Armyia – In Prison In Egypt

Apostasy laws are those under which a person is punished because he or she chose to change their religion.

I recently launched an initiative at the International Civil Liberties (ICLA) Alliance called the Victims of Sharia Action Network (VOSAN). The idea behind the project is to highlight human rights abuses around the world that are caused by certain aspects of sharia, the Islamic religious law.

It is important that Muslims and non-Muslims have equal protection under the Universal Declaration of Human Rights even if they happen to reside in a Muslim majority country. Human rights should apply equally to all irrespective of colour or creed. A person’s religion should not act as a barrier to the enjoyment of such basic rights.

However, in 1990 the Organisation of Islamic Cooperation (OIC) created a rival to the United Nations Universal Declaration – The Cairo Declaration on Human Rights in Islam. This makes human rights subject to the Islamic sharia and in so doing deprives people in Muslim countries of their most basic human rights.

Yesterday ICLA highlighted the case of Bishoy Armyia, a person who has suffered persecution in Egypt due to changing his religion from Islam to Christianity. The Egyptian state also seems to have got involved in the persecution. This might be a legacy case carried over from the time when the religious extremists of the Muslim Brotherhood ruled Egypt but this man still languishes in an Egyptian jail.

YOU can help this poor man have a greater chance to be reunited with his family this Christmas time if you act now. Please sign the petition that has been publicised by the Voice of the Copts website.

IMPORTANT: When you have signed don’t forget to check your email and verify your signature to ensure that it is included.

If you want to do more than this quick and simple act of signing a petition see the article on the International Civil Liberties Alliance Website. I wrote to the Egyptian Ambassador to the United Kingdom to highlight this case.