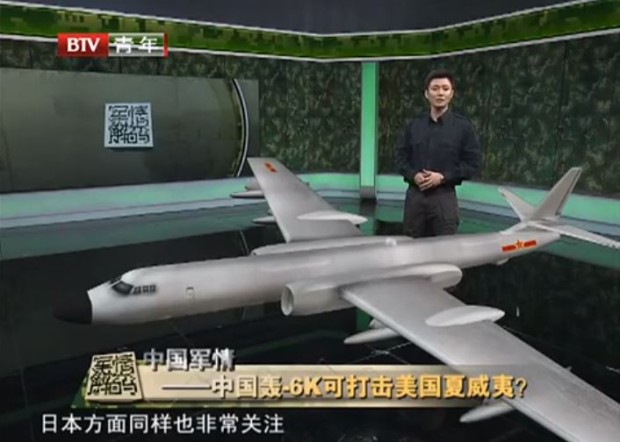 China is breathing nuclear fire and threatening Japan and US military bases with nuclear weapons. This just came out on the pro-communist news source: Want China Times. Who’s afraid of the big, bad dragon? Everyone should be, because the Chinese will eventually act on their threats when they deem the time right and probably, when we aren’t looking:

The People’s Liberation Army’s H-6K strategic bomber can attack the Japanese mainland with CJ-10 cruise missiles without even leaving Chinese airspace, reports the Kanwa Defense Review run by Andrei Chang also known as Pinkov, a military analyst based in Canada.

China had no real nuclear projection capability until H-6K entered service with the PLA Air Force, Kanwa’s report said. H-6K bombers have already been deployed with the 8th and 10th air divisions of the PLA Air Force. However, strategic bombers alone can not help China penetrate enemy defenses using surface-to-air missiles. For this reason, the long-range cruise missile has become a crucial part of China’s nuclear arsenal.

With a range of between 1,500 and 2,000 kilometers, the CJ-10 meets the requirements of the PLA Air Force to possess the capability to launch strategic missile attacks against US military facilities and those of its allies in the Western Pacific. All major cities in India are also within range if the H-6K launches the missile from Tibet.

In a potential war against Southeast Asian neighbors over territories in the South China Sea, the CJ-10 could be launched directly against Vietnam, Malaysia and the Philippines from the airspace of China’s southern island province of Hainan. Although the bomber and cruise missile lack the range to attack Russia’s largest cities, they pose a major threat to Russian cities in the Far East. An H-6K taking off from the air base of the PLA’s 10th air division in Anqing, Anhui province, would be able to strike at all US military bases in South Korea.

If the bomber were commanded to attack Japan’s main island of Honshu, the best choice from which to launch the CJ-10 missile would be the airspace of the Shandong peninsula at a distance of 1,700 kilometers, the article said, while Heilongjiang province in northeastern China is only 1,100 kilometers from the northern Japanese island of Hokkaido.

Although the Chinese have a penchant for bragging concerning their military prowess, their H-6K strategic bomber can attack US military bases in South Korea, as well as the Japanese mainland using long range nuclear cruise missiles. I have long contended that the Chinese military is now stronger than ours and they certainly have more disposable numbers of soldiers that they are more than willing to sacrifice in order to win in the South China Sea:

China is currently embroiled in a territorial dispute with Japan over the Senkaku Islands, tensions that were heightened earlier today when Japanese Prime Minister Shinzo Abe visited a shrine seen by critics as a symbol of Tokyo’s wartime aggression.

The aggressive stance by the Chinese military has been ratcheting up for some time now. As reported on this site just recently, the PLA crowed over China’s first aircraft carrier combat task force. And who could forget in November, the nuclear attack impact map displaying American cities that were being suggested as targets for the PLA’s strategic submarine force and nuclear weapons. China has also just landed an unmanned ship on the moon and has at length outlined their satellite killing defenses. A nuclear attack could also come from China in space against America and we would not be able to stop it. A depiction promoting China’s Jade Rabbit Moon rover also included a background photograph of a mushroom cloud over Europe. Many have looked at this display and have put two and two together equaling China’s militarization of space.

While Obama bows to the Chinese; they build cities here in the US that are wholly Chinese (New York) and they buy up our real estate and businesses, we just sit idly by and let a stealth attack continue. They own us financially and there are those in power in this country who are just fine with that. They feel that in the end they will be taken care of no matter what. They might want to study history a little more closely before they have outlived their usefulness.

The Chinese dragon is flexing its military muscle. They are probing the US military’s response to violations of international waters and air space. Pretty soon they will be done war gaming and will come for what they feel is rightfully theirs and then they will move on the global chess board to take the American King. We better counter before we are in an absolute checkmate.

I’ll close with an interesting quote from my friend Jay Elliott:

Almost 40 years ago a friend introduced me to the game of Go. It is the oldest board game on earth and is a mental martial art in Japan and China, complete with kyu and dan ratings. There are hundreds of professional players in the East. When Mao captured China from Chiang Kai-shek, he was asked by western reporters what he credited for his victory and he replied, “Chiang Kai-shek plays chess, and I play Go.” Fabulous game, really.

‘Go’ is the encircling game. Apropos for what China is doing to the US currently.

4 thoughts on “The Chinese Dragon Flexes Its Military Muscle”