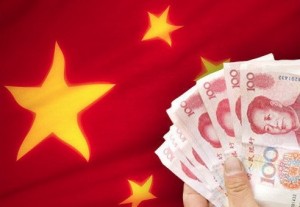 Well, it looks like the US and China have found common ground in the financial markets at last. They both are lurching towards a mega default of one form or another. Mark your calendars… China’s potential mega default is January 31st.

Gordon Chang at Forbes wrote a piece that caught my eye this morning: Mega Default In China Scheduled For January 31. What he wrote conveys a parallel path between the US and China of printing money and the threat of looming defaults and skyrocketing interest rates. Both countries are propping up economies that are not being allowed to correct naturally, all but ensuring a catastrophic correction sooner, rather than later.

On Friday, Chinese state media reported that China Credit Trust Co. warned investors that they may not be repaid when one of its wealth management products matures on January 31, the first day of the Year of the Horse.

The Industrial and Commercial Bank of China sold the China Credit Trust product to its customers in inland Shanxi province. This bank, the world’s largest by assets, on Thursday suggested it will not compensate investors, stating in a phone interview with Reuters that “a situation completely does not exist in which ICBC will assume the main responsibility.”

There should be no mystery why this investment, known as “2010 China Credit-Credit Equals Gold #1 Collective Trust Product,” is on the verge of default. China Credit Trust loaned the proceeds from sales of the 3.03 billion-yuan ($496.2 million) product to unlisted Shanxi Zhenfu Energy Group, a coal miner. The coal company probably is paying something like 12% for the money because Credit Equals Gold promised a 10% annual return to investors—more than three times current bank deposit rates—and China Credit Trust undoubtedly took a hefty cut of the interest.

Zhenfu was undoubtedly desperate for money. One of its vice chairmen was arrested in May 2012 for taking deposits without a banking license, undoubtedly trying to raise funds through unconventional channels. In any event, the company was permitted to borrow long after it should have been stopped—reports indicate that it had accumulated 5.9 billion yuan in obligations. Zhenfu, according to one Chinese newspaper account, has already been declared bankrupt with assets of less than 500 million yuan.

This loan comes due at the end of the month and they don’t have sufficient funds to pay the investors. The investors may not even be paid after a delay – their investment may simply disappear. If this occurs, it will set precedent in the financial markets and the world is watching. This would be the very first default of this magnitude to occur and it will rock the markets to their core.

Some are saying that the communists and the Bank of China want this default to teach investors a lesson about risk. In the end, look for the Chinese authorities, much like the US government, to ride to the rescue with newly printed money. The Chinese technocrats will deign to provide a desired outcome.

But, just like the US, the Chinese may be their own worst enemy in the end. They will continue to prop up a bankrupt system and prevent corrections, until the system just fails. And it will fail spectacularly:

Why will China’s next correction be historic in its severity? Because Chinese leaders will prevent adjustments until they no longer have the ability to do so. When they no longer have that ability, their system will simply fail. Then, there will be nothing they can do to prevent the freefall.

We are almost at that critical point, as events last June and December demonstrate. The PBOC did not try to tighten credit as analysts said in June and December; it simply did not add liquidity. The failure to add liquidity caused interbank rates to soar and banks to default on their interbank obligations. In the face of the resulting crises, the central bank backed down both times, injecting more money into state banks and the economy. So Chinese leaders showed us twice last year that they now have no ability—or no will—to deal with the most important issue they face, the out-of-control creation of debt.

There are rumors that local authorities in Shanxi will either find cash so that Liansheng can pay back its loans or force institutions to roll over the WMP marketed by Jilin Trust. Similarly, there are suggestions that ICBC, despite its we’re-not-responsible statement, will produce dough for the Credit Equals Gold investors. Others say China Credit Trust, China’s third-largest such group as measured by assets, will repay investors in part. Repayment will avoid an historic default and postpone a reckoning. In all probability, authorities will be able to get past Zhenfu if they try to do so.

Even if Beijing makes sure there is no default on January 31, we should not feel relief. Just as Zhenfu followed Liansheng, there will be another WMP borrower on the edge of disaster after Zhenfu. And there are many Lianshengs and Zhenfus out there. There may have been 11 trillion yuan in WMPs at the end of last year.

The amount of debt for the largest countries on the face of the earth is mind blowing and staggering. This will not end well and it is the common man who will suffer most. The communists and our own government consider the masses to be nothing more than a slave class. They consider a purge or die-off from time to time a good and necessary thing. So, as all of this comes crashing down, the elite in all countries will hide away with their buried treasure, their food and supplies and wait it out. The communists will continue to build their armies and go to war.

Remember the old saying that during a downturn is the time to buy? It is when the wealthy get wealthier, while the rest starve. They make a killing simply because they have money to still buy items. The same can be said of geopolitics. When the schumer really hits the fan, those with the strongest military and money left over will waltz in and conquer. China has the numbers in population and they are pouring all of their money into their military currently. Do the math. The Russians and Chinese are also backing each other and covering each others dirty financial secrets.

So, while the propaganda and lies fly and our leaders all tell us that everything is hunky dory, you might want to actually take a hard look at the economies around the globe. Every one of them is in serious, serious trouble and when the defaults hit like falling dominoes, chaos, riots and hunger will rule the day. The US and China share eerily similar mega default risks… the difference being the Chinese don’t care and are ruthless. They will use everything they’ve got to come out on top when the bottom falls out.

Our best chance in America is to clean out the Republican Party and put true TEA Party conservatives in power. We must get rid of Obamacare and stop Amnesty. 2014 is for all the marbles – we have to rid ourselves of the Marxists, take our financial medicine and return to Constitutional principles. The likes of Ted Cruz and Allen West are the answer to what ails America.