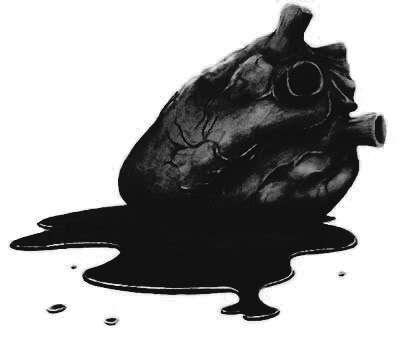 Dr. Oz showed this on his program recently. It’s what the heart of a Democrat looks like after years of lies, corruption and treachery. Don’t let it happen to you.

If you ever thought there was any reality behind the stale script of Democrats being the ‘party of the disadvantaged’ and, as a topping to the sundae – the party that disdains greed and materialism, I hate to be the one to break it to you. It’s pure fiction and pretty much always has been. I’ve written on this subject before, and as we go forward in examining the character traits of a political party that has transformed itself into a national cult, I will be discussing it at ever greater lengths. But a story, just released in the Telegraph – revealing the un-glamourous truth of the economic casualties of Hollywood’s latest bent Robin Hood, was too powerful not to include in my ‘Democrats Gone Wild’ and ‘Hollywood Idiots’ categories.

I’m referring to the critically acclaimed Martin Scorsese film, “The Wolf Of Wall Street”, in which Leonardo DiCaprio plays Jordan Belfort, a conniving and rapacious securities broker, who in his own fashion was the Bernie Madoff of his era. Small distinction – Belfort’s game wasn’t a Ponzi scheme, but he was engaged in securities fraud.

Martin Scorsese is a Democrat. He has endorsed the Democratic Senatorial Campaign Committee, Hillary Rodham Clinton for US Senate Committee, Obama for America and Green Mountain PAC. No surprise there. Then there’s DiCaprio. Leo’s a hardcore Democrat, notes Hollowverse. In 2008, he donated over $38,000 to the Democratic party including directly to then-candidate Barack Obama and Leo donated at least $5,000 to Obama’s re-election campaign.

So, without getting into the weeds – everyone associated with the production of this film is a Democrat. What’s notable about this is that the film celebrates and lionizes the criminality, extreme sex, perversion and drug fueled lifestyle of Belfort. As the Telegraph, notes, there were private jets, luxury mansions, bodyguards, champagne, wild sex – once while lying on a makeshift mattress comprised of $3 million in banknotes – poolside parties, prostitutes, and, in Belfort’s words, “enough drugs to sedate Guatemala”. At one point, he was hooked on 22 different drugs, including Cocaine and Quaaludes.

The sex, drugs, and indecency? – that’s no surprise. That fits the mold of the Hollywood identity and the values of the Democrat Party to a T. But unbridled glorification of the predatory instincts of Wall Street ‘investment’ brokers? Affirming avarice, conspicuous consumption, and lifestyles centered on self-indulgence? Really, when you think about it, even though it defies the self-defined image Democrats have gone to great lengths to popularize and portray – the persona of Jordan Belfort depicted in the film, quite aptly mirrors the moral void of Hollywood, Wall Street and Democrats – the aspirational ethic of Alistair Crowley‘s satanic creed, “Do what Thou wilt, shall be the whole of the Law.”

I thought it would be interesting to attempt to identify the particular trope that best defines Jordan Belfort’s temperament and character traits in real life and in terms of what so endears him to Democrat movie goers. There doesn’t seem to be one that accurately describes him, but this – “The Loveable Rogue”, from ‘TV Tropes’ comes closest:

“A person who breaks the law, for their own personal profit, but is nice enough and charming enough to allow the audience to root for them, especially if they don’t kill or otherwise seriously harm anyone. It helps that none of their victims are anyone we know or that they’ve made sure the audience knew they were jerks, which makes it “okay” to steal from them.”

The problem for those of us who still think that funding a profligate lifestyle with the ill-gotten revenue derived from graft and larceny, is indecent and sociopathic, is that we don’t see the romance or the ‘lovableness’ of a scumbag like Belfort, the way liberal moviegoers in Los Angeles and New York do. But the lifestyles of the rich and Democrat are quite familiar to us. While Democrats decry the income gap and the plight of the poor, what really captures their imagination and latent admiration, is the scoundrel who amasses wealth illegally and leverages the proceeds to purchase luxury jets, mansions, cocaine, hookers and all the other trappings of new money. If the Democrats really buy their own narrative about equal outcomes, income equality, fairness and all the rest of that manure they constantly shovel – shouldn’t Belfort be depicted as a scoundrel? Don’t answer – the question was rhetorical.

At this point, I’d like to introduce, via the Telegraph’s excellent reporting, the reality of Belfort’s victims – because the movie never stops to even contemplate, that in order for Belfort and his cronies to indulge in their ‘excess of riot’ – there has to be individuals on the opposite side of these transactions whose trust has been maliciously betrayed and whose finances have been ravaged.

Belfort’s 1,500 victims, including Mr. Robert Shearin, are furious that the con man, who has admitted he was a “greed-fuelled animal” while on Wall Street, has failed to pay back the money he scammed, despite a $110 million restitution order by a federal judge, part of his sentence for fraud and money laundering in 2003.

“It’s really time for people to stop glorifying the crooks on Wall Street and for justice to be done,” said Diane Nygaard, a securities and investment fraud lawyer in Kansas City, Missouri, who has represented a number of Belfort’s victims.

“I was appalled at DiCaprio because he clearly doesn’t have a clue as to the heartache this con man cost so many hard-working Americans … I wouldn’t trust him for an inch. I think the film should be called ‘My Adventures with other People’s Money’ because that’s what it boils down to. You can steal more money with a pen than you can a gun.”

LA Weekly published an open letter by Christina McDowell, the daughter of a lawyer Belfort worked with, in which she described the hard realities of those victimized by the shady penny stock dealings of Belfort. She excoriates Scorsese and DiCaprio:

“Your film is a reckless attempt at continuing to pretend that these sorts of schemes are entertaining, even as the country is reeling from yet another round of Wall Street scandals”.

And DiCaprio doesn’t deny this. In fact, he admits the charge. “We purposely didn’t show (Belfort’s) victims. We wanted the film to be a hypnotic ride the audience gets on so they get lost in this world and not see the destruction left in the wake of this giant ship of greed.” As one of the human flotsam and jetsom of Belfort’s and the movie audience’s ‘hypnotic ride’, Mr Shearin resents the way the film seems to glory in its protagonist’s crimes, playing his hedonistic lifestyle for laughs.

“The harm that was done to people around Belfort, and to the small investors, and what that meant – you see none of that. His depiction in this movie is annoying and disturbing, because it makes him more into a mythical figure and skips the reality of what he was about. And what he was about was harming people financially.”

People like Belfort are more comfortable with lies than truth. Lies become the tools that, combined with a lack of conscience, enable them to prey on the fears and desires of unwary investors and separate them from their money. That is an important part of the Jordan Belfort story, in fact, the most important part, but it’s missing from the film.

“More comfortable with lies than the truth.” What possible better description of Hillary Clinton? Hillary – the darling of Belfort’s Wall Street progeny, the big-money denizens who coughed up $500,000 at two events hosted by Goldman Sachs and hundreds of thousands more from private equity houses, The Carlyle Group and KKR, each of whose profits are sensitive to changes in tax laws and regulations, which Hillary could favorably influence as President. What better description of Barack Obama, Harry Reid and Nancy Pelosi, who conspired in private meetings, to create a government backed cartel of the biggest players in the Healthcare industrial complex – the result being Obamacare? What better description of the blind followers of the cult of the Democrat party?

If ever the Republican party was exclusively the party of ‘fat cats’, collusion to enrich political benefactors and amoral greed, it hasn’t had a lock on that distinction for nearly a century. But oft repeated myths seem to die hard. In a bizarre final touch to Scorsese’s film, DiCaprio endorses Belfort’s ‘motivational training’ business in a promotional clip:

The seduction of Scorsese and DiCaprio by this heartless thief, does give one pause to wonder. Belfort is a man who was nailed by the FBI and the Securities and Exchange Commission, resulting in Belfort pleading guilty to 10 counts of securities fraud and money laundering. He was sentenced to four years in prison but was released after just 22 months, having cut a deal with prosecutors for leniency in return for turning over a number of cronies and agreeing to make restitution. But Belfort has hedged and stonewalled restitution for his economic crime victims. Only under threat of a pending court order, has he pledged to turn over profits from his book and other collateral income related to the movie.

Belfort’s lifestyle is hardly spartan, nor has he ever experienced the hardships he inflicted on others. He’s living in high style just two blocks from the Pacific Ocean, in one of Los Angeles’ most upscale suburbs, Manhattan Beach. Sort of reminds me of the line from that song by Billy Preston – “I’ve got a story ain’t got no morals. Let the bad guy win every once in awhile.” Will it ‘go round in circles’? Yes, unfortunately it has and it will, because the gasoline that fuels America – its economy and its political processes, is High Octane, Unleaded corruption.

And thanks to Scorsese and DiCaprio, we’ve been afforded a look at the authentic values of the Democrat party and its Hollywood / Wall Street Axis – the values of Jordan Belfort, Wolf of Wall Street.