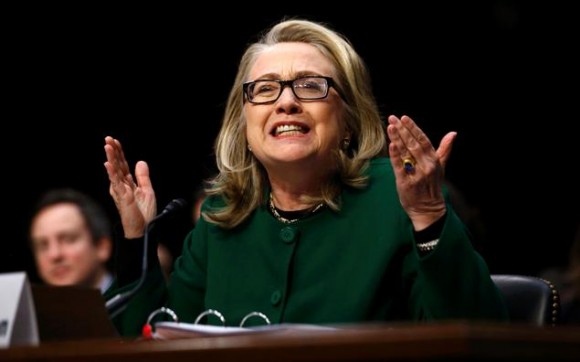 The media have discovered a scandal they can eagerly embrace, and they are off to the races. Having already found him guilty, they are now trying to determine if New Jersey Republican Governor Chris Christie knew about or ordered his underlings to create traffic jams entering the George Washington Bridge, from Ft. Lee, New Jersey into New York City; or to threaten to withhold Superstorm Sandy funds from Hoboken, NJ unless the mayor agreed to play ball with a developer with ties to the governor; or if he created a culture whereby all that could happen. Yet few are asking the parallel questions of Hillary Clinton. While those are all valid questions for Christie, the fact remains that Mrs. Clinton was in charge of the State Department during the September 11, 2012 terrorist attacks in Benghazi, which the recent SSCI report determined “were likely preventable.” Did she create a culture at the State Department that would allow these attacks to occur? Or is the answer, “What difference at this point does it make?”

One person who is getting blamed in the media is Chris Stevens, the ambassador to Libya at the time, who was murdered by the terrorists when they attacked the Temporary Mission Facility in Benghazi. Sean Smith was another casualty there. Liberals like Piers Morgan and MSNBC’s Katty Kay are among a number of journalists who have basically blamed Stevens for his own death, as did The New York Times, and third-rate comedian Bill Maher, who wouldn’t be worth mentioning, except that Time Warner sees fit to give him a weekly one-hour show on HBO to spew his venomous ignorance on a range of topics.

How was it Ambassador Stevens’ fault that he and the others died? According to the SSCI report, “General Ham called Ambassador Stevens and asked if the Embassy needed the SST [Site Security Team] from the U.S. military, but Stevens told Ham it did not.” And, again, “Shortly thereafter, Stevens traveled to Germany for a previously scheduled meeting with Ham at AFRICOM headquarters. Ham again offered to sustain the SST at the meeting, and Stevens again declined.”

How does this evidence stack up against reports that he had pleaded, repeatedly, for additional security?

Here is what the record shows: The U.S. Mission had been attacked twice earlier in the year. The British and Red Cross had pulled out before the attacks. On July 9, 2012, Stevens sent a cable requesting additional security support, so that the Tripoli Embassy would have 13 security support personnel. The cable mentions Department of Defense SST as a possibility.

On August 16, another cable was sent, to the attention of Hillary Clinton, who claims she never saw it. The cable reportedly said that al Qaeda had training camps in Benghazi, and the senior security officer at the U.S. Mission in Benghazi didn’t believe the Mission could be protected or defended against a “coordinated attack.” The State Department had signed a contract with the Blue Mountain Group out of Wales, which provided security of sorts. Unarmed security. The only armed security was supplied by the February 17th Martyrs Brigade, a Libyan militia group of which Greg Hicks, the State Department’s deputy chief of mission in Libya at the time of the attacks, said, “Certainly elements of that militia were complicit in the attacks.”

What changed for Stevens between July and August? The August 16 Emergency Action Committee (EAC) cable that prompted Ham to ask Ambassador Stevens about accepting the SST back remains classified. We now know from the SSCI report that a CIA officer briefed the EAC in August “on the location of approximately ten Islamist militias and [Al Qaeda] training camps within Benghazi.”

We also know from former Regional Security Officer in Tripoli Eric Nordstrom that the State Department was opposed to additional military support. “Mr. Nordstrom told the Committee that Ms. [Charlene] Lamb claimed [an extension of the SST] would be embarrassing and give Libya more security agents than in Yemen and Pakistan,” according to the “Additional Views” of six Republican senators on the committee, who issued their own summary as part of the SSCI report. Lamb was the State Department official responsible for managing Diplomatic Security programs designed to protect all of the international missions from terrorism and other threats. Such political considerations should not have outweighed the value of the lives of those in Libya.

So while there is some word-of-mouth testimony that Stevens said no to additional security, wasn’t it up to the State Department higher ups, those who created the culture, to protect their diplomats? There is always the Chief of Mission responsibility for his or her own people, but could State have been applying pressure for Ambassador Stevens not to accept the military support? They certainly applied pressure on Nordstrom.

According to the unified findings of the SSCI, the State Department could have prevented this attack given the “known security shortfalls” and “significant strategic…warnings from the Intelligence Community about the deteriorating security situation in Libya.” But why blame a building? According to the minority view, Hillary Clinton was due a share of the blame: “Ultimately, however, the final responsibility for security at diplomatic facilities lies with the former Secretary of State, Hillary Clinton.”

When will the media start chasing Hillary, and spending hours of prime time television questioning the culture she created at State, and going line by line through what everyone said? No, instead they try to tell us that this is a phony scandal, no one cares about it, and as MSNBC host Chris Hayes said, “it is time to say good-bye, RIP, Benghazi scandal. There is nothing left.”

Nothing could be further from the truth.