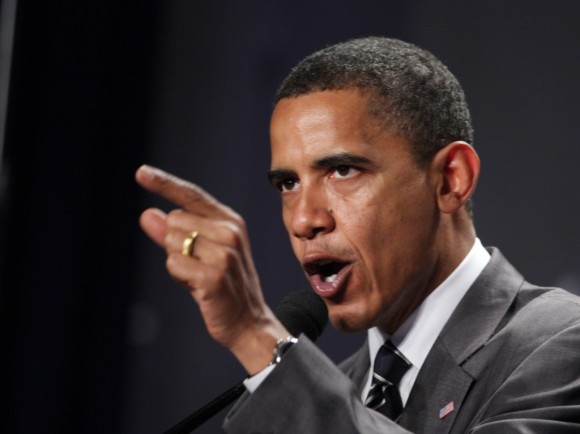 The Washington Post has a front page article glorifying communist folksinger Pete Seeger, and quoting him as saying that he regretted his support for the mass-murdering Soviet dictator Joseph Stalin. One of Stalin’s greatest crimes was starving millions of people to death in Ukraine.

“Folk singer wanted everyone to be heard” was the headline over the Seeger article. But everyone in Seeger’s world did not include the victims of communism.

Inside the Post, on page four, there’s a photo of a protester playing the guitar and singing in front of riot police in Ukraine, where an anti-communist revolution is underway. Here’s a folk singer standing up for the truly oppressed.

The contrast between the articles not only illustrates the curious news judgment at the paper, but the fact that Seeger wasn’t on the right side in the battle between freedom and communism. But is President Obama?

Seeger has passed away, but his supporters, such as President Obama, still seem to be on the wrong side of history. President Reagan believed in the liberation of the communist world; Obama seems oblivious to how Russian President Vladimir Putin is trying to reconstitute the Soviet empire.

Obama’s only mention of the revolt in Ukraine in his State of the Union address was this line: “In Ukraine, we stand for the principle that all people have the right to express themselves freely and peacefully and to have a say in their country’s future.”

On the eve of the Olympics in Sochi, Russia, it was apparent that Obama didn’t want to offend Vladimir Putin, whose puppet, President Viktor Yanukovych, has presided over a bloody crackdown on pro-democracy demonstrators. They had even toppled a statue of Soviet state founder Vladimir Lenin in Ukraine’s capital city, Kiev.

Obama is willing to stand up to Putin over an anti-gay propaganda law in Russia, but not when it concerns the fate of 46 million people in Ukraine wanting to be part of the Western alliance of free nations.

In contrast to Obama’s mere 28 words about Ukraine, an official “Statement by the President on the Passing of Pete Seeger” was 120 words in length: “Once called ‘America’s tuning fork,’ Pete Seeger believed deeply in the power of song. But more importantly, he believed in the power of community—to stand up for what’s right, speak out against what’s wrong, and move this country closer to the America he knew we could be. Over the years, Pete used his voice—and his hammer—to strike blows for workers’ rights and civil rights; world peace and environmental conservation. And he always invited us to sing along. For reminding us where we come from and showing us where we need to go, we will always be grateful to Pete Seeger. Michelle and I send our thoughts and prayers to Pete’s family and all those who loved him.”

The flowery tribute completely ignores Seeger’s service to the communist cause.

Fortunately, the liberal Washington Post editorial board sees the situation in Ukraine in terms that have somehow escaped Obama. “The West must break Ukraine free from Mr. Putin’s grasp,” was the headline over a January 21 editorial. It said, “Washington also ought to recognize Mr. Putin’s role in attempting to impose his autocratic model on a country that has been struggling to become a genuine democracy.”

But Obama, for some strange reason, cannot bring himself to say anything close to that. And he is supposed to be the leader of the “Free World.”

The Post article about Seeger danced around his involvement in the Communist Party, suggesting he may have just been a “sympathizer” and unfairly targeted in the “Red Scare.”

It’s not necessary to consult the records of the House Committee on Un-American Activities, which document his party membership. A “Pete Seeger Appreciation Page” admits that Seeger “joined the [Communist] Party in 1942 and would depart about 1950…” Another entry discusses his tour of the Soviet Union in 1965. It’s not really clear when—or if—he ever gave up communism.

Al Jazeera America has run an article titled, “In defense of Pete Seeger, American Communist.” It is by a “neo-Marxist” named Bhaskar Sunkara, who faulted Dylan Matthews of The Washington Post for saying, “I love and will miss Pete Seeger but let’s not gloss over that fact that he was an actual Stalinist.”

This attitude may help explain the indifference of many, including Obama, to Stalin’s bloody legacy in Ukraine and the need to aggressively support freedom there. Obama was tutored by Communist Party operative Frank Marshall Davis during his growing-up years in Hawaii.

Not surprisingly, Sunkara was the subject of a laudatory article in The New York Times in 2013 headlined, “A Young Publisher Takes Marx Into the Mainstream.” The paper said his friends included MSNBC host Chris Hayes.

Sunkara’s article on the Al Jazeera website did have an interesting piece of information that helps to shed some light on what’s going on in the Obama administration. It said, “Along with Angela Davis and other prominent former Communist Party members, he [Seeger] helped form the Committees of Correspondence for Democracy and Socialism, a democratic socialist group, in 1991.” This was a spin-off from the Communist Party after the fall of the Soviet Union.

The Bay Area branch of the CCDS held a fundraiser in February 2006 featuring a local activist named Van Jones, who would later become an official of the Obama White House. He resigned when his communist background came to light, but now works for CNN.

Obama, who hired Van Jones, remains in office, refusing to vigorously support the freedom struggle in Ukraine, and instead paying homage to a Stalinist. Why isn’t this a big story for our media?