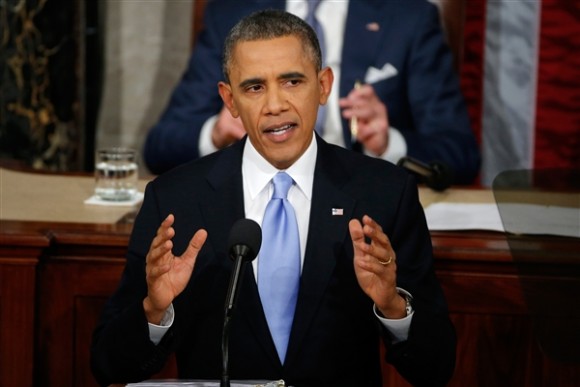 While it is clear that President Obama can successfully deliver a State of the Union speech (SOTU), especially with a teleprompter, does it matter whether or not he is telling the American people the truth, or being hypocritical? Or have politics and political reporting become so cynical, that all that matters is style and partisanship? The media that allow this to happen are complicit in these lies, because, as in the Obama administration itself, there is no accountability for them. ABC News purportedly claimed to be “fact-checking” Obama’s statements, yet sometimes they still gave him a “mostly fact” label at the top and then, in the little text—which fewer people are going to read—explained why what he said is cherry-picked, to say the least.

Obama’s State of the Union address has drawn mixed reviews. “Virtually every item in the president’s speech had been heard before and introduced with greater passion and urgency in the past,” commented Jonathan S. Tobin for Commentary Magazine.

Tobin took Obama to task for his foreign policy claims on Iran and Syria: “On foreign policy, his strongest words were delivered in a threat to veto new economic sanctions on Iran that he thinks will upset his diplomatic outreach to the Islamist regime. His drive for détente with Iran—bolstered by false claims about inspections and Iran destroying its uranium stockpile—seems to fire him up but his chutzpah in proclaiming Syria—where he endured total humiliation in 2013—as a triumph for his policies shows just how shockingly removed from reality this administration has become.”

The speech may have been a rehashing of old narratives, but what is so stunning is that his media backers simply ignore his distortions and obfuscations, and re-direct public attention to other issues, such as whether or not he lived up to his leaked narrative of defiantly announcing plans to govern by fiat, and just work around Congress.

Others were full of praise for the speech. “Given the hand-wringing and rancor of the past decade, this was a fresh breeze,” wrote Joe Klein for Time magazine. “It informed the rest of the speech: we’re doing ok, but there are things—not monster things, simple things—that we can do to make this a jollier place.” Dismissing concerns about health care and the deficit, Paul Krugman wrote in The New York Times that “Anyway, the point is that despite his low poll numbers, time is on Obama’s side, and he knows it.” As for Politico, one of their stories focuses on the political subtexts that the speech provided Democrats looking to win the elections in 2014, including how to sell Obamacare to the public.

The opening moments of Obama’s speech included several lies and distortions. For example, he bragged about the lowest unemployment rate in five years as a positive development. But in reality, the only reason the number is low is because so many people have dropped out of the work force. Even ABC News labeled this a “Fact, with a big caveat.” The labor participation rate is actually the lowest since 1978. And according to The Wall Street Journal’s MarketWatch, the real unemployment rate is closer to 15%. And last November, a census worker said that he had been told by higher-ups to make up information that would improve the unemployment rate just before the 2012 election, adding further suspicion to the administration’s figures.

Obama claimed that our energy production is the highest ever, and our foreign oil imports are the lowest. The deception in that case is that this occurred in spite of his policies, not because of them. It is part technology, and partly a result of what is being done on private land. His administration has, in fact, made it much more difficult to drill and has refused to approve the Keystone XL Pipeline. “The rise in domestic oil production, to the point where the U.S. uses more domestic than foreign oil, is mostly due to improved drilling technology, not government policy,” concludes CBS News.

One statement that should elicit an outburst from every American is Obama’s claim that “our deficits [have been] cut by more than half…” “By the time fiscal year 2009 was finished, the actual deficit turned out to be over $1.4 trillion—the highest in U.S. history. And deficits remained over $1 trillion for the next three fiscal years,” notes USA Today. “The deficit for fiscal year 2013 (which ended Sept. 30) fell to $680 billion. That’s indeed less than half the 2009 figure, but it’s still higher than any full-year deficit for any previous president.” That means the current deficit even exceeds President George W. Bush’s largest deficit, hardly a cause for celebration.

Regarding Iran, the President said that “it is American diplomacy, backed by pressure, that has halted the progress of Iran’s nuclear program—and rolled back parts of that program—for the very first time in a decade.” This came the day before the Director of National Intelligence James Clapper testified that “These technical advancements strengthen our assessment that Iran has the scientific, technical, and industrial capacity to eventually produce nuclear weapons. This makes the central issue its political will to do so” (emphasis added). Even Politico reported that the “political will” of Iran’s leaders is the primary obstacle to Iran creating nuclear weapons, a far cry from Obama’s “halted progress.”

“And although Iran is required to shut down its advanced centrifuges, it doesn’t have to get rid of any of them” during the deal, reports Politico. “In addition, Iran can build an unlimited number of less sophisticated centrifuges even while the temporary deal is in place.”

When it comes to Obamacare, once again, the administration is throwing sand in people’s eyes by stating false, misleading and unknowable statistics. For example, Obama said that “More than nine million Americans have signed up for private health insurance or Medicaid coverage—nine million.” According to USA Today, “The 9 million figure includes three groups: 2.1 million Americans who have chosen insurance plans on the federal or state marketplaces, 3.9 million who were determined eligible for Medicaid and the Children’s Health Insurance Program, and an estimated 3.1 million young adults under age 26 who joined their parents’ plans as a result of the Affordable Care Act’s requirements.” Yet, millions of Americans signing up for Medicaid or CHIP may have been, in part, the result of renewals. And how many of those not eligible for government programs who signed up on the exchanges lost their private insurance because of so-called Obamacare “reforms” in the first place? The Wall Street Journal estimated that to be quite a high number.

One more item. The President said in his speech that “It’s time to do away with workplace policies that belong in a ‘Mad Men’ episode.” He was referring to a previous, but long discredited claim he had just repeated that “they still make 77 cents for every dollar a man earns. That is wrong, and in 2014, it’s an embarrassment. A woman deserves equal pay for equal work.”

Ed Morrissey of the popular website Hot Air has an excellent rebuttal, citing studies, and a leading feminist who point out the flaws in that statement. Those figures are not comparing apples to apples.

A McClatchy article cited by Morrissey points out that the 77-cent figure comparison is for “all workers regardless of what jobs they hold—not one worker in one particular job compared with another worker in the same job.” Yet when they asked the White House the following day why women working at the White House make only 91 cents for every dollar men make who work there, the White House answer, according to McClatchy, was that “it should be measured by how it pays men and women in the same jobs, but not the kind of broad brush that compares overall male and female pay.” In other words, “Don’t judge us by the standards that we are judging others.” Hypocrisy. Mendacity.

The problem for Obama is that numerous news organizations, including ones that support him most of the time, produce SOTU fact-checks. And in some cases, they universally point to lie after lie, though they rarely call them that.

For example, USA Today, the Associated Press and The Washington Post all agree that the Obamacare numbers were frankly just not true. ABC News apparently missed the nine-million-person mistake. The news media don’t outright call these examples lies, but what are they if not lies?

Maybe the answer can be found in a new column by historian and political commentator Victor Davis Hanson: “Without notions of objective truth there can never be lies, just competing narratives and discourses. Stories that supposedly serve the noble majority are true; those that supposedly don’t become lies—the facts are irrelevant.”

So who cares if Obama is lying, if he is serving the noble majority?