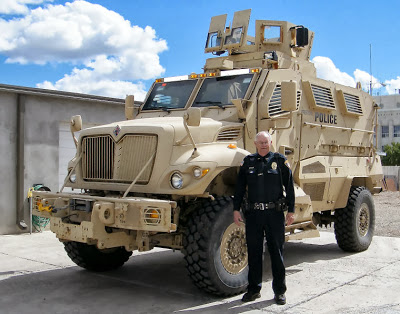 What the hell is going on in Idaho? When I was there, I knew there was a “Progressive” infiltration in the state, but since I left, it appears the state has gone a dark shade of blue with deep red commie politics surfacing.

I started seeing warning signs last year, not long after I left. Chief Ken Geddes of Preston, Idaho, a small town of about 5,000 which has about as much crime as Mayberry, decided that ravenous hordes of rioters could descend on his hamlet and asked for and received an MRAP to defend the good people of Preston. He’s far from alone… every two-bit burg out there is getting their own military weaponry and donning stylish fascist attire. The DHS was more than glad to help him out and prevent an impending redneck apocalypse. Free of charge, because we just can’t risk bands of roving zombie constitutionalists out there, ya know. Safety first.

“There isn’t much violent crime in Preston – but how much does it take?” Chief Geddes responded. “There wasn’t much crime in that little Connecticut town [Newton] before Sandy Hook – but it would have been nice if they would have had an MRAP on the day of the school shooting.”

He also took issue with the assumption that because Preston is small and relatively tranquil, his department doesn’t need to expand its paramilitary capacity: “Boise has a much larger population, and much larger police force, and much greater capacity than we do – but are we to believe that the people in Boise are more valuable than the people in Preston?” This assessment of relative value omits rational calculations of risk. It also assumes that enhancing police capacity conduces to public safety, which is at very best a thoroughly questionable assumption.

Although the advertised law enforcement purpose served by MRAPs and other armored vehicles is force protection, Chief Geddes suggests that the vehicle could also be used to evacuate citizens who are threatened by an active shooter. That claim is robustly implausible: There isn’t a recorded instance in which a SWAT team responding to an active shooter made anything other than “officer safety” its chief operational priority, and Preston isn’t likely to set a precedent – assuming that such a situation were ever to arise in that bucolic southeastern Idaho town.

Chief Geddes points out that his department and the Franklin County Sheriff’s Office (which is headquartered in Preston) are receiving training and assistance from “a military agency” regarding the operation and maintenance of the MRAP. This blending of functions and equipment summons concerns about law enforcement militarization that the Chief quickly and impatiently dismisses.

Despite Geddes denials, it is painfully obvious he is goosestepping to another tune. Not only that, but how dare the riffraff criticize his militarization of the police – they should be grateful – I’m not kidding:

In an op-ed column he wrote for the Preston Citizen newspaper, Chief Geddes admonished the public to be “thankful” for [the] Pentagon’s generosity in providing the MRAP to his department: “I appreciate our government and our military for the security they give us and for their help to increase our strength here in our schools and home.”

Enter the Powell Doctrine – this should make every American pause, wipe the sweat from their brow and deeply experience a cold shudder down their spines:

“General Colin Powell’s Doctrine of the U.S. Armed Forces is that the United States should be the `meanest dog in town’ to frighten a potential enemy,” wrote career law enforcement officer –and SWAT instructor — Edward Leach in the October 2001 issue of Police Chief magazine. “When force is used, it should be with `overwhelming strength and no half-way measures.’ In law enforcement, these principles are routinely applied in both field and tactical operations. … Law enforcement [application] of the Powell Doctrine is clear: have overwhelming and superior resources available, primarily as a deterrent, but use them decisively when needed.”

Leach, who until a year ago was Undersheriff of Idaho’s Kootenai County, unabashedly depicted police as a military occupation force. He doubtless understands the message being sent when police in a town the size of Preston acquire a combat-grade armored vehicle. So should we.

War, children, is just a shout away… There is now a bill before the Idaho State Legislature (HB 367). This unconstitutional piece of Marxist crap would for all intents and purposes abolish the Posse Comitatus Act in Idaho and allow the National Guard to “assist federal and state law enforcement agencies in interdicting the importation of controlled substances,” while also reveling in the spoils of “civil asset forfeiture.” If this comes to pass, the National Guard will be allowed to act as a “state law enforcement agency” and they will participate in divvying up property seized or forfeited to the feds.

William Norman Grigg had this to add:

While visiting the elite Battle Command Training Program at Fort Leavenworth, “I head discussion of the Posse Comitatus Act, which forbids the National Guard to act as a local police force,” reported Robert D. Kaplan in his 1996 book An Empire Wilderness. “The implication was that turbulence within the United States might one day require the act to be repealed.”

During a discussion of the use of the military to suppress domestic terrorism, a Marine major declared: “The minute I heard about Oklahoma City, I knew who did it – rednecks, the kind of guys from southern Idaho.” That officer went on to predict that owing to the presence of such turbulent people “`a time may come when the military will have to go domestic,’” Kaplan related.

The amendment containing this enhancement of the Guard’s mission, significantly, would be inserted just above an existing provision allowing county sheriffs to enlist the aid of the Guard to deal with “any breach of the peace, tumult, riot, resistance to process of this state, or a state of extreme emergency, or imminent danger thereof….”

Translated into practical terms, this would allow any of the state’s 44 sheriffs to seek the assistance of the National Guard any time they anticipate resistance to a forfeiture action. After all, everybody in Idaho has guns, a fact that has been invoked by police officials across the state to justify the acquisition of combat-grade armored vehicles from the Pentagon. This means that any time law enforcement sets out to steal somebody’s property through “asset forfeiture” – something that was recently done as part of a federal investigation into “illegal” card games at a private residence – there is “imminent danger” of armed resistance.

Republican state representative Linden Bateman of Idaho Falls (which, for the record, is in southern Idaho) told the Idaho Reporter that “There seemed to be no major opposition to this bill” in the Legislature. Gov. Butch Otter has reportedly read and approved the draft measure. No objections have been heard from Idaho’s “constitutional sheriffs” – the officials who resolved to oppose new federal gun restrictions, but whose independence is neutralized by their dependency on federally supported asset forfeiture.

Get that? No one is opposing this fascist piece of legislation. No one. I’ll remind everyone that Gov. Otter is a Republican who brandishes a sterling reputation in the state. He’s not a true conservative – he’s a Progressive on the Right. He made financial deals with the Chinese communists and he went whole hog on Obamacare. The man is bought and paid for. And while gun laws in Idaho are among the best in the country, this bill could do away with all that, as well as just about every other right citizens have.

It appears to be moving forward – the House committee has advanced the bill giving domestic police powers to the National Guard:

“There seemed to be no major opposition to this bill,” commented Rep. Linden Bateman, R-Idaho Falls. “It seems like a good idea to me and I supported it.”

The bill also seeks to formalize what is known as the Idaho National Guard Counter Drug Support Program by declaring that it may “assist federal and state law enforcement agencies in interdicting the importation of controlled substances into this state.”

Additionally, the bill declares that the military unit will be “deemed a state law enforcement agency for the purpose of participating in the sharing of property seized or forfeited and receive property and revenues.”

Alarmed is an understatement here. Idahoans should fear their government. This is exactly what Obama and the Marxists had in mind when they ‘transformed’ America. And it looks like Idaho will open the door to martial law and gun confiscation with nary a peep of protest. Can the rest of America be far behind? The nullification of the Posse Comitatus Act is the death knell for the Republic. Idaho better wake up – your freedom is inches from being gone.

The Idaho House of Representatives has chosen to not vote on legislation that was unanimously approved by a legislative committee just last week. House Bill 367, which would significantly broaden the role of the Idaho National Guard to include domestic policing powers, passed on a voice vote in the House Transportation and Defense Committee on Jan. 23.

With the House scheduled to vote on the bill Tuesday, Majority Leader Mike Moyle, R-Star, noted from the floor that some House members had identified “problems” with the legislation. “Mr. Speaker,” Moyle stated, “I request unanimous consent that House Bill 367 be returned to the committee for amending.” Speaker of the House Scott Bedke, R-Oakley, granted that the bill be returned.

When reached for comment after the House floor session, Moyle told IdahoReporter.com that “I didn’t like the military police power component of the bill. I didn’t like that at all.” When asked about prospective amendments to House BIll 367, or a new bill to replace it, Moyle stated “I understand what was being attempted here, I get the fiscal angle on this. But I do not know at this point if there will be a new bill to replace it.”

Problems? This is a hell of a lot more than ‘problems.’ What troubles me was the unanimous voice vote on this and the politicos saying they saw no problem with it. This beast will be back, count on it. Idaho, you are not out of the woods on this. You are being targeted by jack booted Progressives.

***Whereas the Posse Comitatus Act does not technically cover the National Guard, that was modified in 1981 amidst great outcry, I might add… this does go directly towards the militarization of police and the vast expansion and use of the National Guard. The National Guard was meant to help in times of emergency, not act as a civilian military force at the beck and call of politicians who are more than willing to violate our constitutional rights. There have been numerous violations of Posse Comitatus over the last few years and in my opinion, furthering the deployment of the National Guard other than for legitimate emergencies is a violation of our rights.