Attorney Cleta Mitchell represents True the Vote, TEA Party Patriots and numerous others in the IRS targeting scandal. In the interview below, she is testifying before the House Government Reform and Oversight Committee. She tells Congress that the IRS has lied, that lying to Congress is a criminal act, a felony and she wants the FBI to investigate. She says the DOJ investigation is a “sham, a non-existent investigation.” Ever American should be asking why Congressman Darrell Issa (R-CA) why Congress is not dealing a harder, harsher hand. Why is there no Select Committee? Why is the FBI not investigating? Where are the subpoenas? Why aren’t you doing something with the truth you already know? Why has Lois Lerner not been given immunity, or whatever is needed, to force her to testify? Are we really so impotent — as impotent as we were in Fast and Furious, and as impotent as we are in Benghazi? Remember this: when the Oval Office changes, hopefully to another political party, the IRS needs to be scrubbed cleaned of all leadership, and downsized. 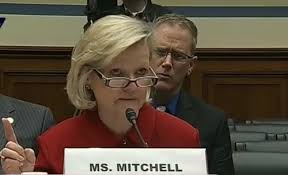 With regard to point No. 1, let me tell you in one sentence what the IRS scandal is. The IRS, at the direction of some political elites in Washington, not in Cincinnati, but Washington, took what had been, for decades, a process of reviewing applications for exempt status, that 501(c)(4) statuses could be expected to take three to four weeks, and they converted that process, into one that three to four years, and in some cases, is still not over.

No. 2 – The line agents in the IRS had their work disrupted or halted by Washington. In 2010, True The Vote filed their application for (3)(c) status and did not obtain that (3)(c) status until we sued the IRS, so in September, they granted it. People shouldn’t have to sue to get their tax exempt status. When Lois Lerner and President Obama accused line agents in Cincinnati of being responsible, ladies and gentlement, that is a lie. I knew when Lois Lerner said that in May of 2010, when she admitted that it was happening, after we knew it was happening, sort of like, we knew we were targeted, it’s just that she finally admitted it, but I knew it hadn’t happened in Cincinnati, because the first time I became aware of this was with a group that I represent.

We filed for tax exempt status in October 2009, and besides cashing our check for a filing fee, we did not hear from the IRS until June of 2010, and we didn’t hear from Cincinnati. We heard from Washington. That group did one thing. It lobbied against ObamaCare. In the Fall of 2009, in the Spring of 2010, something that a 501(c)(4) organization is permitted to spend 100 percent of its program expenditures doing, we did not get the tax exempt status for that organization until July of 2013.

When I took on the representation of Catherine Englebrecht and her two organizations in the Fall of 2011, this is now a year after she has sent her application to the IRS and she’s heard nothing, and when I talked to the assigned agent in Cincinnati, in October of 2011, saying we’re going to supplement the application to help make it easier to process, he told me at the time, ‘Oh, there’s a task force in Washington. We can’t do anything until we hear back from Washington.

No. 3, this scandal is not over. The lying has not stopped. I represent one TEA Party group, TEA Party Patriots, who applied in December of 2010, they still don’t have their (c)(4) status. There are lies upon lies in this ugly episode. The Commissioner of the IRS lied to Congress, lied…I believe it was this Committee in March of 2012 or April 2012, he said there was no targeting. How many communications from the IRS to Congress, who inquired about this status of application and whether there was targeting — how many communications were there, in which agents of the IRS told Congress that there was no targeting? Those are lies. Lying to Congress is a crime. The Department of Justice has refused to investigate who it was that was responsible for releasing the confidential tax information of Koch Industries to the President’s Economic Advisor who in turn released it to the press. Or who released the National Organization of Marriages tax returns? I represent NOM. We sued the IRS to try to get to the bottom of why our confidential tax information was made available to our political opponents. Where’s the FBI, in investigating? That’s a criminal offense. It’s a criminal offense to also for the IRS to release the confidential donor information of the Texas Public Policy Foundation, and the Republican Governor’s Public Policy Council — conservative organization’s donor information was released by the IRS — that’s a criminal offense. Who’s investigating that?

And then finally, the lies, again, it is a lie, a felony, to lie to a federal agency, and yet the IRS, on the day after Thanksgiving, imposing these regulations, the agent for the IRS who transmitted those proposed regulations in the formal publication says, there are no related documents. That’s what it says on the website — related documents — none, yet I had submitted a four-year request on behalf of TEA Party Patriots for the underlying background documents, and they said, we can’t get you all those documents until April. The public comment period closes February 27th, so there are no documents, but it will take them till April to get them to us. That’s a lie, and they also lied when they transmitted those regulations, when they said the purpose of those regulations — the genesis was — [inaudible name of a Report]. There are too many lies, Mr. Chairman. It’s time to get to the truth. It’s time for the FBI to investigate these criminal acts, and it’s time for the IRS to cooperate as we try to get to the truth of why it has happened and how to make it stop. Thank You.

One thought on “Cleta Mitchell Testifying on IRS Scandal: Lies Upon Lies, Not BoneHeaded Bureaucrats, It’s Not Over”