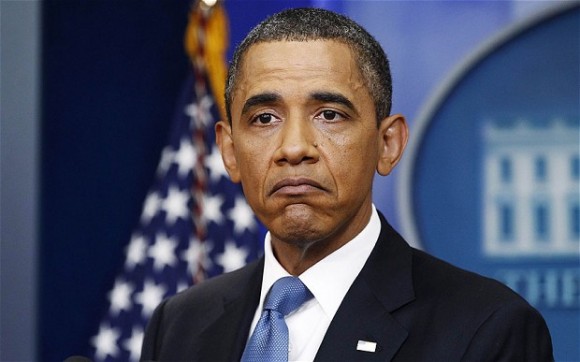 The media and Obama administration are at it again, trying to defend their earlier actions on Benghazi. For weeks following the September 11, 2012 attacks, President Obama and his colleagues blamed them on a spontaneous demonstration inspired by protests in Cairo, a position that has been repeatedly found to be patently untrue.

But Obama would prefer that the American public ignore this and his other “phony” scandals. In fact, he told Bill O’Reilly in a recent pre-Super Bowl interview that scandals like the IRS controversy are the result of irresponsible reporting by Fox News. “These kinds of things keep on surfacing in part because you and your TV station will promote them,” he told O’Reilly.

In an effort to convince us that Benghazi is not a scandal, Obama, arguing with O’Reilly, once again attempted to defend his completely indefensible narrative that in fact he said from day one that it was a terrorist attack (or in his words, “an act of terror”), and that the decision to claim the attack was the result of a spontaneous demonstration, sparked by an anti-Islam video, was made with the best information available.

As Accuracy in Media has reported, General Carter Ham, head of AFRICOM, told then-Secretary of Defense Leon Panetta on the night of the attacks that there was a terrorist attack, not a spontaneous demonstration, in Benghazi. When asked about that, Obama maintained that Secretary Panetta told him that evening that it was just a plain “attack.”

O’Reilly pressed the point. “Understand, by definition, Bill, when somebody is attacking our compound, that’s an act of terror, which is how I characterized it the day after it happened,” responded President Obama. “So, the question ends up being, who in fact was attacking us?”

It turns out, according to a recently released Senate Select Committee on Intelligence report, that the attackers were a mix of low-level terrorists: “Individuals affiliated with terrorist groups, including [Al Qaeda in the Islamic Maghreb], Ansar al-Sharia, [Al Qaeda in the Arabian Peninsula], and the Mohammad Jamal Network, participated in the September 11, 2012 attacks,” states the report. Ansar al Sharia was recently designated a foreign terrorist organization by the administration.

But Obama still characterizes the attack differently. “What happens is you have an attack like this taking place, and you have a mix of folks who just are troublemakers, you have folks who have an ideological agenda, you have some who are affiliated with terrorist organizations, you have some that are not,” he said.

Indeed, the SSCI report classifies the attack as “not a highly coordinated plot, but…opportunistic.”

However, to claim that that they couldn’t classify it as a terrorist attack at the time is disingenuous. Senator Lindsey Graham (R-SC) recently revealed that the FBI interviewed witnesses to the attacks on September 15, 16, and 17, and “not one person ever mentioned anything other than a terrorist attack. No one mentioned a protest outside the consulate.” Sen. Graham is backed up by the findings of the bipartisan “Flashing Red” report of December 2012. Yet the myth of a spontaneous protest in Benghazi lives on.

And the debate could be seen on MSNBC, when in a post-State of the Union segment that included an interview with Representative Tim Huelskamp (R-KS), Rachel Maddow was left babbling, seemingly trying to turn the debate into a “War on Women” issue by suggesting that the congressman was being sexist in calling her a cheerleader. Maddow had just finished asking the congressman whether he had voted for bills that slashed funding for diplomatic posts in response to his outrage about Benghazi.

But that is a phony issue, and Maddow must know that. State Department official Charlene Lamb had testified before the House that funding had nothing to do with the decisions surrounding Benghazi’s ongoing poor security.

Maddow: “Did you just call me a cheerleader?”

Rep. Huelskamp: “I don’t know, maybe you have that history. I’m saying—”

Rep. Huelskamp: “When you’re a cheerleader for the administration, you’re not being a journalist. When you’re not willing to look at the facts. If it was Bush, you would be jumping and screaming.”

Rep. Huelskamp made it clear that he was calling Maddow a cheerleader for the Obama administration. And, given her history, who could deny that?

Then Mr. Thrill-up-his-leg Chris Matthews jumped in to claim that the SSCI report was a vindication of President Obama’s and Susan Rice’s position on Benghazi.

Clearly, Matthews either doesn’t know what’s in the report, or he’s just doing his usual defend-Obama-at-all-costs routine. “And also, by the way, the non-partisan—or bipartisan, Senate Intelligence Committee has completely verified everything that Susan Rice said, every point,” contended Matthews. “[The attack] was caused by a copycat attack coming from Cairo over to Benghazi, which was itself stimulated by all the evidence they have by that crazy movie guy making a movie out in Los Angeles,” he continued. “And the fact that the use of the term extremist rather than terrorist came from the CIA, and the non-reference to the al Qaeda was a decision by the sainted General Petraeus at the CIA. Everything was done right.”

But wait. Didn’t President Obama call it an “act of terror” from day one? If he knew it was a terrorist act, and not a spontaneous demonstration, why did Susan Rice, speaking on his behalf, say otherwise?

“Some intelligence suggests the attacks were likely put together in short order, following that day’s violent protests in Cairo against an inflammatory video, suggesting that these and other terrorist groups could conduct similar attacks with little advance warning,” states the report. This has been used by some to say that the spontaneous demonstration narrative is true.

However, the report does not call the attack a “copycat” attack, as Matthews does. In fact, the report says that “intelligence analysts inaccurately referred to the presence of a protest at the [Benghazi] Mission facility…” and didn’t rely enough on eyewitness statements in their data collection.

As stated before, the eyewitnesses called it a terrorist attack in their interviews with the FBI. Former Deputy Chief of Mission in Libya Gregory Hicks characterized the YouTube video as a “non-event in Libya” in his testimony before the House.

Clearly, some controversy remains over these points, and the difference in opinion appears to be between those sitting in their offices that night in the nation’s capital, who tried to spin the least harmful narrative two months before a presidential election, and those on the ground in Libya at the time. To suggest that Obama and Rice did everything right, and that they did not mislead the public, is also disingenuous on Matthews’ part.