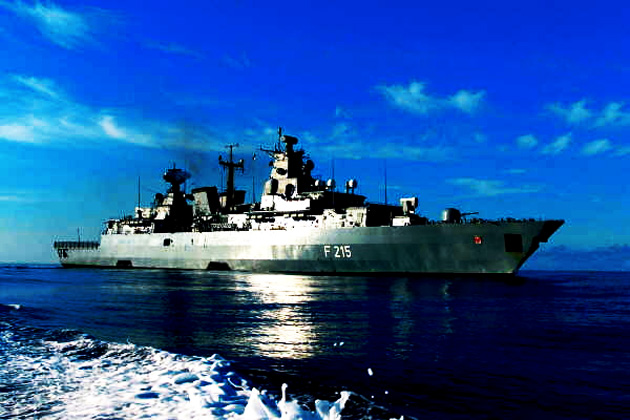 Bearing a message of peace and benevolence (right…), Iran says their warships are now headed towards US maritime borders and in fact, have already entered the Atlantic Ocean via the waters near South Africa. Time to break out the welcome baskets – the Iranians are coming.

The fleet, which consists of a destroyer and a helicopter-carrying supply ship, shoved off last month from the southern Iranian port city of Bandar Abbas. The ships are carrying some 30 navy academy cadets, supposedly for training, along with their regular crews. Instead of a three hour cruise, these sailors are on a three-month mission. This move is in response to the US naval deployments near its own coastlines. Emboldened by a weak US President and a weakened super power in general, the Iranians are poking the badger with no expectation of the Americans defending themselves. Why should they worry? It’s nukes and EMPs away and the most Obama would do is hit the golf course one more time.

The Ayatollah Ali Khamenei is basically thumbing his Islamic nose at the US:

Fars first reported on an Iranian Navy fleet of warships making its way across the Atlantic Ocean in January 2014. At the time, they reported that the ships would sail for at least three months.

Hours earlier, Iran’s Supreme Leader Ayatollah Ali Khamenei said on Saturday the United States would overthrow the Iranian government if it could, adding Washington had a “controlling and meddlesome” attitude towards the Islamic Republic, Iranian media reported.

In a speech to mark the 35th anniversary of the 1979 Islamic Revolution, Khamenei, the most powerful figure in Iran, added that officials seeking to revive the economy should not rely on an eventual lifting of sanctions but rather on homegrown innovation.

“American officials publicly say they do not seek regime change in Iran. That’s a lie. They wouldn’t hesitate a moment if they could do it,” he was quoted as saying by the semi-official Fars news agency.

Khamenei made no mention of talks between Iran and world powers intended to settle a decade-old dispute about the Islamic Republic’s nuclear program.

But he reiterated that in dealing with “enemies,” Iran should be prepared to change tactics but not compromise on its main principles.

“The solution to our economic problems is not looking out and having the sanctions lifted,” he added. “My advice to our officials, as ever, is to rely on infinite indigenous potentials.”

He added: “Our [hostile] stance toward the United States is due to its controlling and meddlesome attitude.”

Khamenei’s comments about hostility reflect his long-standing animosity towards the United States, seen as the arch-enemy by Iranian authorities. The US and Iran have had no official ties since 1980 after Iranian students occupied the US embassy in Tehran, taking 52 diplomats hostage in protest against Washington’s admission of the former Shah after he was toppled by the Islamic Revolution.

But Khamenei has given his guarded support to the nuclear negotiations being led by the new reformist government of President Hassan Rouhani and Foreign Minister Mohammad Javad Zarif.

No wonder Obama trusts them and defends the theocratic thugs so aggressively. I mean, they would never attack the infidels. Right. They hate us, just as Obama hates us. Both would revel in the fall of America and in having death rain down on the Great and Little Satans. They’re working on that and we are holding the door for murderous lunatics. Who needs suicide bombers when you have a complicit, treacherous President at the helm? You say potato, I say terrorist.

But, wait for it… It gets even better! Iranian TV just aired a simulated bombing of Tel Aviv and a US aircraft carrier. But give ’em nukes baby! A clip shows simulated strikes on Tel Aviv, Haifa, Ben Gurion Airport, the Dimona nuclear reactor and the USS Abraham Lincoln in retaliation for a hypothetical attack against Iran. I say, grant their wish posthaste.

In the computerized video, Iran uses drones and missiles on the Great and Little Satans. They also hit American targets in the Persian Gulf.

The Iranians are sneering at us and calling us fools and liars:

The clip was broadcast amid a clear escalation of anti-American rhetoric and even action by Iran: On Saturday, an Iranian admiral announced that Iran had despatched warships to the North Atlantic, while Iran’s spiritual leader Ayatollah Ali Khamenei denounced the Americans as liars who, while professing to be friends of Iran, would bring down his regime if they could. He also said it was “amusing” that the US thought Iran would reduce its “defensive capabilities.”

The film, entitled “The Nightmare of Vultures,” opens with Supreme Leader Khamenei addressing military academy graduates in 2011, warning: “Anybody who thinks of attacking the Islamic Republic of Iran should be prepared to receive strong slaps and iron fists from the Armed Forces.”

“And America, its regional puppets and its guard dog – the Zionist regime – should know that the response of the Iranian nation to any kind of aggression, attacks or even threats will be a response that will make them collapse from within,” the film shows him saying.

The strike on the Israel’s central command building is shown taking place while former prime minister Ehud Olmert and former defense minister Amir Peretz — who served in that capacity during the 2006 Second Lebanon War — are inside convening a meeting.

The clips of drone strikes on Israel are interspersed with shots of Israeli emergency personnel evacuating injured Israeli civilians and soldiers while air raid sirens wail.

A barrage of missiles brings down Tel Aviv’s skyscrapers in a final blow.

Afterwards, Iranian drones and missiles are shown attacking the American aircraft carrier USS Abraham Lincoln on its way through the Strait of Hormuz into the Persian Gulf. Iranian drones are shown downing several American aircraft before sinking the US capital ship. Zooming out to a map of the Middle East marked with US military bases, Iranian missiles are then shown striking American military targets across the Persian Gulf.

Still think they want nuclear capabilities for peaceful purposes? Obama has guaranteed war, which he wanted all along and his sycophants like Kerry have attended their master’s wishes willingly and with gusto. This dance just picked up the pace and is sure to be an American barn burner. Honey… the Iranians are here! And they come bearing apocalyptic gifts.

9 thoughts on “Honey… the Iranians are here!”