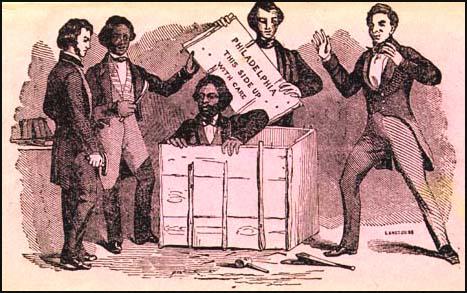 Ah, another Black History Month, or should I say Annual Bash America Month. Every year the usual suspects (Democrats and liberal media) use the month to promote hate via false narratives such as young black men are routinely hunted by whites; Conservatives and Republicans hate a commercial that features a biracial couple, and so on. You know the drill. America sucks, is eternally racist and victimizes blacks.

The left’s solution: More government freebies and special concessions for blacks, higher taxes and a stronger determination to eradicate income inequality. In other words, like MLK Day, Black History Month is simply another opportunity to exploit race to further the left’s socialist/progressive agenda.

I offer a bizarre concept. Why not celebrate BHM by featuring extraordinary blacks and their contributions? For example: In 1872 Henry Brown amazingly escaped slavery by mailing himself to freedom in a box. http://bit.ly/MtGPfm

In the 1980s, Pillsbury Company appointed successful black business executive Herman Cain to be chairman and CEO of Godfather Pizza. Cain become the CEO of the National Restaurant Association.

Herman Cain is a black conservative which by definition means he disagrees with Obama’s agenda. This disqualifies Cain, a great role model for black youths, from being featured in a Black History Month PSA.

A black entrepreneurial magazine featured Obama on its cover as a champion of black empowerment. I thought, “Are these people delusional?” Obama’s presidency has devastated entrepreneurs, especially blacks. And yet, the black publishers chose to make race trump the truth.

Race. Race. Race. Folks, my head is flooded with thoughts on this highly emotional issue which causes rational people to behave irrationally. Emotionally enslaved to racial loyalty, Christian family and friends either ignored or twisted the Bible to support Obama, despite his anti-Christian agenda; same sex marriage, abortion, banning God from the public square and forcing Christians to betray their faith.

Race is such an emotional issue. In a restaurant, a white waitress gave a chilly reply to my cheerful, “Good morning”. I know intelligent blacks, burdened with a black chip on their shoulders. They would have automatically assumed the waitress’s coldness was racially motivated. Later, white friends commented about the same waitress. “She waited on us yesterday. Man, was she cold.” Apparently, the waitress spread her unfriendly vibe indiscriminately.

For all intensive purposes, the GOP has surrendered its principles, values and the country to Obama due to racial intimidation. Remarkably, despite Obama’s unprecedented lies and scandals, race still prevents honest media coverage of his Administration.

Race is the Democrats and media’s most potent weapon to silence opposition to Obama’s war on the Constitution. I am a Tea Party activist. The left promotes the evil, divisive and irresponsible lie that my white Tea Party brothers and sisters call me a n***** behind my back.

Strong arguments exist on both sides about whether or not we should have Black History Month.

Racism will remain among the sins of humanity. But for the most part, you get what you give. Kindness and respect usually mirrors itself. Decent well-intentioned people find ways of working out their differences. I realize that this truth is too simplistic and individual-empowering for government social engineers, multicultural professors and race exploiters.

I pray for a day without PC police and race-exploiters; a day when Americans are allowed to interact like the crew of the star-ship Enterprise in the 60’s Star Trek TV show; various races living together without race being an issue.