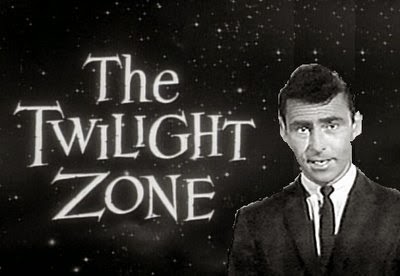 Imagine a time when young people were taught to respect their elders; but not only taught, they were expected to show that respect. There’s a sign post ahead, your next stop… the Twilight Zone.

It wasn’t long ago children were taught to say, “Thank You, Sir”, “Please”, “May I”, “Excuse me” or a host of other standard pleasantries in order to express a mutual regard for each other.

It shouldn’t surprise anyone that a fellow in Jacksonville, Florida is in big trouble after a serious confrontation with a bunch of young thugs who refused to turn down their music. You can read some of the details as reported in an A/P article, ‘Loud music’ shooter called himself ‘victim’ in jail calls.

“The Florida software designer accused of killing a black teenager during an argument over loud music compared himself to a rape victim, telling his fiancee in a recorded jailhouse phone call that the police were trying to blame him for the shooting when he was only defending himself.”

“Dunn, 47, was convicted Saturday of three counts of attempted second-degree murder for shooting at three of Davis’ friends who were all inside an SUV, but the jury hung on a first-degree murder charge for Davis’ death. Dunn, who is white, has argued that he fired at Davis after the teen threatened him and raised a shotgun or something that looked like one after he asked the teens to turn down their rap music. No shotgun was found in the SUV.”

Details were a bit sketchy as to how the incident escalated; but having a minor confrontation turn into a full blown war only takes a moment, sometimes half a moment. I’m not here to expound on the virtues of any presumed Stand Your Ground law, something which has surfaced among the politically correct media or whether or not the charges fit the crime; and surely a crime was committed; no, that’s not my purpose in writing. 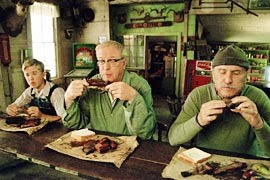 In the movie, Secondhand Lions, there’s a scene inside a general store with the McCann brothers sitting down at the counter to have lunch, their young protégé along side observing life. (This is just after Hub checked himself out of the hospital, having suffered a heart attack at the feed store while loading fifty pound sacks of lion meal into his truck.)

Several young men waltzed in and one of them was so bold as reach over and grab at the meal being enjoyed; but Hub McCann batted his hand in such a way as to challenge any further action.

[Grabs Hood 1 by the throat]

Hub: I’m Hub McCann. I’ve fought in two World Wars and countless smaller ones on three continents. I led thousands of men into battle with everything from horses and swords to artillery and tanks. I’ve seen the headwaters of the Nile, and tribes of natives no white man had ever seen before. I’ve won and lost a dozen fortunes, KILLED MANY MEN and loved only one woman with a passion a FLEA like you could never begin to understand. That’s who I am. NOW, GO HOME, BOY!”

Maybe Michael Dunn is guilty of being an anachronism and nothing more. He’s found out our society no longer teaches or expects a modicum of respect for anyone much less for those who have earned it.

Several years ago while putting gas in my truck a young man in a fancy convertible pulled up on the far side of the lot with his music so loud as to be annoying even from a distance. A police unit at the pump next to me was also filling his gas tank, oblivious to the loud music.

My warped sense of humor kicked in as I challenged the officer, “Five bucks says you can’t shoot a hole in that radio on the first shot.”, as I aimed my hand, as if it were a pistol and clicking off a shot complete with imagined recoil in the general direction of the offending vehicle.

Some officers have no sense of humor. He quickly explained that shooting out the radio was against the law. In the back of my mind a less than wholesome thought came to mind, something like “No shirt Sherlock” except the second word only sounds like shirt.

In the end we all lose; an otherwise law abiding citizen’s life has been turned upside down and he’ll probably spend several years in prison. The three surviving ‘model citizens’ will continue to play their music as loud as they want without regard for anyone because they have no respect for anyone, to include themselves.

This could have been avoided with a little civility, something we’re sorely lacking. When family values, morality and the bible are removed from the public square and schools the fabric which holds everything together falls apart.