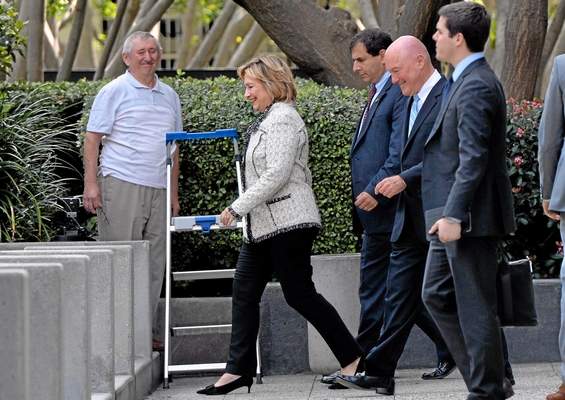 What happens when everything the Progressives have pushed for is about to fail? When economic collapse is all but imminent? What do the elitists do when their bag of tricks is emptied? Their last trick, the last card up their sleeve is the war card. Historically predictable… it always comes to this. Enter Hillary Clinton.

This has nothing to do with putting Putin in his place, as if we are in any position to do so. It’s theater, especially since I believe that not only did Obama know this was coming four months ago, he’s got an agreement with Putin and is carrying out an agenda. Obama, Kerry, Clinton and the rest don’t give a flying crap about the Ukraine. They don’t give a fig for Europe either. They care about saving their sorry asses – their wealth, power and status. Now you see Hillary comparing Putin to Hitler – legitimizing whatever the Progressives do financially or militarily. It’s just words and hype – a wink among comrades. We’ve already promised 1 billion to the Ukraine and Europe promised 15 billion this morning. With what money? Fire up the printing presses boys and load up on ink and paper!

Clinton made her comments at a private event benefiting the Boys & Girls Clubs of Long Beach.

“Now if this sounds familiar, it’s what Hitler did back in the 30s,” she said. “All the Germans that were … the ethnic Germans, the Germans by ancestry who were in places like Czechoslovakia and Romania and other places, Hitler kept saying they’re not being treated right. I must go and protect my people and that’s what’s gotten everybody so nervous.”

Putin is a man “who believes his mission is to restore Russian greatness,” Clinton said.

That includes reasserting control of what used to be countries under the former Soviet Union and the Warsaw Pact, she said.

“When he looks at Ukraine, he sees a place that he believes is by its very nature part of Mother Russia.”

If Ukraine and Russia are to reach any kind of compromise, negotiations may start in Crimea, Clinton said.

“I think that’s where the negotiations will start,” she said.

Clinton, a possible Democratic presidential candidate in 2016, also noted that Secretary of State John Kerry is in Kiev while Russia has agreed to meet with NATO in Brussels.

“So everybody is hoping that there will be a negotiation but a negotiation that respects Ukraine and doesn’t ratify a reoccupation by Russia of Crimea,” she said. “So it’s a real nail-biter, right now, but nobody wants to up the rhetoric. Everybody wants to cool it in order to find a diplomatic solution and that’s what we should be trying to do.”

She raged on about this and then went into detail on what her favorite Girl Scout cookie was. Followed by extolling the virtues of Obamacare for dessert.

Why, Hillary… I thought you said the Cold War was ancient history? Hmmm. Evidently, only when it suits your current agenda. One wonders if all of this is to appear to save the day diplomatically in the end via the US cavalry, or to lay the groundwork for war. Probably, whichever benefits the Marxists the most. Hillary is quite aware that Russia intends to extend their reach throughout Europe, with a little help from the Germans.

Meanwhile, in Russia… they test fired an IBCM yesterday, with the US claiming it was scheduled before all of this and it was routine. The Russian Defence Ministry could not be reached for comment. You know, that’s what tyrants tell us every time. Do you think anyone seriously believes you?

Putin is still building his nuclear arsenal while we have drastically cut ours. He is showing us that if we get into a pissing contest with him, he will flatten us. He considers Obama very weak and the US as no threat at all anymore. Obama is simply a useful tool to Putin and expendable in the end. He’s not alone. China thinks we are joke and Iran is outright deriding and laughing at us.

The launch site, Kapustin Yar, is near the Volga River about 450 km (280 miles) east of the Ukrainian border. Kazakhstan, a Russian ally in a post-Soviet security grouping, is further to the east.

Russia conducts test launches of its ICBMs fairly frequently and often announces the results, a practice seen as intended to remind the West of Moscow’s nuclear might and reassure Russians that President Vladimir Putin will protect them.

Russia and the United States signed the latest of a series of treaties restricting the numbers of ICBMs in 2010, but Moscow has indicated it will agree [to] further cuts in the near future and is taking steps to upgrade its nuclear arsenal.

Putin has emphasised that Russia must maintain a strong nuclear deterrent, in part because of an anti-missile shield the United States is building in Europe which Moscow says could undermine its security.

That covers the Progessives and Communist tyrants… let’s move on to the radical theocrats of Iran. The Iranians are becoming increasingly bold and arrogant after wiping the floor of the world with Obama over their nuclear development agenda. They are laughing at Obama and Kerry and making fun of the US:

“The low-IQ US president and his country’s Secretary of State John Kerry speak of the effectiveness of ‘the US options on the table’ on Iran while this phrase is mocked at and has become a joke among the Iranian nation, especially the children,” General Masoud Jazayeri said, according to the semi-official Fars News Agency.

Jazayeri was responding to the US president’s interview in Bloomberg on Sunday, in which Obama maintained that the Iranian leadership should take his “all options on the table” stance — including the warning of a potential military strike — seriously.

“We have a high degree of confidence that when they look at 35,000 US military personnel in the region that are engaged in constant training exercises under the direction of a president who already has shown himself willing to take military action in the past, that they should take my statements seriously,” the president told Bloomberg.

Jazayeri called Obama’s statements regarding the deployment of US troops “completely inexpert remarks far from the reality, and these statements can be used as the joke of the year.”

The Iranian news agency Tuesday published a political cartoon mocking the US president, calling it: “All Options on Table. This Time for Russia.” In a jab at US non-intervention in Ukraine, the cartoon portrays Obama peering forlornly into an empty paint can with the label “Red Line” while Russian President Vladimir Putin walks away saying, “I think you used it all on Syria.”

The Iranian general also issued a warning to Obama that should US forces make a move, “the region will be turned into a hell for them.”

The joke is on us it would seem. Americans are not laughing.

Today, Iran’s Revolutionary Guard says they now have multiple warhead missiles. I’m sure they had a little help from their Russian and Chinese friends. It’s all in the New Axis of Evil family – sharing is caring after all. At a ceremony on Wednesday, Defense Minister Hossein Dehghan presented four types of ballistic missiles — named Qiam, Qadr H1, Fateh-110 and Persian Gulf. The Qadr H1 and Qiam, he said, are equipped with multiple warheads, greatly boosting their destructive power. They are specifically built to target U.S. bases in the region.

And it gets even worse. While Obama is busy threatening Israel if they don’t accept his 2-state suicidal farce, Iran is really arming up Hamas with the gift of death for the Jews. This morning, the IDF intercepted a massive Gaza-bound Iranian arms shipment to Hamas via the Red Sea:

Elite troops from the Israel Navy’s Shayetet 13 unit boarded the ship in open waters on the maritime border of Sudan and Eritrea, some 1,500 km south of Israel. The Klos C Iranian vessel was sailing under a Panamanian flag, making its way to Sudan from Iran carrying a cargo of advanced rockets capable of reaching distances of up to 200 km.

The ship was supposed to reach port in Sudan on Thursday, some 10 days after it left Iran. An initial inventory by Israel revealed a large supply of rockets, including the Iranian-made 302m, which hit Haifa during the 2006 Second Lebanon War.

The rockets originated in Syria, the IDF said, where Iran is known to store large arsenals. The rockets were flown from Syria to Iran, where they were loaded on the ship that then departed for Iraq where the arms concealed in boxes of cement.

From the Iraqi port of Umm Qasr it sailed into the Red Sea around the Port of Oman, bound for Sudan. The ship’s progress was closely tracked by the IDF as it sailed.

“There is clear evidence from the ship that these are rockets for which Iran is responsible,” a senior IDF source said Wednesday. “The rockets were . . . intended for terror groups in Gaza.”

So, you see… As the evil in the world grows and Progressives, Communist tyrants and radical, insane theocrats are emboldened, war and genocide loom over us. The US sees war now as a way to save themselves, which it won’t. It will just speed up her demise. At the very least, they will try diplomacy and sanctions as if they really expected any of that to bite. The New Axis of Evil sees all of this as a way to garner power and global dominance, while cleaning house of the riffraff that have plagued their grandiose objectives for so long.

What the US should be doing, in my opinion, is pulling her troops home, beefing up her military and getting ready for what comes our way. A good start would be getting rid of the Marxists within our own borders starting this year.

4 thoughts on “When Progressives, Communist Tyrants and Radical Theocrats Start To Beat The Drums Of War…”