[VIDEO] – Tea Party vs. Establishment: Who is helping the right, and who is hurting it?

It was taken from a scanned document, and I’ve cleaned it up some to handle scanning errors and formatting problems.

It’s self-explanatory, but what’s interesting is how, sixty years downstream from its original publication, it’s still relevant and pertinent.

How To Be a Survivor – by Robert Heinlein

The Art of Staying Alive in the Atomic Age

Thought about your life insurance lately?

Wait a minute — sit back down! We don’t want to sell you any insurance.

Let’s put it another way: How’s your pioneer blood these days? Reflexes in fine shape? Muscle tone good? Or do you take a taxi to go six blocks?

How are you at catching rabbits? The old recipe goes, “First, catch the rabbit –” Suppose your supper depended on catching a rabbit? Then on building a fire without matches? Then on cooking it? What kind of shape will you be in after the corner delicatessen is atomized?

When a committee of Senators asked Dr. J. Robert Oppenheimer whether or not a single attack on the United States could kill forty million people, he testified, “I am afraid it is true.”

This is not an article about making the atom bomb safe for democracy. This is an article about you — and how you can avoid being one of the forty million knocked off in the first attack in World War III. How, if worse comes to worst, you can live through the next war, survive the aftermath, and build a new life.

If you have been reading the newspapers you are aware that World War III, if it ever comes, is expected to start with an all-out surprise attack by long-distance atomic bombing on the cities of America. General Marshall’s final report included this assumption, General Arnold has warned us against such an attack, General Spaatz has described it and told us that it is almost impossible to ward it off if it ever comes. Innumerable scientists, especially the boys who built the A-bomb, have warned us of it.

From the newspapers you may also have gathered that world affairs are not in the best of shape — the Balkans, India, Palestine, Iran, Argentina, Spain, China, The East Indies, etc., etc. — and the UNO does not seem as yet to have a stranglehold on all of the problems that could lead to another conflict.

Maybe so, maybe not — time will tell. Maybe we will form a real World State strong enough to control the atom bomb. If you are sure there will never be war again, don’t let me waste your time. But if you think it possible that another Hitler or Tojo might get hold of the atomic bomb and want to try his luck, then bend an ear and we’ll talk about how you and your kids can live through it. We’ll start with the grisly assumption that the war will come fast and hard, when it comes, killing forty million or so at once, destroying the major cities, wrecking most of our industry and utterly disorganizing the rest. We will assume a complete breakdown of government and communication which will throw the survivors — that’s you, chum! — on their own as completely as ever was Dan’l Boone.

END_OF_DOCUMENT_TOKEN_TO_BE_REPLACED

By: Red Square
The People’s Cube 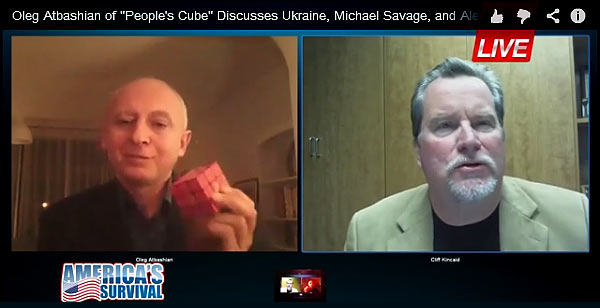 Cliff Kincaid of America’s Survival interviewed me last night about the revolution in Ukraine, the People’s Cube, Putin, Obama, and more.

Putin’s anti-American and anti-Semitic propaganda gives the Ukrainian protesters the Tea Party treatment and sets up the US foreign policy for a defeat. Unfortunately, some in the American right-wing media fall for the Kremlin’s paranoid narrative and regurgitate it to their readers and listeners.

Published on Mar 5, 2014
Commentators such as radio host Michael Savage have been claiming that the new government of Ukraine is either run or supported by “neo-Nazis.” The claim, designed to justify the invasion of Ukraine, is pure Soviet/Russian disinformation. It has the added attraction of diverting attention from Putin’s own personal embrace of anti-Semitic lies and propaganda. Go to http://www.usasurvival.org for more.

P.S.
References to Michael Savage in this interview are made with regards to this insane rant he posted on WND: PUTIN CROSSES OBAMA’S PINK LINE

Well, this is something you don’t see every day. An American anchor for Russia Today resigned live on the air.

American news anchor Liz Wahl quit her job at the state-owned TV network Russia Today live on the air Wednesday, saying she is “proud to be an American” and could no longer “be a part of a network that whitewashes the actions of Putin.”

Wahl said she is the grandchild of Hungarian refugees who fled brutal Soviet oppression.

“I am very lucky to have grown up here in the United States,” she said. “I am the daughter of a veteran, my partner is a physician at a military base, where he sees everyday the firsthand accounts of the ultimate prices that people pay for this country.”

“That is why personally I cannot be part of a network that is funded by the Russian government that whitewashes the actions of Putin. I am proud to be an American and believe in disseminating the truth. And that is why after this newscast I am resigning,” Wahl concluded.

Anytime I’ve posted a video from Russia Today (RT), I usually note that RT is a Kremlin-funded organization in the business of disseminating disinformation. Russia Today is not seen in Russia; it is produced for international consumption, and typically takes an anti-Western stance in its reporting.

By: Victor Rud
Accuracy in Media 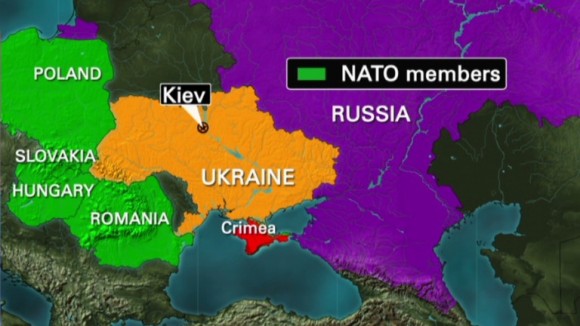 Which of the following are statements by Vladimir Putin, his Foreign Minister Sergei Lavrov or other Kremlin spokesmen, and which are by Western media, academics, politicians and commentators: “Ukraine and Russia share deep historical and cultural roots,” “Russia traces its 1,000 year history to its beginnings in Kiev,” “Ukraine is really ‘Little Russia,’” “the Russian Orthodox Church originated in Kiev,” “thousand years of Russian Christianity,” “Ukraine is a part of Russia,” “Russia and Ukraine are not separate countries,” “Russia is a thousand-year-old state,” “Kievan Russia was the beginning of the modern Russia,” and “Ukrainians and Russians are brotherly nations?”

There is no distinction between who said any of the above. Each statement has been repeated, for a century in the United States and longer by the Kremlin. Such remarkable unanimity reflects either recognition of the same historical record, or the recognition of the same historical mythology. If the latter, how and why in American academe and politics is that mythology declared with such certitude by those who should know better, thereby facilitating a historical hologram?

The question, and answer, are central to conceptualizing not just an informed American “response,” but a policy, addressing Russia’s drive to completely suborn—and possibly annex—Ukraine, thereby directly and materially affecting American security and foreign policy interests.

END_OF_DOCUMENT_TOKEN_TO_BE_REPLACED

How exactly America has gotten to this point—and how we are going to find our way back is uncertain. But we must try.

Nancy Pelosi, former Speaker of the House, is a communist.

This according to Trevor Loudon’s blockbuster book, The Enemies Within: Communists, Socialists and Progressives in the U.S. Congress. And Pelosi is just one of dozens of communists in Congress!

How exactly America has gotten to this point—and how we are going to find our way back is uncertain.

But we must try.

Step One is to impeach Pelosi’s communist-in-arms, Barack Hussein Obama.