Know who your enemies are — “The Enemies Within.” Get ready to vote them out in November.

“The Enemies Within: Communists, Socialists and Progressives in the U.S. Congress,” is like no other book written on American politics. The book exposes, in layman’s terms, the comprehensive communist, socialist and extreme progressive infiltration of the U.S. House of Representatives and the Senate.

The book profiles fourteen Senators and more than fifty Representatives and their ties to the Communist Party USA, Democratic Socialists of America, the Workers World Party and the Institute for Policy Studies, Council for a Livable World and other radical anti-American organizations. Trevor has done the hard work to connect the dots of why the U.S. Congress has moved further and further left over our lifetime and you won’t want to miss him. The Mid-Terms are coming. It’s time to clean House — and Senate! Get yourself prepared with facts. Don’t miss it!

Know your enemies — “The Enemies Within.”

Now, your representatives in Congress have been exposed, too.

“The Enemies Within: Communists, Socialists and Progressives in the U.S. Congress,” is like no other book written on American politics. The book exposes, in layman’s terms, the comprehensive communist, socialist and extreme progressive infiltration of the U.S. House of Representatives and the Senate.

The book profiles fourteen Senators and more than fifty Representatives and their ties to the Communist Party USA, Democratic Socialists of America, the Workers World Party and the Institute for Policy Studies, Council for a Livable World and other radical anti-American organizations. Trevor has done the hard work to connect the dots of why the U.S. Congress has moved further and further left over our lifetime and you won’t want to miss him. The Mid-Terms are coming. It’s time to clean House — and the Senate from the “Enemies Within.”

Trevor Loudon discusses, “The Enemies Within: Communists, Socialists and Progressives in the U.S. Congress,” with the South Pinellas County 9.12 Project.

Acclaimed author, Trevor Loudon will present volume two of his book series, “The Enemies Within: Communists, Socialists and Progressives in the U.S. Congress,” to the South Pinellas County 9.12 Project. He’ll also be signing his books and presenting a new direction for America. Trevor will explain how the real enemies of America now sit in positions of power, supposedly representing you within our own Congress, but in reality are undermining your freedom and rights! Trevor names names — with impeccably-researched sources. Don’t miss this event! Bring your friends and family. You will not regret it!

He is an internationally known blogger and researcher, noted among other things, for exposing the communist background of Obama “Green Jobs Czar” Van Jones , which led to his eventual resignation from his White House position. Loudon was also the first to publicize Barack Obama’s ties to Hawaiian Communist Party member Frank Marshall Davis.

Loudon’s research has been cited by Glenn Beck, Rush Limbaugh, countless articles, blog posts, and in books by well known authors, Paul Kengor, Aaron Klein, and Jerome Corsi. He has given countless radio interviews, and addressed audiences in more than 30 states in his four tours of the United States.

If your TEA Party, 9.12, or patriotic group would like to have Trevor Loudon speak, please contact Regina Thompson. Check out Trevor’s TOUR MAP AND SCHEDULE, constantly being updated with new events and venues. 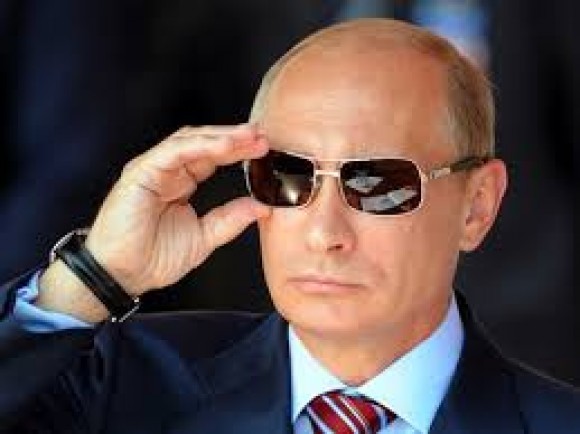 A rule of thumb for understanding Vladimir Putin’s propaganda regarding the Ukraine is to assume the truth is usually the opposite of what he says. Hence, the Nazis and anti-Semites in the conflict are not, as Putin says, part of the revolutionary, anti-communist forces in Ukraine, but rather in the Putin camp. In this case, National Review has run a very revealing article, “The Eurasianist Threat,” by Robert Zubrin, on an influential Russian thinker and Putin adviser by the name of Aleksandr Dugin.

Blogger Anton Shekhovtsov has published an article that includes a photograph of Dugin and former Ku Klux Klan leader David Duke. He reports, “The newly acquired independence of the democratic Ukrainian state is now under attack from the most imperialistic and war-mongering circles in Russia who are backing pro-Russian ultranationalists in the Crimea and are forming Russian terrorist troops for subversive operations in Ukraine. One of these circles is the neo-Eurasianist movement headed by Russian fascist Aleksandr Dugin, who is openly calling for killing Ukrainians and annexing parts of the Ukrainian state to Russia to build a fascist Eurasian Union.”

The David Duke connection with Dugin came to light after I wrote my article, “Putin’s Big Lie Against Ukraine,” noting that Duke had traveled to Russia and had written a book, The Secret Behind Communism, claiming that Jews brought Soviet communism to Russia.

Dugin is described by his supporters as a scholar who is shaping Russian geopolitical strategy. His book, The Fourth Political Theory, is said to be guiding the course of the world’s political future, as directed from the Kremlin.

A description of his book and an author’s bio states that “he currently serves on the staff of Moscow State University, and is the intellectual leader of the Eurasia Movement. For more than a decade, he has also been an advisor to Vladimir Putin and others in the Kremlin on geopolitical matters, being a vocal advocate of a return of Russian power to the global stage, to act as a counterweight to American domination.”

So when we read that Germany’s Chancellor Angela Merkel has concluded that Putin is not “in touch with reality” or “in another world,” it is important that we understand what this means.

The Wilson Center report, “Aleksandr Dugin: A Russian Version of the European Radical Right?,” by Marlene Laruelle, is helpful in this regard, and documents Dugin’s ties to Putin.

The article went on: “Dugin is strictly in favor of Russian expansionism and nationalism and is closely affiliated with the Kremlin and Russian military intelligence. He is a strong proponent of the restoration of the Russian Empire through a partitioning of the former Soviet republics and unification with Russian-speaking territories.”

One of those “former Soviet republics” is Ukraine. “We have to topple Nabucco and partition Ukraine,” Dugin said. “Ukraine has to be divided into two vassal states. We have to always be a step ahead of our rivals.”

It turns out that David Duke did run a story about his meeting with Dugin back in 2005, describing him as “one of the leading intellectuals of Russia’s patriotic movement.”

An article about Duke’s visit to Russia said, “David Duke has seen that a proud and free Russian people are a key to the survival of European mankind. He is as important to this new revolution for freedom and heritage here today as John Reed was for Bolshevik enslavement 87 years earlier.” The latter is part of the current propaganda that Soviet communism was somehow “imposed” on Russia by international bankers, code language for Jews.

In his column, “Pro-Russian network behind the anti-Ukrainian defamation campaign,” Anton Shekhovtsov dissects the phony claims from Moscow about the “far-right” supposedly being behind the Ukrainian protests. He also documents the number of Americans and others appearing on the Kremlin-funded Russia Today (RT) channel.

RT is in the news after anchor Liz Wahl resigned from the channel, saying she “cannot be part of a network funded by the Russian government that whitewashes the actions of Putin” in Ukraine.

AIM has been exposing the propaganda operations of RT for almost four years. Perhaps now there will be some awareness of what the channel has been up to and how many Americans, from the right and left, have been serving as dupes of Moscow in the U.S. Broadcaster Jerry Kenney filed a complaint in 2011 with the U.S. Department of Justice alleging that both RT and the Al-Jazeera propaganda channel were violating the law by not disclosing in their propaganda broadcasts that they are agents of foreign powers. No action was taken on this complaint.

Unfortunately, some Tea Party groups are getting disinformation about what is happening in Ukraine and what is at stake for the world.

Dr. Rick Scarborough, head of Vision America Action and Tea Party Unity, held a teleconference on Thursday featuring Doug Bandow, Senior Fellow of the Cato Institute, on “Why Crimea isn’t worth World War III: when multiple wrongs mean America should stay out.” The Cato Institute favored Permanent Normal Trade Relations for Moscow, as demanded by President Obama and various business interests. “There’s nothing at stake” in the Ukraine for the U.S., Bandow said. He called Ukraine a “fake country” and defended Russian influence over the independent nation.

Meanwhile, at a National Press Club news conference in Washington, D.C. on Wednesday, Ukrainian EuroMaidan protest leader Ruslana Lyzhychko made a passionate plea for help for her nation, and sanctions on Putin for his naked aggression. She also discussed how a protest leader was abducted and tortured by pro-Moscow thugs, in order to force a “confession” about alleged U.S. involvement in the protests to be featured in Putin’s propaganda. “Millions of people take part in protests all across the country. Ukraine and America surely does not have enough money to pay them all,” she said.

She added, “We all must unite now in order to stop this monster.”

Concerning the global stakes, Zubrin writes in National Review, “Without Ukraine, Dugin’s fascist Eurasian Union project is impossible, and sooner or later Russia itself will have to join the West and become free, leaving only a few despised and doomed islands of tyranny around the globe. But with Ukraine underfoot, the Eurasianists’ program can and will proceed, and a new Iron Curtain will fall into place imprisoning a large fraction of humanity in the grip of a monstrous totalitarian power that will become the arsenal of evil around the world for decades to come.”