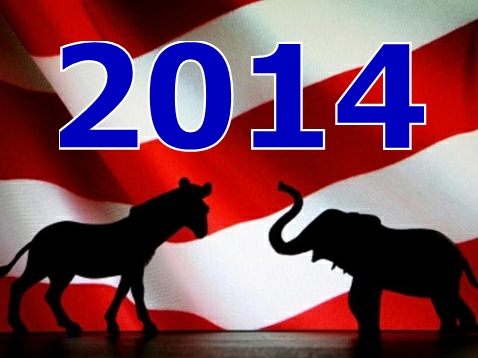 Every week on Monday morning, the Council and our invited guests weigh in at the Watcher’s Forum with short takes on a major issue of the day, the culture or daily living. This week’s question: What are Your Predictions For The 2014 Midterms?

GrEaT sAtAn”S gIrLfRiEnD: Weaponizing the IRS really pays off for the Donkey party – along with unprecedented voting fraud and ID theft.

Retaining the Senate and capturing the House allows 44 and the Reid – Pelosi posse to focus on a REAL xformation of America.

Hate Speech will be virtually ended as troublesome things like Holy Bibles and Readers Digests will be severely controlled. NPR will be granted unprecedented control of TV, Radio shows, networks, podcasts, internet forums and youtube.

The Justice Dept will create a massive task force to help determine which churches should be downsized or closed. Since tolerance is not enough, preachers that easily offend will be given mandatory means tested sensitivity training. The Prison Industry will see mammoth growth

The Peace Dividend will finally fully flower as a non essential military will downsized further. Sales of aircraft carriers and submarines to China help fund the Veterans Administration shutdown via one time payments to Vets and partial pay for surviving dependents.

The Glittering Eye: As I have been predicting for some time and as suggested by Larry Sabato’s Crystal Ball, I that Republicans will extend their control of the House slightly, probably by less than 10 seats, increase their share of the Senate, but fail to take the Senate. Right now I’m predicting a 50-50 split in the Senate which means the Senate stays Democratic and Joe Biden starts casting some deciding votes.

Unless, of course, Angus King starts caucusing with the Republicans instead of the Democrats as is now the case. We could have a situation in which Angus King is the most powerful individual in the Senate. I’m not predicting that but it’s possible.

Bookworm Room: I have no predictions. Just hopes. But I learned in 2008 that you cannot elect hope.

JoshuaPundit: I live in California, where essentially, politics no longer matter. The state’s supposedly ‘non-partisan’ redistricting process was co-opted by Democrats at its inception, and we now have jungle primaries where the top two vote getters run against each other regardless of party, so in many areas you end up with a choice of Democrat A or Democrat B in the general elections.

Voter fraud is wide spread, and will be even more blatant in the future because illegal aliens can now receive driver’s licenses and of course automatic voter registration forms, thanks to President Clinton. One of the legal ID’s used to obtain a driver’s license is a Matrícula Consular card, easily obtainable at any of the numerous Mexican consulates. if you know where to go and whom to talk to, you can obtain one for a cash fee of $50-$100 in whatever name you like, no questions asked. Not only that, but you can easily obtain a dozen or more of them if you hit various consulates, all in different names and with different addresses. Absentee ballots are easily obtained as well, and of course California has no voter ID laws.

The state’s electorate has changed as well, with many of the sort of people whom used to vote Republican having left the state. Due to the high cost of living and heavy taxation, even a lot of retirees have hit the trail for more wallet-friendly locales.

I say all this merely to provide some background.

President Obama and the regime will be prepared to go to extreme lengths in 2014, especially when it comes to the senate because the last thing he wants is actual investigations of his lawless behavior. Benghazi alone (which makes Iran-Contra look like a parking ticket) would be enough by itself to get him impeached and to see to it that Mrs. Clinton and several others never hold any position of public trust again.So I would not be surprised to see several questionable senate races end up going Democrat under suspicious circumstances..not in places where a Republican manages to win by a substantial margin, but in a few places where it’s close, especially where there’s a decent urban machine in operation to help out. Just enough to tie things up so Biden is the deciding vote, or enough of a margin, one or two seats, to keep the senate and its committees in Democrat hands.

The House will likely remain Republican, because those smaller races are harder to fix and much more localized.

What happens after that is largely due to what kind of Republicans get elected. If John Boehner remains Speaker, or if one of his acolytes like Eric Cantor takes his place, we can expect few changes. On the other hand, if the caucus rebels and picks a real leader, then you might actually see some action in investigating what’s been going on the last 5 years with a select committee.

AskMarion: I used to be the eternal optimist… cup half full kind of gal, but the past 5-years have kinda taken that out of me. But over the past month or so, I have garnered some hope and renewed optimism.

I have been watching the Millennials and they gave me my first shot of hope. They are attending Sarah Palin and other conservatives’ events and speeches. Plus their view of Obama and their future in an Obama-type world has done a 180.

This past weekend was the annual CPAC Event and there was a strong representation of Millennials, younger people in general, at the event, including Evan Feinberg, President of Generation Opportunity, who said there is war on the youth of America… on his generation! Feinberg was on the Healthcare after ObamaCare: A Practical Guide panel. Their strong presence is probably what gave Rand Paul his second win in the CPAC straw poll, but many of them are leaning further and further right.

But I have also been sensing a change, an awakening, in Americans of all ages. I belong to a political Koffee Klatch group made up of Republicans, Independents, Libertarians, Tea Partiers, a few awakened Patriots with little political affiliation until recently and even some disenchanted Democrats who are finding common ground on issues and even possibilities for the 2016 GOP ticket that I never thought possible a year ago.

And when I heard the Sarah Palin interview with Greta Van Susteran on On the Record, the night before she was giving the keynote speech at CPAC Sarah pushed me squarely into the hope dimension. She was positive about America’s future and based on her constant interaction with people all over the country, Palin said there is reason for optimism because America is waking up!

I believe that Republicans will probably keep about the same numbers in the House of Representatives that we have now, perhaps pick up a couple seats, but that we will be trading some of the ‘potted plants’and RINO’s for patriots who will stand up for Americans and stand-up to Obama. And I also predict that the Republicans will that take the Senate, but by a narrow margin, which will make Harry Reid the minority leader as best. Or as Palin said in her CPAC speech perhaps he might be dealing Black Jack in Vegas?!? 😉

And with a victory in 2014… things will begin to change for the better and it will lay the groundwork for 2016.

The Independent Sentinel: I can only predict the results of one election, the CD-1 congressional race on Long Island.

It is one crazy race.

Lee Zeldin has George Demos, a Pelosi-Republican, primarying him this June. Through marriage, Demos is financially tied to the largest Democratic donor in California who is also a business partner of Nancy Pelosi’s husband.

No one knows where Demos lives. He has run for office three times in six years, but only lives on Long Island when he is running for office. He runs ads all day long on Fox Cable News claiming Lee Zeldin voted for ObamaCare, even though he didn’t.

No one knows if Demos has a job. He has a checkered past.

Demos refuses to be interviewed or to debate.

After Zeldin wins that primary, and he will, he will go up against a Marxist Democrat, Tim Bishop, who is funded by movie stars and magnates from NYC, California, and yes, he too is supported by Pelosi-Democrats.

Eastern Suffolk County, the CD-1 district, is now predominately Democratic and Lee Zeldin is going to win despite all this.

He is going to win because in the four years he has been a state senator, he has fulfilled his campaign promises. He is honest – always and he is actually living on Long Island. He is funded primarily by people who actually live on Long Island. He has a great message of fiscal responsibility and repealing ObamaCare.

Independent Sentinel has been brought into the race, possibly because of exposes we have published about George Demos and Tim Bishop. Suddenly a shadow website to ours has been set up and they post articles under our author’s name, articles which viciously attack Lee Zeldin. The person who is doing it has some very interesting connections.

We are pursuing our legal options.

As I said, it’s one crazy race.