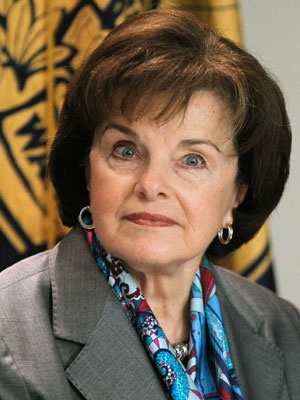 One thing you can say about Democrats. Nothing embarrasses them. Well, it would embarrass them if it could be proved they slipped up and did or said something that could be identified as sensible or honest – but they don’t have anything to worry about there. Certainly Senator Dianne Feinstein won’t be troubled or see the duplicity inherent in her vociferous complaints against the CIA. NBC News’ Katie Hunt reports:

“The CIA just went and searched the committee’s computers,” California Democrat Sen. Dianne Feinstein said in a lengthy speech on the Senate floor, calling the the matter a “defining moment” for the oversight of the Intelligence Committee.

“I have grave concerns that the CIA’s search may well have violated the separation of powers principles embodied by the United States Constitution, including the speech and debate clause. It may have undermined the Constitutional framework essential to effective congressional oversight of intelligence activity or any other government function.”

This episode tells you pretty much everything you need to know about the political class generally and Democrats in Congress, in particular. Senator Feinstein, whom we at Blasted Fools have dubbed “Feinkenstein”, displays the model traits of the inside the beltway elitist. When we complained about our 4th Amendment rights that were being decimated online and at the nation’s airports, our objections to government intrusion and overreach fell on deaf ears.

When asked earlier this year by David Gregory of NBC’s Meet The Press, whether in fact President Obama’s proposed ‘reforms’ would still permit the NSA to collect data on “billions of people around the world, Americans and foreign citizens alike”, Feinstein could only defend the travesty with this:

“Well, I would disagree with Mr. Gellman. I think that what the president has said is that he wanted to maintain the capability of the program. That, as Chairman Rogers said, it has not been abused or misused. And it is carried out by very strictly vetted and professional people.”

“Strictly vetted and professional people”? This suggests that either Feinstein is intentionally trying to deceive Mr. Gregory and the American sheeple, because she knows differently – or she herself has permitted herself to be duped by the heads of the intelligence agencies. Either one is disturbing and demonstrates her to be unfit to hold public office of any kind. But now that Senator Feinstein and her committee are at the receiving end of intelligence agency trespasses, there is indignation and outrage.

Snowden was among those that were “strictly vetted”, or so the NSA was assured by his employer, Booz(e), Allen & Hamilton (not to be confused with Hamilton, Joe Frank and Reynolds). Reuters reported in June of last year:

Before he was hired by Booz Allen Hamilton, Snowden also was screened by USIS, a Virginia-based investigations firm hired separately by the U.S. government to conduct background checks on prospective employees and contractors. Based on reports from firms such as USIS, the NSA decides whether a potential contract worker gets a security clearance.

Senator Tester of Montana, in a Senate hearing asked if concerns were overlooked in Snowden’s screening process. “Yes, we do believe that there – there may be some problems.” said Patrick McFarland, inspector general of the U.S. Office of Personnel Management. That means that obviously there were. But Senator Feinstein expects us to believe that everything is dandy at the NSA – you’ve got nothing to worry about. Now she’s worried about something she considers much more critical than your Constitutional civil liberties – the privacy and privilege of Congress when it has a particular political score to make or an axe to grind.

Don’t get me wrong – as a citizen, I am interested in the propriety and legality of CIA operations and the strong indication that the agency’s ‘enhanced’ interrogation tactics, secret prisons and rendition, violated treaties, international law, human rights and provide moral leverage for other authoritarian regimes. How long before this rogue agency culture infects domestic law enforcement? There are indications that it already has. Most interesting will be the truth or falsity of the persistent claim that enhanced interrogation produced meaningful leads in the former ‘War On Terror’.

It’s entertaining to a degree to hear Feinstein cry foul about the CIA’s hacking of the U.S. Senate Intelligence Committee’s computers. She charges that the searches may have violated the Fourth Amendment of the U.S. Constitution, the Computer Fraud and Abuse Act and an executive order that prohibits the CIA from conducting domestic searches or surveillance. How naïve must she be? Let’s not forget that history has shown repeatedly that the CIA is a preferred tool for the office of the President to execute operations that would fall in the category of violation of oath of office and high crimes and misdemeanors.

CIA chief John Brennan initially launched a blanket denial of Feinstein’s charge at a visit to one of the tentacles of the shadow government, the Council On Foreign Relations (CFR). “As far as allegations about CIA hacking into Senate computers, nothing could be further from the truth. We wouldn’t do that. That’s just beyond the scope of reason.”

Then he wasn’t as certain. “Appropriate authorities right now, both inside of CIA as well as outside of CIA, are looking at what CIA officers as well as what [Senate] staffers did. I defer to them.”

Later in an interview with NBC’s Andrea Mitchell, Brennan acknowledged the possibility that his job might be in jeopardy. “If I did something wrong, I will go to the president and I will explain to him exactly what I did, and what the findings were. And he is the one who can ask me to stay or go.”

To bring things up to date and to add to the freak show nature of this controversy, the CIA’s chief counsel has filed a complaint with the Justice Department recommending an investigation to determine if the committee violated any laws. This centers around the ‘Internal Panetta Review’. The Acting Counsel is in fact a former lawyer at the CIA Counterterrorism Center, Robert Eatinger, who himself is referred to over 1,600 times in the report. Eatinger has a history of destroying possible evidence against the agency. Feinstein’s Senate Intelligence Committee made copies of the Internal Panetta Review and removed them to a safe in the Hart Office Building.

What brought things to a head with all of this is the strong possibility that either the agency unwittingly included the IPR in it’s document dump to the Senate Committee’s computers, or that a whistleblower within the agency did so. A third possibility is the contention by the CIA that the Senate staffers in the CIA ‘Safe Room’ set up for the committee’s review process, breached the firewall the CIA had established to keep them out of the agency’s proprietary system. It was the CIA’s clumsy attempt to retrieve the IPR and the damning revelations that it contains, that is the center point of Feinstein’s denunciations of the agency and its leadership. The IPR, in detailing actions that are arguably beyond the pale, contradicts CIA claims that the interrogation methods were humane and effective.

Meanwhile, we may be seeing a perfect storm develop here along multiple lines, the most interesting of which, is the possibility of getting rid of John Brennan, whose integrity, ethics and allegiances were suspect from the very inception of his appointment as CIA director. One glaring example was the ‘coincidence’ that an employee of Brennan’s firm, The Analysis Corporation, was found by the State Department Office of Inspector General (OIG) to have accessed Barack Obama’s State Department passport files at the very time, March 2008, when Brennan was serving as an unpaid advisor for the Obama Presidential campaign. Another is Brennan’s odd perspective on radical Islam, in which he’s advocated the notion of ‘Good Jihad’ versus ‘Bad Jihad’.

The sum total of all this is that Dianne Feinstein and her colleagues’ 4th Amendment rights, as she sees them, are in a separate class from yours. It’s very similar to her concept that armed security is essential for elected officials, but effective means of protection from crime, in the form of rifles that look ‘too much like military rifles’, should be denied the plebes. That’s the measure of an elitist and the ethical failings of a species of lawmaker that needs to be purged from the ranks of Congress, just as Brennan needs to be purged from the ranks of the nation’s intelligence community.