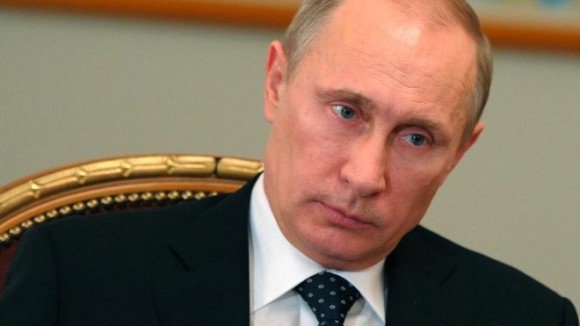 It’s hard to keep up with the Russian propaganda over the Ukraine, but a fascinating article, “Playing by Putin’s tactics,” examines some of it. The column in The Washington Post is by Molly K. McKew and Gregory A. Maniatis, who worked for Georgia’s president, Mikheil Saakashvili and his national security adviser during and after the 2008 war with Russia. However, the article offers no substantive response to what Putin is doing.

In describing how vulnerable Western media are to Putin’s propaganda over Ukraine, they note that “Itar-Tass ran a story last weekend, later picked up by Forbes and others, that 675,000 Ukrainians had recently sought political asylum in Russia.” Such absurd claims are being used by Russia to justify its invasion of Ukraine.

Not surprisingly, this ludicrous story showed up at Russia Today (RT) television under the headline, “675,000 Ukrainians pour into Russia as ‘humanitarian crisis’ looms.” RT is the Moscow-funded channel that gave WikiLeaks founder Julian Assange a TV show.

Rebecca Novick in The Huffington Post dissected the phony refugee story in the context of documenting how Russia was “creating a fake refugee crisis” in the Ukraine to justify its military intervention. She cites a Russian TV channel video showing a picture of many people crossing the border, claiming they are escaping to Russia. In fact, however, it was a picture of people crossing the Ukraine-Poland border.

The refugee crisis story was a lie from start to finish. The Twitchy site documents the number of Russian outlets picking up the story and how the claims were debunked by eyewitnesses.

In an editorial, The Washington Post says that Putin might actually believe his own Ukraine propaganda. It noted that his public comments have “become indistinguishable from the propaganda of his state television network.”

It is far more likely that he knows the stories are false, but promotes them anyway. In the words of Ukrainian activist Ruslana, they are the work of “paid liars.”

McKew and Maniatis write, “Going forward, the terms by which the world is playing are Putin’s—a reality we all must recognize and for which we need an effective response.”

One simple way to respond would be to enforce the law concerning Russian propaganda broadcasts in the U.S., which are reaching tens of millions of American homes. Media carriers for the Moscow-funded channel, which changed its name to RT from Russia Today to mask the foreign connection, include Time Warner Cable, Comcast, Verizon Fios, Cox Cable, RCN Cable, MHz Networks, and Dish Networks.

MHz, which provides RT to dozens of public TV stations, is itself a public television programming service that receives taxpayer money from the federally-funded Corporation for Public Broadcasting (CPB). In fiscal year 2011, for example, the CPB funneled $27,580,113 into MHz Networks and its affiliates.

As AIM has discussed many times over the last four years, the Foreign Agents Registration Act (FARA) is “a disclosure statute that requires persons acting as agents of foreign principals in a political or quasi-political capacity to make periodic public disclosure of their relationship with the foreign principal, as well as activities, receipts and disbursements in support of those activities.” In addition, broadcaster Jerry Kenney points out that the law mandates that the broadcasts carry a notice that they constitute propaganda on behalf of a foreign government.

But the Obama administration doesn’t enforce the law. And the tax dollars keep flowing through MHz to the public TV stations airing RT.

An unintentionally hilarious video released by RT (with my own subtitles) shows Putin reviewing his troops at the channel in Moscow.

According to RT, the propaganda is not coming from the Russians. Instead, the channel is now exposing the dangerous “lies” in the media that are supposedly being told by the American side, as revealed by a “journalist” by the name of Manuel Ochsenreiter. His claims include:

Who is Manuel Ochsenreiter? The editor of a German magazine described as “right-wing,” he seems to be a favorite of RT. He showed up in an RT story that ran under the amazing headline, “International journalists refute claims of Russian forces in Crimea.” His photo gallery shows him with a Syrian Army soldier at the Khomeini Shrine in Tehran in 2012, and interviewing a Hezbollah official.

He also happens to have published on his own website an interview with Aleksandr Dugin, the Putin adviser linked to former KKK leader David Duke, who declares:

“Russia is a liberal democracy. Take a look at the Russian constitution: We have a democratic electoral system, a functioning parliament, a free market system. The constitution is based on Western pattern. Our president Vladimir Putin rules the country in a democratic way. We are not a monarchy, we are not a dictatorship, we are not a soviet communist regime.”

But it becomes deadly serious when you examine Dugin’s views on Iran, as explained in the article, “Eurasianism, Iran, and Russia’s Foreign Policy.” Identified as the leader of the “International Eurasia Movement,” Dugin discusses a “strategic alliance” between Iran and Russia that will expand to include Turkey, China and India.

In this context, the Islamic Republic News Agency (IRNA) reports that Iran and Russia have reached a primary agreement for building two more nuclear power plants in Iran. This report doesn’t appear to be propaganda.

One thought on “How to Fight Putin’s Propaganda”