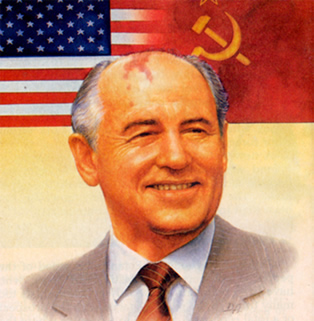 When I spoke to Trevor Loudon here in Indianapolis a few weeks ago, we both agreed that fall of the Berlin Wall was just that–meaning, it was just the dismantling of a structure that represented the divide between East and West. And certainly, at the time, many people, such as myself, viewed it all as an event we never thought we would see in our lifetime. Certainly, the images of jubilant Germans reuniting for the first time in decades was overwhelmingly emotional and an incredible sight to behold. The consensus of the day was the Cold War had officially ended. Unfortunately, it was all just a ruse.

You didn’t think all those card-carrying Communists and fellow travelers just cashed in their chips, do ya? Yeah. Oh, sure, some of them did. But Communism, i.e. Socialism, i.e. Fascism, i.e. Collectivism, is a religion. And religions die hard … real hard.

In my research into the psyops employed by the Soviets, I discovered ancient Chinese military philosopher Sun Tzu’s famous treatise on warfare, The Art of War, was required reading for our Russian comrades. Conversely, I know a few veterans have told me Sun Tzu’s The Art of War is–or was–required reading for the U.S. military as well. Anybody who knows me, knows I’m a big fan of Sun Tzu myself–at least as it pertains to Strategy, Operations and Tactics.

One of Sun Tzu’s maxims states in Chapter I, Laying Plans: “22. If your opponent is of choleric temper, seek to irritate him. Pretend to be weak, that he may grow arrogant.” Appearing weak when you are strong is an effective strategy for lulling the enemy into believing that they have nothing to fear or worry about. And it’s all based on one of the most important maxims, Chapter I, “18. All warfare is based on deception.” Yuri Bezmenov (a.k.a. Tomas Schulman), a KGB defector to the West in 1970, clearly points this out in some of his books, interviews and presentations. The Soviets prefer to call their deception and subversion “active measures”–the praxis of psychological and political warfare.

One of the most important KGB defectors to the West was Anatoliy Golitsyn. In his book, New Lies for Old, written in 1980 and published in 1984, Golitsyn predicted the fall of the Berlin Wall, the KGB changing their name and restructuring (as they have done many times in the past since the Cheka and Dzerzhinsky’s reign of terror), the rise of Mikhail Gorbachev and Boris Yeltsin–all of this some 10 years prior to the actual events taking place. Independent analysis of Golitsyn’s predictions claim a 94% success rate. He was either a prophet with supernatural abilities, or Anatoliy Golitsyn knew the future plans and ultimate goals for the phony downfall of the Soviet Union and its Eastern Bloc satellites. It was all designed to lure the United States and the West into believing that the Soviets had lost the Cold War. (I will be exploring this in much greater depth in a future article.)

The late Edward Harle (a.k.a. Christopher Story) discusses some of the background on Anatoliy Golitsyn, and Golitsyn’s books News Lies for Old and The Perestroika Deception with William H. McIlhany in the videos below: