When it comes to the “peace negotiations” with the Palestinian Arabs (to which I will return below), I’m able to sigh, and shake my head in exasperation.

But the negotiations between P5+1 and Iran? This leaves me breathless because of the dangers implicit and the willful blindness of the nations who are supposed to be stopping Iran from going nuclear. This is not just farce, it’s worse. It’s lethal game-playing. The only ones laughing are the Iranians.

Right now, P5+1, which theoretically put restrictions on Iran via an interim agreement reached in November, is negotiating a final agreement with Iran.

This is what Emily Landau, of the Institute for National Security Studies in Tel Aviv, says (emphasis added):

“According to the P5+1 negotiators, the interim deal with Iran has halted aspects of Iran’s nuclear activities and even led to some rollback of the program. Unfortunately, missing from this narrative is that in some important respects, Iran’s nuclear program is also progressing dangerously.

“The most important issue regards research and development on ever more advanced generations of Iranian centrifuges. The interim agreement did not prevent Iran from conducting R&D into any aspect of advanced new generation centrifuges, as long as it does not operate them.

“When stockpiles of low enriched uranium – which Iran continues to churn out at an increased rate – are fed into the advanced centrifuges under development, Iran will very quickly be able to enrich to the high levels needed for nuclear weapons.

“It is truly misguided to desist from delving into past military-related activities in order not to ‘upset’ the Iranians or interfere with negotiations on a new deal. Any comprehensive deal must reveal the military dimensions of Iran’s program, about which Iran has lied and cheated for decades.”

As to that R&D, see here (emphasis added):

“Iran is moving ahead with a nuclear program that U.S. officials said would be frozen, and it is now clear the USA and other world powers are willing to accept an Iranian enrichment program that Iran refuses to abandon, say analysts.

“Iran has continued research and development on new, far more efficient machines for producing uranium fuel that could power reactors or bombs, and its stockpile of low enriched uranium has actually grown, according to a report by Institute for Science and International Security.

“…Iranian oil exports have steadily risen since negotiations with the West restored confidence in Tehran’s economy. The increase runs counter to a promise by the Obama administration that ‘Iran’s oil exports will remain steady at their current level of around 1 million barrels per day.’

“…While the White House said Iran would receive no more than $7 billion in relief, these experts say that the rise in oil exports and other economic spikes will give Iran “well more than $20 billion.

“…As international markets continue to open their arms for Tehran, South Korea is reportedly set to become Iran’s next oil customer.

“…Iran is still set to cash in on $4.2 billion in cash infusions courtesy of the Obama administration, which began unfreezing these cash assets last month. Iran will receive some $450 million on March 1 and another $550 million on March 7 under the deal.”

In the face of this, it’s difficult to find anything positive to say. Yet there is a glimmer of light, and it comes from here in Israel.

On Monday, Defense Minister Moshe Ya’alon spoke at Tel Aviv University, and shared the conclusion he had come to: that when it comes to responding to Iran, Israel is on its own. 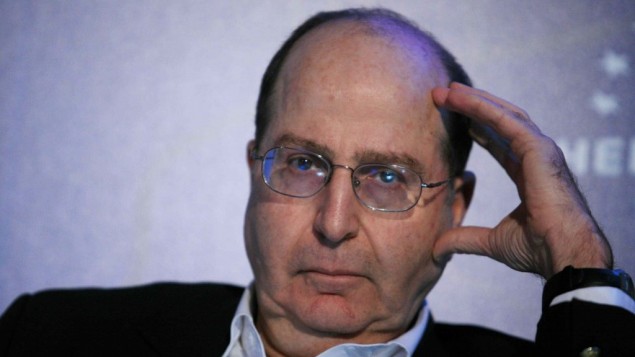 As he explained, this conclusion represents a reversal in his attitude. That reversal may have huge implications.

Prime Minister Netanyahu, as I have repeatedly pointed out, talks with clarity and forcefulness when it comes to the dangers of Iran. But half a dozen times over I’ve observed – from my laypersons’ perspective – that it appeared to be time to hit Iran. And yet there was only talk. Nu? I have wanted to ask him. Nu? and Nu?

What Ya’alon was suggesting, however, is that Netanyahu was dealing with military advice that was not in concert with his position.

Explained Barak Ravid, in Haaretz: “Under the previous government, Ya’alon had led the opposition in the security cabinet to a solo Israeli attack on Iran.”

And now the dynamic within the government has changed. Said Ya’alon:

“Therefore, on this matter, we have to behave as though we have nobody to look out for us but ourselves.”

Nor was this the end of the hard hitting observations that Ya’alon made about Iran:

“People know that Iran cheats. But comfortable Westerners prefer to put off confrontation. If possible, to next year, or the next president. But in the end, it will blow up.”

Iran had been “on its knees” but was able to extract itself from economic pressure and diplomatic isolation, via a “smile offensive.” Ya’alon said, extracting itself from crisis.

“There have been delays in the nuclear program, but the [interim] agreement is very convenient for the Iranians. They’re settling down at the threshold and can decide when to make the breakthrough to a nuclear bomb.”

Ya’alon referred as well to other ways in which Obama’s foreign policy has shown weakness in various places in the world:

“The moderate Sunni camp in the area expected the United States to support it, and to be firm, like Russia’s support for the Shi’ite axis. I heard voices of disappointment in the region. I was in Singapore and heard disappointment about China getting stronger and the US getting weaker. Look what’s happening in Ukraine, where the United States is demonstrating weakness, unfortunately.”

Ya’alon warned that if the American government continues to function internationally with weakness, the national security of the United States will be badly damaged:

Ya’alon said, finally, that American military aid to Israel needs to be “seen in proportion”:

“It isn’t a favor America is doing, it’s in their interest. They get quality intelligence and technology. We invented Iron Dome. The wings of the F-35 stealth fighter – we invented. We invented the Arrow [an anti-ballistic missile].

It is not every day that we see this sort of honesty at high levels of the government, and it is to be applauded.

I had wanted to circle back, just briefly, to matters regarding “peace negotiations” with the PA. I had missed this yesterday when writing about Abbas’s visit to the White House, but share it now because it is so exquisitely a propos:

Obama praised Abbas – who speaks of “resistance,” and promotes incitement and lauds terrorists – as “somebody who has consistently renounced violence.”

What can one say?

Dan Diker, who is a Research Fellow at the International Institute of Counterterrorism, wrote an informative piece about the positions of Abbas in the JPost today:

Abbas has been blocked, says Diker, by Jordan. Abbas had insisted that the IDF could not remain long term in the Jordan Valley (which borders Jordan). But King Abdullah of Jordan has communicated to the Americans an insistence that it be the IDF and not Palestinian Arab forces that must be at his border. It is with solid reason that he wants this, although he would be reluctant to admit it publicly.

Similarly, Abbas had demanded control of the Old City of Jerusalem, including the Temple Mount. But the peace treaty between Israel and Jordan acknowledges Jordan as being the sole custodian of the Muslim holy sites in Jerusalem – and the king today refuses to relinquish that role to the PA.

I received a link to a video last night, sent to me by a reader. It shows Arafat speaking about a Jewish state. On the chance that others may have seen this, I want to clarify:
There is no context in the video to the Arafat statement. International lawyer Alan Baker wrote about this (emphasis added):

“Arafat did not issue a clear declaration recognizing Israel as a Jewish state, but only summarized the language of UN General Assembly Resolution 181. The US government concluded that Arafat’s statement did not meet Washington’s demand that the PLO unequivocally recognize the State of Israel…”