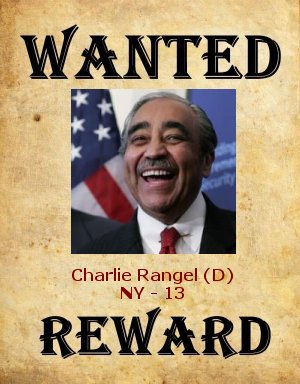 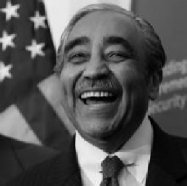 Charlie Rangel was born in New York on June 11, 1930. Raised by his mother and maternal grandfather, an elevator operator, Rangel grew up in the streets of New York. After dropping out of high school, Rangel served in the U.S. Army during the Korean War, where he was seriously wounded in battle and received the Bronze Star and Purple Heart.

After his return from Korea, Rangel enrolled at New York University, earning a B.A. in 1957 and receiving his law degree from St. John’s University Law School in 1960.

In 1961, Attorney General Robert Kennedy appointed Rangel Assistant U.S. Attorney for the Southern District of New York. In 1967, Rangel won election to the New York State Assembly and in 1971, he ran against the famous Reverend Adam Clayton Powell, Jr. in an historic election. Rangel’s victory inaugurated the first of his more than 40 years of consecutive terms as Harlem’s Representative to Congress.

In 1987, Rangel, one of the leading opponents to South African apartheid, pushed the Internal Revenue Service to eliminate tax credits for taxes paid to the apartheid government of South Africa. In 1995, he helped to create a federal “empowerment zone” in Manhattan and authored the low-income tax credit to stimulate the development of affordable housing in urban areas.

Early in 2003, Rangel proposed the reinstatement of the military draft as a way to deter the use of force and promote a peaceful resolution to the War in Iraq. In 2007, Rangel became the Chairman of the House Ways and Means Committee.

One time New York City Mayor David Dinkins rose through the Democratic Party organization in Harlem and became part of an influential group of African-American politicians that included Percy Sutton, Basil Paterson, Denny Farrell and Charles Rangel. The group ran Harlem politics for decades. Of the five, Dinkins and Farrell (a senior New York state legislator) have been members of Democratic Socialists of America (DSA), while Sutton, Patterson and Rangel leaned more towards the Communist Party USA (CPUSA).

In 1968, young people of African descent in America were growing impatient with the slow pace of social change. Despite modest advances brought on by two decades of non-violent resistance, from one end of the country to the other, the cry for Black Power was raised in the midst of a sea of clinched fists. At the same time, this new militant spirit had moved many to don black berets and carry rifles. On street corners in practically every Black community, passers-by heard demands for Nation Time and Power to the People!

The National Conference of Black Lawyers and its allied organization, the National Lawyers Guild, are the U.S. affiliates of the International Association of Democratic Lawyers.

The IADL was a “front” for the former Soviet Union and is still dominated by communist and socialist lawyers and legal organizations.

Joining WREE will be city and state officials; leaders from civil rights organizations and liberation movement, and representatives from church and women’s groups.

Women for Racial and Economic Equality was a CPUSA front. Representative Charles Rangel was among the participants.

On November 4, 1999, New York State Assemblyman Richard Gottfried (a Communist Party supporter) presented State Assembly citations to honorees, including Elizabeth Hall, a member of the National Committee of the CPUSA and her comrade Bobbie Rabinowitz, a Founder of the New York City Labor Chorus, at the People’s Weekly World 75th Anniversary celebrations at the Henry Winston Unity Auditorium in New York.

U.S. Representative Charles Rangel sent a letter regretting that he was unable to attend, but congratulated the honorees and the World.

On October 22, 2000, the People’s Weekly World held its 4th annual celebration luncheon in New York at the Henry Winston Auditorium.

A standing room only crowd gathered in Winston Unity Center, New York, on the occasion of Henry Winston’s centenary celebration. Winston, who was born in 1912, was the National Chairman of the Communist Party for two decades until his death in 1986.

The multi-media celebration of this great African American leader included speeches, music, a slideshow and greetings from former coworkers and friends – including one from New York Congressman Charles Rangel.

The first official WPC conference in the U.S. was the Dialogue on Disarmament and Détente held January 25-27, 1978, in Washington, D.C. 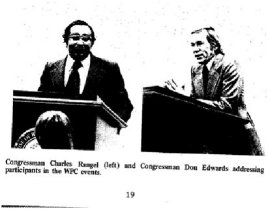 Voted Against Support for “Contras”

The Congressional Record of February 3, 1988, shows that Charlie Rangel was one of several leading Democratic Party Congressmen who voted against aid to the Nicaraguan Freedom Fighters – the “Contras” – then fighting against the Marxist-Leninist Sandinista government of Nicaragua.

In October of 1989, Nicaragua’s Marxist-Leninist Sandinista Government announced that they would no longer comply with the 19 month-old cease-fire agreement with the Contras. This had been considered a prime step forward for the “peace process” that was progressing slowly as part of the Arias Peace Plan.

A resolution was introduced in Congress deploring the Sandinistas’ action. The Senate voted unanimously in favor, but in the House the vote was 379-29. All of the 29 Congressmen voting against the resolution were Democrats.

The Council for Inter-American Security dubbed these 29 people the “Congressional Pink Caucus.” Charlie Rangel was, of course, one of them.

Charlie Rangel has long been one of communist Cuba’s best friends in the U.S. Congress.
In 1972, a coalition of Congressmen, radical activists and some communists spearheaded a drive to relax relations with Fidel Castro’s Cuba.

Under the auspices of Senator Ted Kennedy (D-MA) and Senator Harold Hughes (D-IA), a two day conference of liberal scholars assembled in April, in the New Senate Office Building to thrash out a fresh U.S. policy in Cuba.

Charlie Rangel was among the Congressional sponsors of the event.

Secretary of the New York State Communist Party, Michael Myerson, was among the observers.

In mid-1993, a meeting of the radical National Network on Cuba in Chicago endorsed a call for strong lobbying support for HR 1943, the Free Trade with Cuba Act, introduced into Congress by Charlie Rangel.

In 1994, Charlie Rangel was an initiator of the International Peace for Cuba Appeal, an affiliate of the Workers World Party dominated International Action Center. 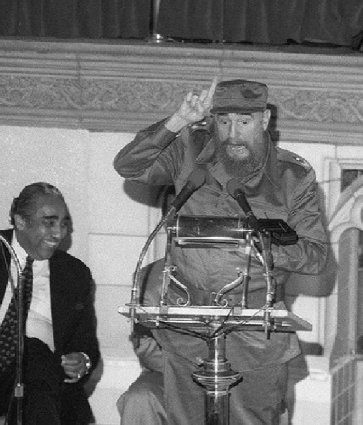 Almost 1,600 Harlemites and solidarity activists packed the Abyssinian Baptist Church to give a hero’s welcome to Fidel Castro, the president of Cuba.

The mainly African American audience, which included New York Democratic representatives Charles Rangel and Nydia Velazquez, enthusiastically greeted the Communist leader with a 10-minute standing ovation. Chants of “Cuba si, Bloqueo no!” resounded from the rafters and sent a strong message of protest to New York Mayor Rudolph Giuliani and President Clinton for excluding the Cuban leader from their sponsored events.

The audience erupted in shouts of “Fidel, Fidel” when Elombe Brath, head of the Patrice Lumumba Coalition and chair for the meeting, asked the audience, “Who would you rather come to Harlem, Fidel or Giuliani?”

Representative Charles Rangel, a frequent critic of the U.S. embargo against Cuba, met with Fidel Castro on a trip to the island in 2002, but only acknowledged that the Cuban government picked up part of the tab when pressed on the issue.

Rangel changed his travel disclosure form for the April 2002 trip and reimbursed the Cuban government and a New York grocery store owner $1,922 for his son’s expenses after the Center for Public Integrity, a nonpartisan group that focuses on open records, raised questions about the trip. House ethics rules permit private sponsors of lawmakers’ trips to cover the cost of the member of Congress and one relative – in Rangel’s case, his wife Alma, who also went on the trip.

But according to the group, Rangel initially listed a group that was conducting a bird study in Cuba at the time, the Minneapolis-based Sian Ka’an Conservation Foundation, as the sponsor of the trip. On an amended form – filed in April – Rangel added the Cuban government and grocery store owner, John Catsimatidis, as sponsors.

In 2009, John Catsimatidis of the Red Apple Group; turned up on the board of the leftist Drum Major Institute.

Rangel’s Chief of Staff, George Dalley, told the center that Rangel and his staff did not know the Cuban government had paid for part of the trip until they were contacted by the group.

“The most important thing is that Rangel corrected the mistake he made,” Dalley said.
Rangel, who met with Castro as far back as 1988 as part of a Congressional trip, reported the 2002 trip was for “education and fact finding.”

In 2004, there were 88 U.S. students at the Latin American School of Medicine in Havana – a school sponsored by the Cuban government and dedicated to training mainly Marxist doctors to treat the poor of the Western hemisphere and Africa.

The Bush administration’s restrictions on travel to Cuba had been added to the program from the beginning. Since the Cuban government paid the students’ room, board, tuition and a stipend, the ban was not initially applied to them. But the “Bush administration’s further attempts to curtail Cuban travel threatened the students and sent their families looking for political help.” Representatives Barbara Lee and Charles Rangel led a campaign of protest and 27 members of Congress signed a letter to Secretary of State Colin Powell asking that the ELAM students be exempted from the ban. In August, the administration relented and granted the students permission to remain in Cuba.