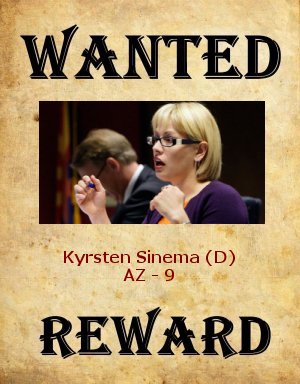 Kyrsten Sinema entered Congress with the 2012 elections as an Arizona Democrat for the new 9th District.

Sinema was born in Tucson, Arizona in 1976 and was raised in the Dobson Ranch area, in a conservative Mormon family.

At age 16, Sinema graduated as her high school’s valedictorian and went on to earn a Bachelor’s Degree in social work from Brigham Young University.

Sinema was a social worker from 1995 to 2002; she practiced in the Washington Elementary School District before becoming a criminal defense lawyer in 2005. Sinema has also been an adjunct instructor in the Arizona State University School of Social Work since 2003.
Sinema became a Democratic Arizona legislator in 2005 following a stint, in the early 2000s, as the spokesperson for Ralph Nadar’s Green Party USA.

Sinema serves on numerous community and national boards, including as Board President of Community Outreach and Advocacy for Refugees, the Center for Progressive Leadership and the Young Elected Officials’ Network. She is the recipient of awards for her political leadership, including the NAACP Civil Rights Award, AZ Hispanic Community Forum Friend of the Year, Planned Parenthood Legislative CHOICE Award, Sierra Club’s Most Valuable Player and the AZ Public Health Association Legislator of the Year.

In 2010, Kyrsten Sinema was serving her second term in the State House, teaching at Arizona State University, practicing criminal defense law while consulting with the state on LGBTQ legislation and initiatives.

Sinema was part of a national team of state elected officials who worked to help craft America’s new health care law to “meet the needs of states, not the federal government.”
Thanks in part to her work in “improving the bill,” Sinema was invited by the President to attend the signing in March of 2010.

Circa 2008, Sinema and three colleagues joined together to form a “Progressive Caucus” for the House of Representatives of the Arizona State Legislature.

In 2010, Kyrsten Sinema served on the Board of Directors of the Progressive States Network, a George Soros funded organization which seeks to “transform the political landscape by sparking progressive actions at the state level.”

Kyrsten Sinema’s first book, “Unite and Conquer: How to Build Coalitions that Win and Last,” was released in July of 2009 by Berrett-Koehler Publishers. 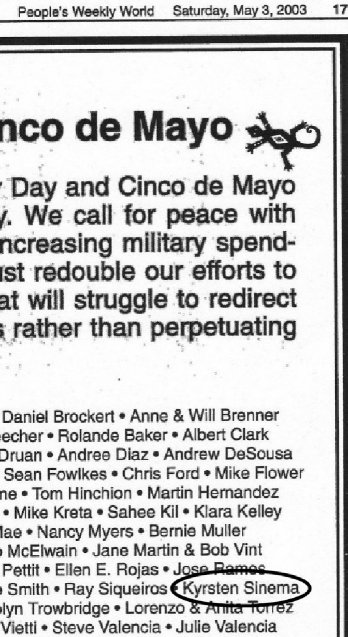 This support for the communist cause was not a “one off” or an aberration. In 2003, Sinema again put her name to the Arizona Communist Party’s May Day greetings page.

Shortly after her election in 2004, Kyrsten Sinema and former State Representative Steve May formed Arizona Together, the statewide coalition to defeat Arizona’s same-sex marriage ban, During the course of the two years leading up to the 2006 election, Sinema led the campaign’s effort to “raise nearly $3 million, research, craft and deliver a winning message and build a broad-based, statewide coalition of community leaders, organizations and businesses.”

Arizona made history on Nov. 7, 2006, when its voters became the first in the nation to reject a constitutional ban on same-sex marriage. Explained Arizona Communist Party USA leader and Arizona Together activist Joe Bernick:

So how did we do it? The answer is: educating, organizing and mobilizing.

As soon as proponents started circulating petitions to put 107 on the ballot, opponents brought out their own clipboards, signing up thousands of volunteers. Arizona Together emerged as the campaign committee, chaired by progressive state Rep. Kyrsten Sinema.

Kyrsten Sinema is the only state legislator to serve as a board member of the Institute for Policy Studies (IPS)/Democratic Socialists of America (DSA)-dominated Progressive Democrats of America.

Kyrsten Sinema was on the list of speakers at the 2008 Take Back America conference, which was organized by the IPS and DSA-initiated Campaign for America’s Future.

Kyrsten Sinema’s anti-Israel activism began in the early 2000s when she organized for the Arizona Alliance for Peace and Justice, a group whose members have denounced Israel’s “disproportionate” use of “violence and oppression.”

The group also decried U.S. military aid to Israel as well as the expansion of Israeli settlements “into Palestinian lands.”

Sinema later urged supporters of the AAPJ to deluge the phone lines of a radio show hosted by “an unapologetic unconditional supporter of Israeli policy.”

To this day, AAPJ continues to take a hardline stance against Israel, aligning itself with the far left Occupy AIPAC movement and sponsoring various speeches “against the Israeli occupation.”

Another of Sinema’s creations is Local to Global Justice, a grassroots advocacy group that has positioned itself as one of Arizona’s leading critics of the Jewish state.

In February 2004, the group brought the anti-Israel bus tour Wheels of Justice to Tempe – a junket that the Anti-Defamation League described as “distinctly anti-Israel.” The AAPJ co-sponsored the event.

Like the AAPJ, Local to Global Justice has continued to sponsor events singling out Israel for undue criticism. Sinema’s headshot remains displayed on the group’s website.

The organization has advocated in favor of the Palestinian “right of return.”

Sinema formerly served as a spokeswoman for Women in Black, an anti-war group that was founded in part to support Palestinians during the Intifada.

Council for a Livable World Support

Kyrsten Sinema was supported by the far left, anti-U.S. military Council for a Livable World in her successful 2012 Congressional campaign.

According to the Council for a Livable World website:

Outside of state government, Sinema has been a leader in Arizona’s anti-war movement. In the days after the 9/11 attacks, Sinema helped to organize Arizona progressives who were alarmed by widespread calls for invasion. Sinema was at the forefront of Arizona’s grassroots opposition to the war in Iraq.

Sinema’s principled opposition to war extends to the movement for a world free of nuclear weapons. As an Arizona state legislator she actively lobbied Senators John McCain (R) and John Kyl (R) for ratification of the New START nuclear reductions treaty. She supports ratification of the Comprehensive Nuclear Testing Ban and opposes the development of new nuclear weapons.