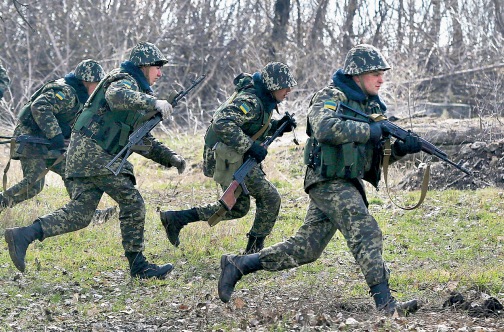 Vladimir Zhirinovsky, who is widely thought to be a mouthpiece for Putin, proposed a redrawing of the borders of western Ukraine. Color me not surprised. He says, “It’s never too late to correct historical errors.” If only, but not the way the Communists envision.

You see, Putin’s henchman wants to divvy up the Ukraine along post WWII Nazi/Soviet 1939 Molotov-Ribbentrop pact lines… gifting parts of it to Poland, Hungary and Romania. A letter was sent to all three countries making this generous offer of title and lands. It then said they could ‘join’ Mother Russia and help get the old Soviet gang back together. The letter came in the days just following the annexation of Crimea. Still think Putin doesn’t seek to tear through countries and assimilate them like the Russian Borg?

Zhirinovsky is the deputy speaker of the Duma, and his nationalist Liberal Democratic party largely backs President Vladimir Putin in the Russian parliament. If he is proposing this, it came from Putin. Anyone who thinks otherwise is kidding themselves. More from The Indepdendent:

Zhirinovsky proposed Ukraine’s Chernivtsi, Zakarpattia, Volyn, Lviv, Ternopil, Ivano-Frankivsk and Rovensky regions, together with Poland, Romania and Hungary hold referendums on whether the regions should break away from Ukraine.

Romania might wish to have Chernivtsi, Hungary the Zakarpattia region, and Poland the rest, he said.

The proposal would allow central Ukraine to be free of “ unnecessary tensions” and the referendums would “bring prosperity and tranquillity to the Ukrainian native land,” the letter said.

This letter was a threat, pure and simple. It makes an offer of territory and then Russian membership. What it doesn’t say though is the kicker… nice countries you’ve got there… take the offer or be taken anyway. How very like a Russian mobster, or perhaps in the footsteps of Genghis Khan or Attila the Hun.

Meanwhile, the G8 (now the G7) kicked Russia out of their moronic club, as if Putin gives a damn. And, oooh… scary! They threatened further toothless sanctions if Putin doesn’t behave. What? Are you going to impose sanctions against more of Putin’s enemies? Or maybe, wealthy Russians who have no assets outside of Russia – again. What a joke. Sanctions are now being threatened against vital sectors of the Russian economy: energy, banking and finance, engineering and the arms industry. Either they won’t have any teeth or will never happen as it will hurt too many pockets to do so. Screw up too many agendas. Smoke, mirrors and vodka. In the end, even if the sanctions affect Russia to an extent, it won’t hurt Putin, just the people. And Vlad is just fine with that if it advances Russian conquest.

It is what Russia will do in addition to expansionism that is very disturbing. When Russia and China cause the US dollar to no longer be the international reserve currency, the violins will begin to play. Then there is cyberwarfare, competent spycraft (which we don’t have anymore), EMPs and nukes (which Obama is doing away with) and a strong military (which Obama has gutted). And just to be sure we are at the mercy of our enemies, Obama is getting ready to abolish two highly successful missile programs that experts say have helped the U.S. Navy maintain military superiority for the past several decades — our Tomahawk and Hellfire missile programs. Still think Obama isn’t on the side of our enemies within and without? Well, let me enlighten you:

The Tomahawk missile program—known as “the world’s most advanced cruise missile”—is set to be cut by $128 million under Obama’s fiscal year 2015 budget proposal and completely eliminated by fiscal year 2016, according to budget documents released by the Navy.

In addition to the monetary cuts to the program, the number of actual Tomahawk missiles acquired by the United States would drop significantly—from 196 last year to just 100 in 2015. The number will then drop to zero in 2016.

The Navy will also be forced to cancel its acquisition of the well-regarded and highly effective Hellfire missiles in 2015, according to Obama’s proposal.

The proposed elimination of these missile programs came as a shock to lawmakers and military experts, who warned ending cutting these missiles would significantly erode America’s ability to deter enemy forces.

“Increasing our investment in munitions and retaining our technological edge in research and development should be a key component of any serious defense strategy,” he said.

The U.S. Navy relied heavily on them during the 2011 military incursion into Libya, where some 220 Tomahawks were used during the fight.

Nearly 100 of these missiles are used each year on average, meaning that the sharp cuts will cause the Tomahawk stock to be completely depleted by around 2018. This is particularly concerning to defense experts because the Pentagon does not have a replacement missile ready to take the Tomahawk’s place.

You might ask why they are doing this… there is only one logical reason — to hand us to our enemies on a silver platter. Our enemies are all ramping up their militaries and we are not just gutting ours — we are actively dismantling our military, in arms and personnel. Obama is doing what our enemies have never been able to do and quickly, while we all just sit here and watch it happen. It will be 10 years before experimental missiles come online — way too late to save us and Obama knows it. He is taking the money to keep us alive and safe and redistributing it across the planet.

So, while Obama and EU leaders pontificate and pretend to punish Russia, in actuality, it does nothing to slow down the Russian bear. Putin is confident and he is seizing the opportunity to expand Soviet rule. Divvying up the Ukraine along Nazi-Soviet lines is just foreplay for a bigger lovefest to come with the US and Europe. America – you are being led to the slaughter by a stone cold Marxist – make 2014 and 2016 count. Clean House and Senate and replace these Progressives (who as Glenn Beck aptly put it, are nothing more than patient Communists) with true Conservative leadership.