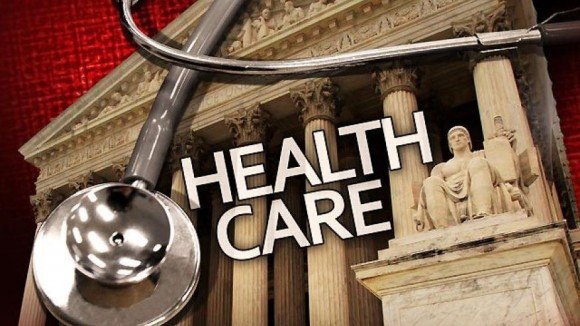 Since its passage, a number of lawsuits have attempted to undermine Obamacare as a law, with varying degrees of success. The individual mandate challenge failed before the Supreme Court in 2012, despite what seemed like positive reception to the challenge during oral argument. Hobby Lobby went before the Supreme Court on March 25 to challenge the religious liberty implications of the contraception mandate portion of the law.

While the media have largely focused on the Hobby Lobby challenge, a few blocks away, the D.C. Court of Appeals was hearing another argument about Obamacare—one that, if passed, could well have the effect of ending this law as we know it. And it has liberals running scared.

In the piece “Forget Hobby Lobby. The Bigger Legal Threat to Obamacare Still Has Life,” Alec Macgillis writes for the New Republic, “If the contraception challenge succeeds, it just means that that one sliver of Obamacare is struck down. If this other challenge succeeds, both sides agree that it would blow up the entire law.”

The argument for the plaintiffs is as follows: In order to provide the 60th vote, which was necessary to get the bill through the Senate, Ben Nelson, the then-Democratic senator from Nebraska, insisted on a clause that said that federal subsidies could only go to people who signed up on exchanges set up by the states. The purpose was to incentivize states to actually set up exchanges.

Then, the plaintiffs argue, the IRS wrote a rule in 2012 which reinterpreted the law to say that federal exchanges could give out subsidies as well. “The alternative policy under the IRS’ rewriting of the rule creates a bizarre circumstance where it’s almost impossible to fulfill the Act’s purpose of having state-run exchanges, because it eliminates any tangible incentive for these people to go ahead and adopt the exchanges,” argued Michael A. Carvin, the plaintiffs’ attorney, before the Court of Appeals on March 25. “So they’ve created a situation which has predictably resulted in only 14 states doing what Congress clearly wanted 50 states to do, which is to set up their exchanges.”

Arguably, however, the mostly Republican governors who have refused to set up exchanges also did so for political reasons.

Carter-appointed Judge Harry Edwards had a Hillary Clinton moment during the oral arguments. He demanded that Carvin “forget the subsidies” argument and explain why it was important whether the federal government or states control the exchanges. He demanded loudly, twice, “What difference does it make who does it? Forget the subsidy.”

But we can’t forget the subsidies. They are at the heart of the law, and its practice. The Washington Post has reported that “About 85 percent of those signing up for insurance in federal-run exchanges have qualified for financial assistance to purchase coverage.” In other words, this amounts to a massive federal redistribution of wealth for millions—85% of enrollees. (Let’s ignore for a moment that we have no idea how many enrollees actually purchase their insurance after “selecting” it. If they know, the federal government isn’t telling us.) “Without those subsidies, the insurance would be less affordable, leaving those with the greatest health needs with more motivation to purchase coverage,” writes the Post. “That makes for a worse risk mix, driving up the cost of insurance to cover the sicker pool of people, creating what’s known as an insurance ‘death spiral.’” The federal exchange is already at risk of a death spiral if it cannot entice enough of the young and healthy to sign up.

The case could also undo the individual mandate. “Were the case to succeed, it would mean that dozens of state governments opposed to Obamacare could significantly narrow its scope by refusing [to] set up exchanges, thus preventing residents from claiming subsidies,” explains the Washington Examiner. “In those states, employers wouldn’t be penalized for failing to offer qualifying insurance (which is triggered by workers seeking federal subsidies), meaning that anti-Obamacare states could become more attractive to businesses trying to get around the employer mandate.”

“It would also increase pressure on Congress to undo the individual mandate.”

Judge Edwards said that this was a transparent attempt by Carvin and his plaintiffs to “gut” the law. Indeed, those opposed to the lawsuit seem more concerned with saving the law than looking at the Act’s original language. MacGillis cites Clinton-appointed Judge Paul Friedman in his earlier ruling that “Plaintiffs’ proposed construction in this case—that tax credits are available only for those purchasing insurance from state-run Exchanges—runs counter to this central purpose of the ACA: to provide affordable health care to virtually all Americans…Such an interpretation would violate the basic rule of statutory construction that a court must interpret a statute in light of its history and purpose.” “Under the challengers’ logic, Judge Friedman added, the exchanges administered by the federal government ‘would have no customers, and no purpose,’” writes Macgillis. Is it really the Courts’ purview to decide whether a government program should survive, as opposed to whether the law is being executed constitutionally and legally?

Indeed, according to The Wire, without federal subsidies, “Many of those people would fall in to the hardship gap and not have to buy insurance or pay the individual mandate.” There are two other cases besides this one “challenging the authority of the IRS to rewrite the statute and allow subsidies to flow through the federal exchanges,” according to Forbes.

Never afraid of punditry, MSNBC abandoned all pretense of journalism and called this discussion of the Senate’s original intent a “drafting error.” Adam Serwer writes that “The Affordable Care Act managed to have two bad days in court on the same day,” adding that the argument means that “Congress was handing Republicans an Obamacare self-destruct button.”

Why is the ‘en banc’ ability important? Because President Obama has stacked the court, of course. “After the Democrats nuked the filibuster, Obama was able to make four appointments to the court,” writes Serwer. “Though judges’ opinions don’t always track with those of the party that appointed them, thanks to the changes to the filibuster, more Democratic appointees than Republican appointees would rule on the matter.” In other words, partisan politics would play out if the entire bench were to hear the case.

A decision is supposed to come in late June, and looks like it will be in favor of the plaintiffs. But, the Washington Examiner warns, oral arguments can be misleading. “As always, it’s hard to predict judicial outcomes based on oral arguments, a lesson that was made abundantly clear when many observers predicted that the Supreme Court would strike down the individual mandate only to see it upheld,” Philip Klein writes.