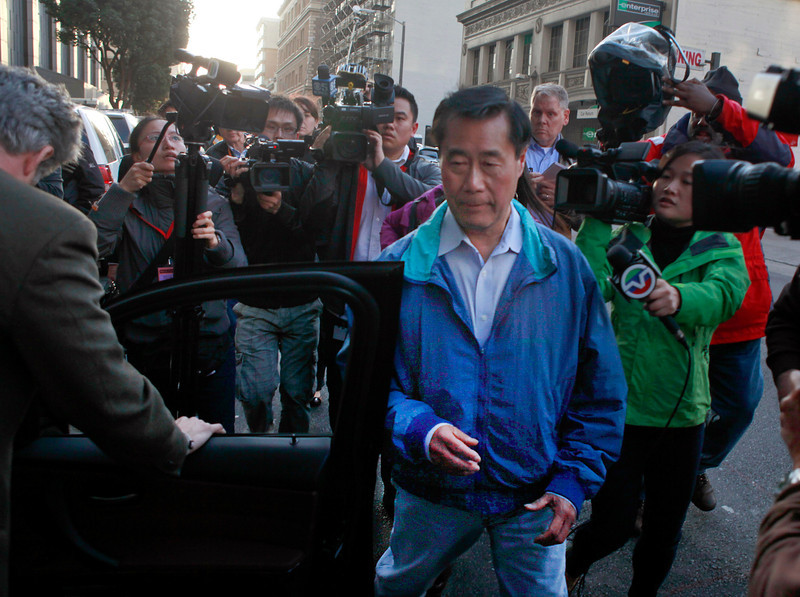 Living in the Tarnished State is a gift that just keeps giving. A most amazing, but not terribly surprising event was reported in varying degrees of detail over the last 24 hours, about a California Democrat State Senator – a major gun-control advocate. The Los Angeles Times summarizes the headline:

State Sen. Leland Yee (D-San Francisco) and a San Francisco figure known as “Shrimp Boy” were arrested Wednesday as part of a public corruption probe after a series of raids by federal and gang task force officials, the FBI confirmed. Yee, a Democrat who is also running for California secretary of state, was expected to appear in a federal courthouse in downtown San Francisco at 1:30 p.m.

FBI agents searched Yee’s state Senate office Wednesday morning but declined to comment to The Times on the nature of their investigation. Yee was taken to the courthouse in the backseat of a patrol car. San Francisco Police Chief Greg Suhr described the raids to KCBS as “massive. Hundreds of officers are involved in this,” he said.

Subsequent to this report, Mr. Yee was arraigned on charges of conspiring to commit wire fraud and traffic firearms, part of a sweeping public corruption case outlined by federal prosecutors.

Yee is quite the quintessential progressive Democrat. You couldn’t find a state legislator in California or anywhere else, with a more hard Left voting record than Senator Yee. As an example, Yee has voted for or sponsored the following pieces of legislation:

In other words, if it was a piece of gesture legislation designed to delight progressives (gun restrictions, GLBT political agenda or establishing a de-facto sanctuary state for illegals), Yee had his fingerprints on it. But here’s yet another one that puts the icing on the cake. Yee voted in favor of Senate Bill 755. SB 755 – are you ready for this? – expands the list of crimes that prohibits an individual from owning a firearm for 10 years! So, here is a guy who has been voting for bill after bill that puts a choke hold on legal gun owners in California concurring with a bill that outlines crimes that will prevent the individual convicted of them from owning a gun for 10 years!

It gets even more interesting. This guy, this State Senator that failed in his bid to become Mayor of San Francisco and was in the middle of campaigning for the statewide office of Secretary of State, already has his own criminal record! Yee was in a KTA store in Keaauhou Hawaii, in 1992 when he apparently stuffed a bottle of Tropical Blend Tan Magnifier Oil into his pocket and then under his shirt and tried to walk out of the store with it. After being stopped by a security guard, he claimed he was trying to show the bottle of suntan lotion to his wife who was waiting outside. He was arrested on the spot. When it came time for Yee’s court hearing, records show he skipped his court appearance.

And then, more recently back in San Francisco, State Senator Yee had another brush with law enforcement in 1999, the San Francisco Weekly reports:

“Although cops stopped him twice in the Mission District’s hooker-row area near Capp Street in 1999, Yee denied soliciting prostitutes. He told the media: ‘They presume that people are driving around there looking for prostitutes, but there are people who use that street to go home. They said there was somebody they thought looked like me who may have been soliciting. And I said, ‘No, I was coming from work.’”

Sure, that sounds reasonable. I think that some of my readers might think I lay it on a bit thick whenever I refer to the Democrat party at the state and federal level as one wing of a massive, mafia like crime syndicate. Well, maybe this will be the jolly old convincer. The Mercury News outlines the charges against Yee, for which he was required to post a half million dollar bond to avoid spending the night in the slam:

Yee is linked to a host of wrongdoing to pad his political warchest, charged with seven felonies in a case with two dozen defendants accused of everything from money laundering to murder-for-hire. The defendants include Raymond “Shrimp Boy” Chow, a reputed ringleader of a Chinese syndicate federal investigators have been trying to crack since the late 1980s.

But of all this, I’m sure you’ll agree that the most incredible facet of the charges is his alleged role in brokering illegal firearms sales. Here’s a guy that has authored, sponsored or voted for every restrictive piece of anti-gun owner legislation, facilitating (allegedly) the black market trade in the self same weapons! He’s furnishing the criminal element with guns to use against the law abiding owners he’s legislatively put the clamps to. He boasted to undercover FBI agents about his gun smuggling connections in Asia and Russia. Among the charges filed by federal prosecutors was a murder for hire scheme. And had he been successful in his Mayoral campaign, he would have been presiding over the affairs of the city Police Department!

If this doesn’t drive home the point that the Democrats are soaked in corruption and hypocrisy, I don’t know of anything else that would. It’s looking like the Bob ‘Filthy’ Filner fiasco was just the first shoe to drop. State Democratic party leaders are falling all over themselves trying to clear the legislative chambers of the stink of Yee and two other fellow Democrats. Democratic Senator Ron Calderon who faces federal corruption charges, and Democratic Sen. Rod Wright, who is awaiting sentencing in a voter fraud case are suspended until the criminal cases against them have been resolved. Even so, they will continue receiving their $95,291 annual salaries.

What makes me think that if Joe Sixpack got arrested for something that looks like child’s play in comparison, his employer would kick his can to the curb and pay him up to the end of the week and that would be it?

But I guess we’re talking Apples and Oranges here.