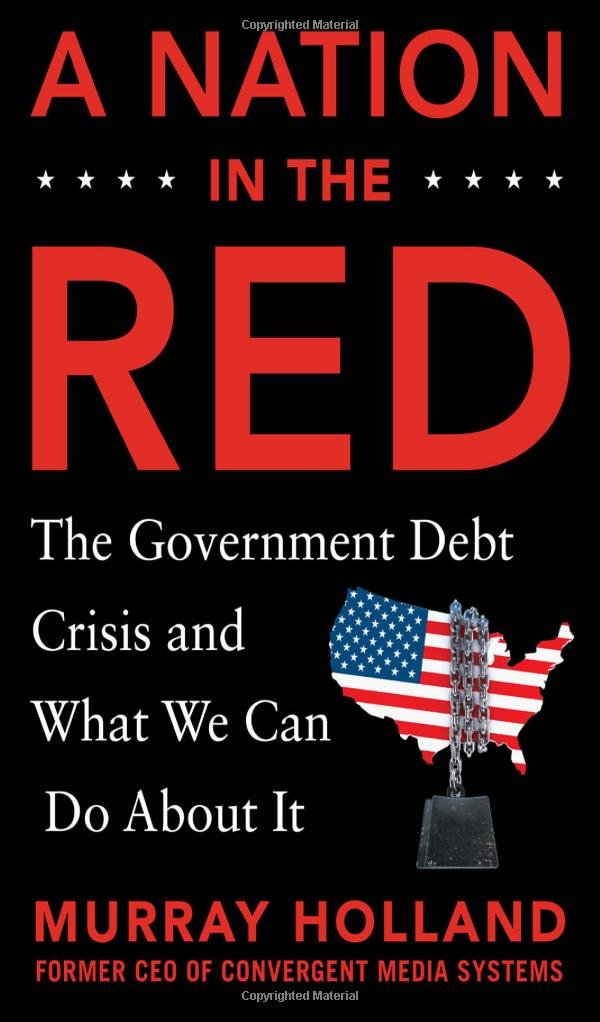 Murray Holland has penned a blunt, informative book entitled: “A Nation In The Red: The Government Debt Crisis and What We Can Do About It.” Holland is a world class writer who has written a book, frankly, I wish I had written. I love this quote: “The laws of economics are like the laws of physics — they can’t be changed by government action.” Oh, how true that is and it is something I have warned on for years. You can’t print money forever and spend as though the well will never run dry, without reaching a tipping point of no return.

You see it all around you right now – the consequences of being in the “red.” Skyrocketing food prices. With gas wars on the horizon in Europe, we will experience gas and oil shortages and rationing once more ala the ’70s. Inflation is here and biting hard. Last week alone, we noticed Hamburger Helper jumped 50% in price. Meat is up 20% this year already and with a pork emergency here in the States, meat is going to become a luxury. Especially with Obama’s EPA and regulations squeezing us. Can food lines and violence be far off? Theft, riots and very hard times are on the way. Hyperinflation and hunger loom thanks to Progressive financial policies that are not just self-destructive and insane — they are suicidal. When a nation has almost $18 trillion in debt, it is a no-brainer. By the time Obama departs, we will be $20 trillion in debt and don’t look for Progressive Republicans to lighten the load much. Their idea of fiscal restraint is cutting the amount of future increases, not the bottom line of debt.

I consider Murray Holland a visionary. Americans are going to have to face hard reality and soon. As Holland’s “Debt Trap” slams shut on the US, you will see financial devastation similar to Greece. Bank account hair cuts and the seizure of retirement funds and savings will be a fact of life. There was a hint of this that occurred last week, where a woman had her tax refund seized by the government to pay the purported debt of a dead relative to Social Security. That was an incident that got scant attention, but it is an event that will become common as the government scrambles for more and more money to keep afloat.

Holland on the rising interest rates:

“The markets will require the United States to cut expenses or raise taxes to balance the budget, but in doing so, the government takes that much money out of GDP and the country falls straight into a deep recession or depression.”

This will necessitate a never-ending recessionary/depressionary cycle, where revenue from rising taxes will decrease. Interest rates will explode. At some point the government will have to slash expenses and social services, cutting off a dependent population. They’ve already gutted the military leaving us vulnerable to our enemies. Catastrophe is only a black swan event away.

People don’t want to think about this. It is too depressing. They’d rather watch cable, play video games and bar-b-cue. But just because we shun responsibility, doesn’t mean it won’t slap us along side the head or across the face with a fiscal trout. Our sugar daddy government is about to dump us on the street.

Holland is correct that we have two sane option: decrease deficit spending and increase economic productivity. Going after energy production here in the States would go a long way to doing just that. With an aging population, it will be even more difficult to turn the USS Titanic around, but there are ways. However, if we recover, it will be long, hard and painful.

I’m one of those crazy preppers and I believe a reckoning is approaching quickly. Holland is a sane voice in a wilderness of Progressive madness. Want the truth of the “Debt Trap” and what is really going on financially here in America? Then Murray Holland’s book is for you. He’ll rock your world. This book is a lifeline and just a great read. You can get a copy of “A Nation In The Red: The Government Debt Crisis and What We Can Do About It” at Amazon.com.

One thought on “A Nation In The Red – A Book Review”