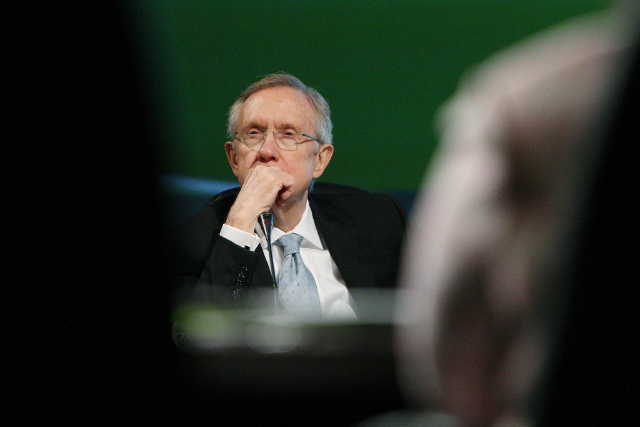 WASHINGTON, April 13, 2014 — One thing Harry Reid does well is live up to his moniker, “Dirty Harry.” On his side of the Democrat wing of the organized crime family in Washington, Reid has few equals as a world class bag man.

It may be pure coincidence that the army of heavily armed agents of the Bureau of Land Management (BLM) are now pulling back from their positions encircling Nevada rancher Cliven Bundy’s family ranch, North of Las Vegas. But it’s doubtful. It may have everything to do with a new round of intense scrutiny of Reid’s use of influence to reward family members and campaign donors in lucrative development deals across the state.

A detailed report of Reid’s efforts to promote a Chinese takeover of 9,000 acres in Clark County for the purposes of building a solar energy farm and manufacturing plant was released by Reuters’ Marcus Stern, a Pulitzer Prize-winning investigative journalist. Stern revealed:

The Langfang, China-based ENN Energy Group hopes to build what would be the largest solar energy complex in America. The site chosen with Rory Reid’s guidance is in tiny Laughlin, Nevada, a gambling town of 7,300 along the Colorado River, 90 miles south of Las Vegas. ENN is headed by Chinese energy tycoon Wang Yusuo, who made a fortune estimated by Forbes at $2.2 billion distributing natural gas in China. Wang escorted Reid and a delegation of nine other U.S. senators on a tour of the company’s clean energy operations in Langfang, and Reid featured Wang as a speaker at his 4th annual National Clean Energy Summit in Las Vegas last year.

Reid has been one of the project’s most prominent advocates, helping recruit the company during a 2011 trip to China and applying his political muscle on behalf of the project in Nevada. His son, a lawyer with a prominent Las Vegas firm that is representing ENN, helped it locate a 9,000-acre (3,600-hectare) desert site that it is buying well below appraised value from Clark County, where Rory Reid formerly chaired the county commission.

How much below appraised value? Enough to cause a few raised eyebrows at the sweetheart deal approved by the Clark County Commission that Reid’s son formerly chaired. While the acreage had an appraised value between $28 and $36 million, the sale price was negotiated down to $4.5 million. Compared to so-called “Russian Negotiation,” Chinese negotiation seems supercharged with the high-octane fuel of the Reid Nevada political machine.

Reid’s use of elected office to enrich himself and his cronies in Nevada is nothing new. In 2006, Reid was investigated by the Senate Ethics Committee concerning his role in a speculative land deal in Las Vegas that netted him $700,000. Reid purchased a tract of land, folded it into an LLC with a friend who purchased an adjacent plot, and then used his clout as senator to persuade the local zoning committee to rezone the property for retail. A $400,000 investment turned into $1.1 million. Reid failed to disclose to the Federal Election Commission that he had transferred the land into Patrick Lane LLC, the partnership he created with business associate Jay Brown.

The accounts of such activity are numerous and persistent. Senator Reid has sponsored as much as $47 million in earmarks that enriched clients of his son Key Reid, who represented them as a professional lobbyist. As reported in the LA Times, Reid’s son-in-law, Steve Barringer cashed in to the tune of $300,000 when the Senator pushed “a provision allowing the company to acquire 998 acres of federal land ripe for development in the exploding Las Vegas metropolitan area.”

The bill also benefited a real-estate development headed by a senior partner in the Nevada law firm that then employed all four of Reid’s sons — Rory, Leif, Josh, and Key — by moving the right-of-way for a federal power transmission line off his property and onto what had been protected federal wilderness.

Reid may be a product of his environment, doing business as it’s often done in Nevada, but he is unusually good at it. This extends to the way in which he accepts money from operators like convicted influence peddler Jack Abramoff. Reid adopts the posture that somehow the $61,000 he got from Abramoff to smooth out legislative pot holes for Indian tribal interests is sanctified by the fact that it went to him, not to a Republican. The “Abramoff matter,” Reid protests, is a “Republican scandal.”

Reid’s play to pay activities go on for pages – you can review them at Key Wiki.

Another bit of business with Reid’s fingerprints all over it bookends his sordid record, illuminating his sense of invincibility and his motive for public office. Reid has taken hundreds of thousands of dollars from the very pharmaceutical industry that he, President Obama, and other Democrats pretended vigorously to oppose prior to the vote on the Affordable Care Act. The pharmaceutical industry funded campaign ads to help Reid withstand Sharron Angle’s 2010 challenge, a campaign in which only a heavy infusion of union money and help from numerous Reid affiliates in the state GOP saved his seat.

Reid accepted the maximum allowed sum of $10,000 from the Pharmaceutical Researchers and Manufacturers of America (PhRMA), along with another $10,000 from drug maker Eli Lilly’s Political Action Committee (PAC). In 2010 alone, Reid took over $154,000 from drug industry PACs.

He was worth every penny. Reid shepherd a bill, called a “reform,” through Congress for PhRMA. The bill was essentially written by the drug lobby. It carved out mandates and subsidies and enshrined 12-year monopolies for related bio-tech firms.

The “risk corridor” provisions of Obamacare that have taxpayers underwriting possible insurance industry losses, were part and parcel of the same process.

According to Natural News:

In addition to PACs, Reid secures drug industry funding via volunteer lobbyist fundraisers known as “bundlers.” One of these bundlers is Paul DiNino, a lobbyist whose firm represents PhRMA, GlaxoSmithKline, Merck, Novartis, Pfizer and Sanofi-Aventis. Another is Tony Podesta, who represents Amgen and Genzyme. A third is William Singer, who represents Pfizer. DiNino raised $23,950 for Reid in the last year, Singer raised $39,705 and Podesta has raised $78,400. A PAC for lobbying firm DLA Piper has raised at least $26,500 for his campaign.

Reid’s critics might have good reason if they smell in the heavy-handed use of BLM agents as button men in the Bundy Ranch debacle, the stench of Harry Reid lining up other more lucrative uses for the land around the ranch than a Desert Tortoise preserve.

Be cautious in telling Harry Reid to “help yourself” — unless you need a job done in Nevada or Washington.