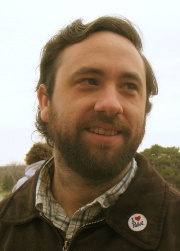 Glenn Burleigh is a Campaign Management Consultant, from St. Louis and a former leader of the Missouri Communist Party USA.

I have experience in labor, community, and political organizing. My specialty is political, and I can run initiative petition drives, decline-to-sign drives, and provide full service candidate campaign management. I provide aggressive and comprehensive field management to campaigns, large and small.

He is the former Head Organizer of St. Louis ACORN, where he oversaw the community and political organizing efforts.

Burleigh was contracted out to run the statewide field campaign for WECAN, the coalition that stopped Ward Connerley’s anti-affirmative action initiative.

He was also contracted out to supervise the three eastern Missouri US Congressional Districts signature gathering efforts for Missourians for Quality Homecare. He also trained supervisors for other districts.

In this race we overcame a massive spending disadvantage, and were able to pull off a major grassroots, progressive upset.

According to the Communist Party USA paper Peoples Weekly World:

McCaskill is challenging conventional wisdom though, spending more time in rural areas than ever before. While working the traditional Democratic base, her connection with rural voters is forcing Talent to spend time and money on what was once thought of as solid Republican turf.

According to Pro-Vote organizer, Communist Party USA Glenn Burleigh, “These are tough races in areas where choice, LGBT rights and guns can make or break a campaign. We are working to turn the tide against the right wing, but a lot more work needs to be done.”

In 2005, Glenn Burleigh was Chair of the Missouri/Kansas Communist Party Education/Ideology Committee and an organizer with the Communication Workers union.

In 2007, members of the Communist Party’s Missouri/Kansas District Executive Board were: