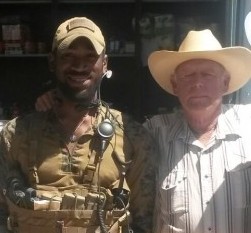 The Left adores its “racism” narrative. It is practically the only narrative they have left, and they have used it repeatedly like a cheap prostitute at a party for sex addicts. One of the cheapest political whores on the national scene is Dirty Harry “Cleanface” Reid, the ignoble, utterly corrupt U.S. Senate Majority “Leader.” Harry has now added his wormy voice to the cacaphony of leftist sluts calling Cliven Bundy “racist.” Let’s get our facts straight.

The Left is able to promote this narrative for two main reasons: 1. they lie. 2. the media repeats the lie. So let’s dissect their lie about Bundy. How did they lie? As usual, they edited remarks to create the perception they want, using only that portion of Bundy’s remarks where he intimated that blacks were better off under slavery. They carefully left out the portion that put the statement in context.

Let’s also acknowledge something the Left never will in their vicious campaign to slander people who have the audacity to threaten their franchise. The Left cares little about the target individual, or the inconvenient facts that may humanize him somewhat. You can’t cultivate sympathy for one you want to destroy. Cliven Bundy is not a wealthy man. He is not an educated man. He has not had decades in the practiced art of prevarication that is the Left’s stock in trade – in fact one of the only things the Left does well. He is a simple man who simply expresses his opinion, without careful word crafting, without considering that there is an entire industry out there with nothing better to do than put his words under a microscope so they can misrepresent them for their own unscrupulous purposes.

In fact, Bundy was trying to say what many have said for decades, i.e. that the Left has created a nightmare for the black community, and that many blacks are much worse off today than they were before the great liberal welfare experiment of the 1960s. The welfare state is primarily responsible for destroying the nuclear black family, and endemic crime, drug addiction and unemployment are the direct result. Prior to President Lyndon Johnson’s “Great Society” welfare expansion, the unemployment rate for young blacks was lower than that for whites. Out of wedlock pregancies were a fraction of what they are now, and crime and drug addiction, while problematic in inner cities, were nowhere near today’s levels.

Democratic politicians justify the burgeoning welfare state as reflecting compassion for the “poor and oppressed,” but the fact is that the Left created the welfare state deliberately and specifically to capture the minority vote forever. The infamous socialist authors of the “Crisis Strategy,” Richard Cloward and Frances Fox Piven, had much to do with this, and they admitted as much, saying, “If organizers can deliver millions of dollars in cash benefits to the ghetto masses, it seems reasonable to expect that the masses will deliver their loyalties to their benefactors.” It worked. In 1960, only 58 percent of black voters were Democrats. By 1968, 92 percent were Democrats and only three percent were Republicans.

In 1961, Cloward co-founded an experimental welfare program called “Mobilization for Youth.” Presidents Kennedy and Johnson used his model to envision a massive federal infrastructure that would both fund leftwing activism and buy off minorities. What followed was President Johnson’s “War on Poverty,” and the Office of Economic Opportunity created to implement it. OEO financed “10,000 organizations employing several hundred thousand people” to radically transform U.S. policy outside the political process, according to conservative activist Howard Phillips, who ran OEO in 1973. He identified Cloward and Piven as OEO’s “ideological architects.”

If you have not read Cloward and Piven’s treatise on the Crisis strategy, you should do so now. Once Johnson established the welfare state, Cloward and Piven pointed out that government could never meet promises it had made if everyone who qualified for welfare demanded it. They stated that minorities could precipitate systemic crisis and collapse, creating the pretext for a “guaranteed annual income,” i.e. socialism. This was Cloward and Piven’s real goal all along, and they helped found the National Welfare Rights Organization and ACORN to execute it. The rest, as they say, is history, and today’s epidemic of welfare fraud, waste, crime, overspending and decaying inner cities can be laid directly at the Left’s feet. So Bundy’s remarks were not far off.

Bundy is not a polished pundit. His statement about slavery was clumsy, but that’s it. He qualified it by saying that “we’ve progressed quite a bit from that day until now, and we sure don’t want to go back,” and further qualified it by describing his compassion for the blacks who are victims, not perpetrators. Under welfare, he said, they have no purpose, and “that’s all government, it’s not freedom.” Of illegal immigrants he said “They’re here, and they’re people, and I’ve worked side-by-side with a lot of them. Don’t tell me they don’t work and don’t tell me they don’t pay taxes. And don’t tell me they don’t have better family structures than most of us white people.” Sadly, that is a true statement.

Bundy is no racist. Here are the words of a black man who knows him personally. The photo he refers to is posted above:

The media distorts information to the point of social division. This is a photo of myself and the resilient, often charismatic, and maybe not so tactful Cliven Bundy. He’s a cowboy and a helluva family man, not an orator. One thing he definitely isn’t – a racist. I found his comments to not only be NOT racist, but his own view of his experiences. Who the heck are we to determine another man’s perspective on the world around him?! Just because Picasso’s view of the world was abstract, does it negate the fact that his art was genuine? Furthermore, if you take the time to do your own research, you’ll find that his statements about some black Americans actually hold weight. He posed a hypothetical question. He said, “I wonder IF” … Hell, I’m black and I often wonder about the same about the decline of the black family. Bottom line is that we are all slaves in this waning republic, no matter our skin color.

Sorry, lefties, Bundy’s are not the words of a racist. They are the words of a simple, honest man speaking his mind. That he can’t use 50 cent words may be an advantage for the Left, but as usual, it is only because the Left is willing to stoop so low in its never-ending rhetorical war with America. The liberal plantation is a slave state that the worst slave-owners couldn’t have imagined, because they at least wanted their slaves to work. All the Left wants is votes, and the only way to guarantee that is to keep minorities, and increasingly the rest of us, in perpetual poverty.

The corrupt hypocrite, “Cleanface” Dirty Harry Reid, and many fellow leftists, stand to gain personally from the solar power developments planned for that part of Nevada. BLM land surrounding the Bundy ranch is to be used as a sanctuary to mitigate the ill effects of the environment-killing solar farms. Reid’s ulterior motives are shamefully obvious.

One thought on “Cliven Bundy racist? Not”