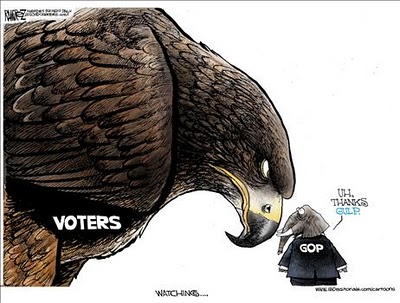 So, the elites in the Republican Party figure that they don’t need the approval of conservative voters anymore apparently. Rep. Cathy McMorris Rodgers (D-WA) came out and flatly stated what we all knew was coming if the Progressive Republicans got their way: Obamacare is here to stay and Amnesty will be a done deal by August. In case you don’t know who Rodgers is, she’s the House GOP Conference Chair. You people really, really want to go the way of the Whigs, don’t ya?

It would seem the usual suspect RINOs have been laying out plans to push Amnesty through. And they are playing word games, stating that this has everything to do with legal status and not Amnesty. Nuance. Not to be outdone on the DREAM Act, Rep. Joe Barton (R-TX) proudly proclaims: “[we] will soon introduce a bill that will establish a path to citizenship for the minor children of illegal immigrants and a guest worker program.” Cheap labor and a permanent slave class for all crony capitalists! I’m sure it will be packaged with a red, white and blue ribbon when it is delivered to the US Chamber of Commerce. Rep. Mario Diaz-Balart (R-FL) said the Republican leadership is “as close as we have ever been” and, though “it is still a big, big, heavy lift… I think we’re going to get there.” You’ll try, but when you get there son, you won’t have a Party left to celebrate with.

All of these people, including Paul Ryan, keep saying that conservatives support this — that the American people are behind them on it. Either they are delusional or they think if they say it long enough, it will magically come to pass. Boehner has declared he is hellbent on passing Amnesty and has derided any conservative who stood in the way. With big business lining his pockets as well as his cohorts, Boehner has too much invested to not ensure the Republican Party toes the Progressive line.

Passing Amnesty will put Arizona and Texas into play for the Democrats and will all but ensure a Marxist voting bloc for the foreseeable future. With New York, California and Texas, the Progressives will have a stranglehold on the nation. I have warned many times on this blog that the likes of John McCain and Lindsey Graham would push Amnesty into being after the GOP primaries this year.

Sens. Jeff Sessions (R-AL) and Ted Cruz (R-TX) blasted the GOP leadership’s “immigration principles,” as Amnesty and rightly so. They and a very few others are calling the Republicans out for it and standing against it. The only ones I see fighting are Tea Party candidates. Read here on the five major problems with the GOP’s immigration policies. To summarize, they are:

We’re done waiting and we are out of time. The conservatives within the Republican leadership must act now. As Judson puts it, they have a choice to make, “revolt or die.” The Tea Party is what brought the Republican Party back to life after Progressive weanies within its ranks brought it to the brink of extinction with prolific spending, taxing and regulation. We saved the Party and as thanks, we have been pilloried, vilified and constantly attacked by enemies within and without — all Progressive and or Marxist in nature.

In 2010, when we routed the Left, all that the Tea Party asked for was smaller government, less spending and a reduction in regulations that were suffocating business growth. We asked that Obamacare be stopped and turned back. Defunded if not outright repealed. Instead, Republicans doubled down and while saying they are against it, have done all they can to see it is entrenched forever in our way of life. Now Amnesty cometh and it will be the final nail in the coffin of a free America. No amount of wealth or power these people have been promised is worth that. It is suicidally short-sighted.

You have surrendered on the debt. You have allowed a whole raft of Marxist Executive Orders to be put in place. Our police have become militarized. The Constitution is shredded. We have never recovered fiscally. Our military prowess and standing globally has been made into a bad and dangerous joke. And instead of righting the conservative ship with some semblance of sanity, you keep running the same Progressive losers over and over for office. Sometimes winning, mostly not. Now you want to run Jeb Bush and Mitt Romney again. Americans don’t trust you or the Democrats. In reality, there is only one Party anymore — the Progressive Party. It is two sides of the same Marxist coin. You say tomato, we say Communist.

Again, it is time for the leadership of the Republican Party to make a choice: “revolt or die.” Either clean house and get rid of the likes of Boehner, Cantor, McMorris Rodgers and McConnell, or go the way of the Whigs and end the Republican Party. You don’t have until 2016… the make or break point is here and now this year and if you insist on pushing these suicidal policies, the Tea Party will split from the Republicans. I guarantee it.

If you are going to ram home Progressive policies such as Obamacare, Amnesty, printing more and more money, out of control spending, higher taxation and stifling regulations, then why the hell should we bother with you? Because if we don’t vote for you the Dems will win? What’s the difference?

There are true conservatives in America. I contend there are a whole lot of them. If you pass Amnesty, be prepared to watch them walk right out your door and tell you to pound sand and I’ll be there with them.

The choice is yours. Either live up to the conservative values that you claim you support or watch conservative voters leave the GOP for a new party.

Indeed, choose as though your Party’s life depended on it, because it does. America is officially on Republican Party Suicide Watch. The Tea Party will take a conservative stand — you can change and welcome us into the fold and embrace Constitutional principles, or you can choose political extinction. Revolt or die.