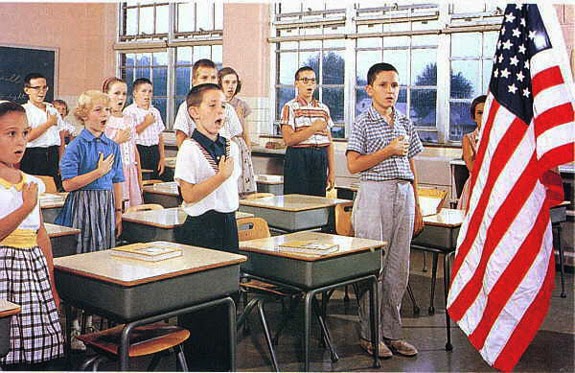 The Pledge of Allegiance was written in 1892 by a fellow named Francis Bellamy, a Baptist minister and it was formally adopted by Congress as the pledge in 1942. Bellamy felt strongly that it should be used in the public school system and used Columbus Day to kick start its use as it coincided with the opening of the World’s Columbian Exposition in Chicago.

“In Francis Bellamy’s recollection of the creation of the Pledge, he recalled “At the beginning of the nineties patriotism and national feeling was at a low ebb. The patriotic ardor of the Civil War was an old story … The time was ripe for a reawakening of simple Americanism and the leaders in the new movement rightly felt that patriotic education should begin in the public schools.”

“I pledge allegiance to my Flag and the Republic for which it stands, one nation indivisible, with liberty and justice for all.”

Louis A. Bowman, an attorney from Illinois, was the first to initiate the addition of “under God” to the Pledge and according to historical records:

“President Eisenhower sitting in Lincoln’s pew, the church’s pastor, George MacPherson Docherty, delivered a sermon based on the Gettysburg Address titled “A New Birth of Freedom.” He argued that the nation’s might lay not in arms but its spirit and higher purpose. He noted that the Pledge’s sentiments could be those of any nation, that “there was something missing in the pledge, and that which was missing was the characteristic and definitive factor in the American way of life.” He cited Lincoln’s words “under God” as defining words that set the United States apart from other nations.”

President Eisenhower later in 1954 had “Under God” added to the Pledge of allegiance to bring America back to God. This desire to remind citizens of our nation’s reliance on the Lord has become something of a sticking point in these latter days.

Francis Bellamy is also listed as a Socialist, a Christian Socialist to be more specific. Matthew 25:31-46 is a major component of Christianity and is considered the cornerstone of Christian socialism.

I’ll trim that scriptural reference down to a bite sized chunk which most of us are familiar with:

Somehow these passages from the mouth of Jesus intended to enlighten individuals, to impress upon everyone the need to implement the Golden Rule, provide for the sick, the afflicted, the penniless, the imprisoned; somehow Christian Socialists have read into the Bible that instead of individual benevolence, government can force individuals to take care of the sick, the afflicted, the penniless, the imprisoned. Instead of calling it benevolence it’s called Social Justice, the redistribution of wealth from those who unfairly obtained that wealth to those who otherwise would have had an equal opportunity to be modestly successful were it not for this, that or the other. Talk about opening up a can of worms; after looking up and finding Christian Socialism, it links with the Fabian society “which favoured gradual change rather than revolutionary change” and the term “social justice”.

“Classically, “justice” (especially corrective justice or distributive justice) referred to ensuring that individuals both fulfilled their societal roles, and received what was due from society.”

An important thread to all of these ‘feel good’ socialistic romps is the use of force, mild in some cases; but force all the same. How else to ensure that individuals fulfill their societal roles and receive what is due from society? Force of government by exacting that which under other conditions would not be given.

Clearly showing benevolence to those in need is not the same as having a representative of the government exact donations for those less fortunate and it certainly isn’t anything preached by our Lord, Jesus Christ regardless of the cherry picking of scripture proposed by Christian Socialists.

With this simple thought process as found in Ezra Taft Benson’s talk, The Proper Role of Government, we are forced, pardon the use of the word, forced to recognize a foundational principle of sound governance and yet so called Christian Socialists would have us believe that good intentions trumps the rule of law. It only works if you ignore the truth, something which our nation has been doing far too long.

And so we see that the Father of Lies, Satan, doesn’t call Black White or White Black; instead he paints portions of truth as if it were all true and entices good men down the path leading them to destruction through deception staged as if it were the truth.

You’re either a Christian following the teachings of Christ or you’re a socialist, content to enslave your fellow citizens by having government obtain social justice by force, to include theft of earned income and property all the way to loss of freedom and imprisonment for resistance and even death should the resistance merit such force. There is no such thing as a Christian Socialist; that’s an oxymoron.

You claim to be a practicing Christian Socialist…what other lies are you telling yourself in order to hide from the truth?