Correctional facility residents, with their leader dogs, at a graduation ceremony
Non-profit enables UP inmates to help the blind 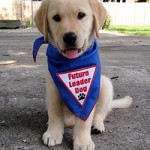 What could ever connect a blind person, in need of independence, and a prisoner, in need of a meaningful connection to the outside world? Answer: A special canine – a Leader Dog.

Here’s a video that explains the unique non-profit program that does not receive government funds. 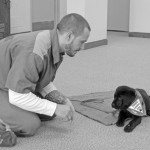 Prison inmates from the Baraga and Chippewa Correctional Facilities in Michigan’s Upper Peninsula are helping to train “Leader Dogs for the Blind.”

“ … it’s a win-win formula for everyone, with carefully chosen inmates able to volunteer the huge amount of time needed to train the dogs properly, and the dogs giving the prisoners a sense of accomplishment, responsibility and empathy,” says Michael Curley, a corrections officer.

Some of the positive comments from the trainers include: “I’ve been locked up most of my adult life, and in 14 years since that started, this is probably the best thing that’s happened to me.”

And, “I’ve lived a selfish life mostly with drugs, but this is doing something for someone else.” Also, “I think we get more out of the dogs than the dogs get out of us.”

Hats off to the Leader Dogs for the Blind (headquartered in Rochester Hills, Michigan), the Lions Club, and the volunteers that support their programs, as well as the Michigan Department of Corrections.

Hats off the young dogs (mostly Labradors, golden retrievers, and German shepherds) that are smart enough to lead the blind and loving enough to remind humans how to be caring humans!