***Seriously, what he said! If you aren’t buying Larry’s books and reading his blog, why the hell not? The guy is epic!!

I did a lot of research on human trafficking and modern slavery before Mike Kupari and I wrote Swords of Exodus. It is a horrible, evil, and surprisingly gigantic thing. One thing I’m fairly sure of about the kind of people who do that sort of thing for a living, is that they really don’t give a shit about a bunch of American movie stars taking pouty selfies of themselves holding up signs with hash tag give our girls back. The disapproval of fat, soft, Americans on Facebook really doesn’t move them. They care about getting paid or getting killed, that’s about it. The self-righteous pouting is useless. 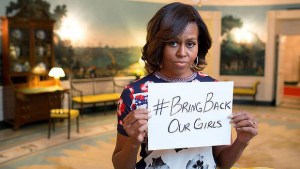 Don’t tell me about it, go tell your husband. He’s the one with the red phone.

For the idiot libprog pussies with the selfies, the world is a violent place, filled with violent men. If you actually want something to be done about these evil people, maybe you shouldn’t bitch, whine, and moan every time our military takes action against evil people. It seems odd to me that the same people demanding military action for this are the same ones that complain about military action for anything else. Oh, but wait, I forgot, the left has no overriding principles, and to them violence is always bad unless their guy does it, and evil is relative depending on how it trends on Twitter.

This kidnapping event made the news, but this sort of thing happens every day somewhere in the world. You’re shocked and outraged about this, but that just shows how little you know about the subject. There are plenty of outrageous acts of evil out there to choose from. You can take useless photos of yourself holding up a sign, but it will do nothing other than prove to your fellow idiots that you care so hard.

You want to actually do something? You can demand that America truly be World Cop and swoop in to kill all the bad people every time they do something bad somewhere… Only if you really want that, then you probably shouldn’t bitch continually about the American military doing violent things to violent people. The problem is in reality we couldn’t afford to kill every bad person, we couldn’t pull it off anyway, and it isn’t really our problem. 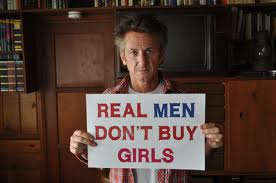 But if your selective outrage is really up in arms about this one, movie stars with the hash tag, I’ve got a simple solution for you. Take some of your millions of dollars and hire some mercenaries to go into Africa to shoot all the members of Boko Haram. I wonder how that would trend on Twitter. #gurkhaskillscumbags

But the left hates the private sector, so hiring Blackwater (or whatever they are named this week) to gleefully give slavers some stylish new 5.56 body piercings is out of the question. So we’re back to being useless or taking military action. And if we drop Navy SEALs on these assholes, you guys really need to think through how come it is okay for our guys to kill these woman abusing assholes, but not other woman abusing assholes. Those assholes, left wingers invite to speak at Ivy League colleges.

The real solution? Nigeria is one of dozens of screwed up countries. If Nigeria wants to be truly safe from slavers and madmen, it is going to require the Nigerians defend themselves from assholes, and if the Nigerian government won’t do it, then the Nigerian government needs to be replaced by Nigerians who want something better. For the thousands of other evil events that don’t trend on Twitter, replace Nigeria with whatever lawless hellhole country is in question and you get the same answer. People get freedom when they demand it for themselves. 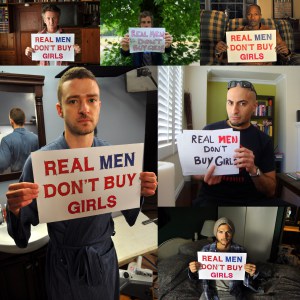 Real Men provide their wives and daughters with guns so they can shoot kidnappers in the face. Real Countries have laws and exterminate slavers like vermin.

On the Real Men Don’t Buy Girls campaign… Holy shit… Seriously? That is so blindingly obvious that it takes a campaign on Twitter? “OMG! I was totally buying some child brides for my harem and then I saw that Ashton Kutcher said slavery was bad! LOL. I would have been soooo embarrassed!” said no Saudi prince ever.

Sometimes I wish that Exodus was a real organization—a bunch of warriors dedicated to brutally killing slavers and evil warlords in the places where law has broken down and chaos rules—only in real life I bet the morons holding up the signs on Twitter would complain about what horrible violent cismale gendernormative colonialists they were. They’d probably come up with a catchy hash tag or something.