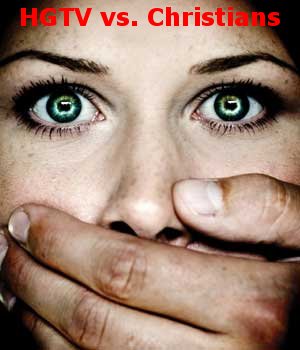 I am bitterly disappointed in HGTV. They are arguably one of my very favorite channels. That they would bow to censorship, especially of Christians, boggles my mind.

Twin brothers, Jason and David Benham, were preparing to launch a show on HGTV this fall entitled: “Flip It Forward.” In the show, the brothers would be helping families in need to renovate their homes. But when their staunch Christian beliefs were brought into the limelight by Right Wing Watch, a hateful organization that targets conservatives, HGTV cancelled the show before it ever had a chance to air. Their crime? A strong stance against homosexuality, abortion and radical Islam. 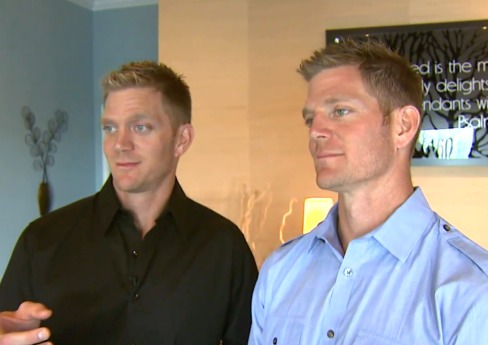 Let’s turn this around for just a minute and play ‘wag the blog.’ If a Muslim says hateful things about Christians — anywhere in media — are they targeted? Nope, they are applauded and sometimes given their own network and/or show. If the homosexual movement comes out against Christians and makes inflammatory comments concerning their faith, are they held accountable? Nope — they are hailed as courageous, forward thinking, proactive against haters. See a trend here?

Why does the First Amendment apply to those on the Left, but not the Right? What’s next? Segregation for Christians? Separate housing… schooling… fountains… restrooms? Where does this end? It doesn’t, except with persecution, imprisonment and death. Evidently Christians are the equivalent of… take your pick of any persecuted section of society: slaves, blacks, Jews… and must be silenced. Shhh! Don’t speak or live your faith! By the narrowest of margins – 5 to 4 – the Supreme Court upheld praying in public this week. But think about this – it involves ‘Christian’ praying, not Muslim, Hindu, Satanic, etc. The silencing of Christian voices in America is in full swing and it will get much worse, I fear.

Right Wing Watch and People for the American Way are funded heavily by George Soros. They are constantly trolling for someone on the Right to attack and smear. This time, they smeared the twins because their father is a pastor. One who believes homosexuality and abortion are sins, and that radical Islam is evil. Right Wing Watch/People For the American Way and the Left don’t believe he has a right to publicly voice his opinions and that the perceived sins of the righteous father are the sins of the sons. Both boys have come out and stated they love everyone – they love gays and Muslims – they just don’t condone their lifestyles or beliefs. For that heinous stance, they are to be discredited and punished in the way that Phil Robertson of Duck Dynasty was. Being a vocal Christian in America is beginning to be a very dangerous thing and they are to be hunted and summarily judged guilty of hate. These organizations that are going after the twins are all parroting each other with identical, scripted rhetoric. If you ask me, the hate shoe is on the other foot.

“At least one of the Benhams is not just a real estate dealer but also a dedicated right-wing activist in the mold of his father, Flip Benham, who has headed the abortion-clinic protest group Operation Save America ever since it split from the militant anti-choice group Operation Rescue.”

So, Soros, the Left and Right Wing Watch/People for the American Way have made themselves the judge and jury of someone who opposes killing children in the womb. It’s a federal crime to kill a baby tortoise, but killing a human baby? Tres chic! Margaret Sanger would be soooo proud.

One of the twins, David, organized a 2012 Christian prayer rally called Charlotte 7:14 in 2012 — one that he spoke about in-depth with Christian radio host Janet Mefferd:

“We don’t realize that, okay, if 87 percent of Americans are Christians and yet we have abortion on demand, we have no-fault divorce, we have pornography and perversion, we have a homosexuality and its agenda that is attacking the nation, we have adultery,” David Benham said in the radio interview after the prayer event. “We even have allowed demonic ideologies to take our universities and our public school systems while the church sits silent and just builds big churches.”

Benham went on to say that the Charlotte 7:14 event was an opportunity to admit that there is hypocrisy in Christian churches and for believers to ask for God’s forgiveness for “allowing these things in the house of God.”

The family has also been criticized for its staunch opposition to the Ground Zero mosque and for claims made about the Islamic faith.

Benham is right and he has the courage and fortitude to live and speak his faith. The Left hates him for it. They hate what is moral and right in the eyes of Christianity. Our churches are in grave danger and we have turned from God. We need more like him speaking out, not less. And our Constitution is supposed to guarantee him that right. No one should lose their livelihood because of their faith.

HGTV has the right to hire and fire who they want. It is their network. The Benhams have said if their belief in Jesus Christ cost them a show, then so be it. I only wish there were millions more like them — those who were strong enough in their faith and their beliefs to stand no matter what. They follow in the footsteps of our Founding Fathers.

I would have enjoyed the show and I am sure millions of others would have too. It’s HGTV’s loss:

The father and the sons, as well as their family are following their faith. To support them, visit #FlipThisDecision and sign the petition:

The brothers have released a statement:

The first and last thought on our minds as we begin and end each day is; have we shined Christ’s light today? Our faith is the fundamental calling in our lives, and the centerpiece of who we are. As Christians we are called to love our fellow man. Anyone who suggests that we hate homosexuals or people of other faiths is either misinformed or lying.

Over the last decade, we’ve sold thousands of homes with the guiding principle of producing value and breathing life into each family that has crossed our path, and we do not, nor will we ever discriminate against people who do not share our views.

We were saddened to hear HGTV’s decision. With all of the grotesque things that can be seen and heard on television today you would think there would be room for two twin brothers who are faithful to our families, committed to biblical principles, and dedicated professionals. If our faith costs us a television show then so be it.

HGTV has no comment. Duck and cover, right guys? I am sure they are fully aware the twins were the victim of a highly organized and connected smear campaign:

He continued: “We were told by someone close to us, in a high place, ‘You and your brother at this point have an image problem’ — and we need to rebuild our image,” David Benham told Deadline. “A smear campaign was run, and Jason and I are not going to try and correct a smear campaign.” He said he and his brother will “be a voice for truth and help those people that are intimidated by these folks, if that rebrands our image, so be it – but that’s not our goal.”

Appeasement is the norm these days. Appease the homosexual movement, radical Islamists, terrorists — anyone and everyone, but Christians. Because we can’t have morality and goodness stand in America, evidently. But we can sure reenact Satanic rituals at Harvard and work at getting a statue of Baphomet a position in the Capitol of Oklahoma.

In the end this is a Constitutional issue. Christians are being denied their rights across the board — in the public square, media, politics, schools and even their own churches. Freedom should be for all in this country, not just the currently politically correct.

So, I ask HGTV… since you allow homosexuals in many of your episodes, why are you banning Christians? Do you have any regard for the First Amendment? Or is it more politically expedient to silence American Christians?

27 thoughts on “The Silencing of American Christians”