It is bad enough when the Dept. of Homeland Security labels returning veterans as potential domestic terrorists, it is unconscionable when those same veterans have to die waiting for treatment for up to a year at a Veterans Administration Hospital. So why must we think there is some sinister plot to thin out the ranks of our honored veterans? The clue may be that the same person is in charge and he has been promoting “end of life” programs for over 5 years.. The same VA Secretary, Eric Shinseki, who is being ordered by Congress today to investigate the current secret wait list scandal that surfaced at a VA Hospital in Phoenix, Arizona last week was the same person behind the mandatory distribution of the Veterans Administration -sanctioned “end of life” counseling program 5 years ago. That program used a handbook called “Your Life, Your Choices” written by a group formally known as the Hemlock Society.

Just to recap the story, here is a quote from the Daily Beast.

A single, secret wait list contributed to the deaths of dozens of veterans in a single VA hospital. Insiders say there could be many, many more such lists.

Outrage has been building since claims emerged last week that at least 40 veterans died while waiting for treatment from a Phoenix VA hospital. A whistleblower who had worked at the Phoenix VA alleged that the facility placed veterans on a secret waiting list to hide the fact that they had even sought care. But in the furor over the latest revelations, an even larger and more serious problem may be getting lost. It’s likely that there are more secret wait lists concealing patient delays throughout the VA medical system, putting untold numbers of veterans in jeopardy.

President Jim Towey of Saint Vincent’s College, founder of the non-profit “Aging With Dignity” and former White House Director of faith based initiatives, wrote a blistering expose entitled “The Death Book For Veterans,” revealing President Obama’s new Veterans Administration (VA) directive, presumably signed by VA Secretary, General (ret.) Eric Shinseki, which mandates all veterans’ primary care physicians must graphically discuss “end of life planning” with all VA patients (not merely those nearing death), and must refer them to “Your Life, Your Choices,” a book that openly encourages Euthanasia and was written with guidance from the group formerly known as the Hemlock Society. That same pro-suicide group now boasts on their web-site of directly leading the charge to ensure “end of life counseling” is mandated in the Obamacare bill, HR 3200.

On page 21 of the Shinseki-mandated Veteran’s Euthanasia book, all military veterans are encouraged to complete a checklist of various scenarios, to decide whether their own life would be “not worth living.” For example, the booklet asks veterans 7 questions pressuring veterans to sign a “living will” that authorizes doctors to terminate your life, if you are:

Living in a nursing home?

Being in a wheelchair?

Not able to “shake the blues?”

Ever heard anyone say, “If I’m a vegetable, pull the plug?”

No longer able to contribute to your family’s well-being?

Are you a severe financial burden to your family?

Do you cause severe emotional burden for your family?

“This hurry-up-and-die message is clear and unconscionable,” says Towey, “Worse, a July 2009 VA directive [presumably signed by Shinseki] instructs its primary care physicians to raise advance care planning with all VA patients and to refer them to ‘Your Life, Your Choices.’ [the Euthanasia booklet.] Not just those of advanced age and debilitated condition-all patients. America’s 24 million veterans deserve better.” Towey recommends a “five wishes” living-will document that does not pressure suicide.

But instead the Hemlock Society booklet is now MANDATED for doctor referral to all patients in all VA hospitals, heaping more evidence upon the growing list of proofs that the Obama Administration is LYING TO THE PUBLIC by denying their health care plan pushes Euthanasia on the elderly. They already do it today. Just imagine if ALL hospitals become government-run like the VA.

We all gasped when the federal government seized control of General Motors, and Obama effectively fired the Chairman and replaced the board with government bureaucrats selected by Treasury Secretary Geithner. Now Obama and his liberal Democratic House allies want to replace your doctors with bureaucrats, hasten grandma’s demise, abort and kill children in urban neighborhoods, cut doctors’ pay and control their religion, and transform Private hospitals into government-controlled atheist bureaucracies.

Does any of this remind you of Communism? Do not stand idly by and allow this. Write Congress to say, “no to Obamacare.” Will you? Then please forward this message to all your friends who care about our beloved country, especially those senior citizens who may be at greatest risk.

Please, take action right away to STOP this bill dead in its tracks!

Reference links to this story:

“Your Life, Your Choices” can be downloaded from Life Issues.org here. Life Issues is NOT the organization promoting the “end of life” program, they are helping to disclose it. 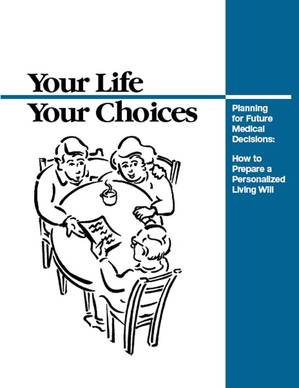 The Obama Administration is telling veterans they are a burden to society. A re-birthed document, “Your Life, Your Choices” is given to all Veteran’s Affairs (VA) patients, and is authored by a euthanasia advocate. Our 24 million veterans deserve better.
(Life Issues Institute, Facebook update from 8-24-09)
For a more detailed article, click here.
Read the pdf of “Your Life, Your Choices”