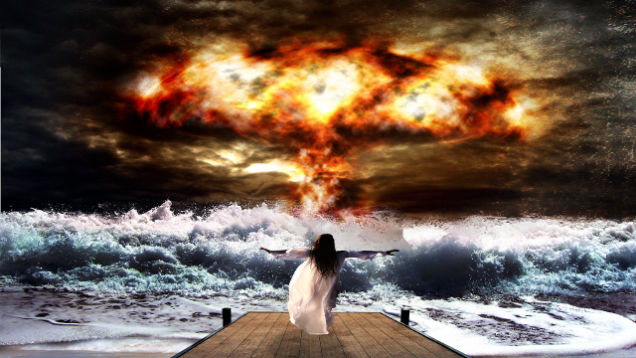 In a nuclear tit for tat, U.S. Strategic Command, which is in charge of waging nuclear war, will hold large-scale bomber exercises this week. This follows on the heels of Russia conducting “massive” war games simulating a U.S. and NATO nuclear attack a few days ago. Both sides are denying this has anything to do with war — that the drills were coincidentally scheduled late last year. Are you kidding me? Wow… the lies just get more and more brazen and deadly. It is looking more and more as if the Russkies want a piece of the U.S. The Ukraine is pretext.

On the Russian side, the test launch of a SS-25 Topol intercontinental missile and two SS-N-23 submarine-launched ballistic missiles was conducted. Additional missile firings included six Russian air-launched nuclear-capable cruise missiles. Putin had a front row seat with popcorn for the event. Which, by the way, was held on the anniversary celebrations marking their victory in WWII. Get it? The jokes on the world. Gimme, gimme, gimme war. Former Pentagon official Mark Schneider said the exercises are unusual and appear aimed at the West. Ya think? I suppose when the nukes rain down, you’ll call for partly cloudy radiation as well. Suicidally clueless:

“This type of exercise is normally held in the fall not the spring. Holding it now suggests to me that the intent was nuclear intimidation against NATO over the Ukraine,” he said.

The latest nuclear saber-rattling by Moscow followed the April 14 test launch of a new ICBM, the SS-27 with multiple simulated warheads that potentially violated the 2010 New START arms treaty.

The war games also followed the Obama administration’s recent rejection of a Russian proposal aimed at resolving U.S. and Russian differences over missile defenses. Moscow wanted an agreement with legal restrictions on European-based defenses and the administration rejected the plan and cut off further talks because of the Crimea annexation.

State-controlled Russian news outlets described the drills as a “massive launch-on-warning missile strike and countering a nuclear attack by the means of the Moscow missile defense system.”

A Russian Tu-95 strategic nuclear bomber conducted a salvo firing of six air-launched cruise missiles as part of the drills. And the Russians also carried out a test of missile defense interceptor against an incoming target. Short-range Iskander missiles and multiple-rocket launcher systems also took part.

The exercise involved what is called “launch-on-warning,” the firing of missiles in response to radar indications of an incoming strategic missile attack.

Ground troops and air forces also took part in the exercises timed to a summit meeting of the Commonwealth of Independent States, former Soviet republics that are the target of Putin’s effort to reestablish a Soviet-like federation dominated by Moscow.

Sounds like old-home terrorist week to me, just hypnotized by the coming show. Make no mistake, this was Putin showing how he would counter a nuclear strike by the U.S. Or more to the point, counter a retaliatory strike:

“At the Priozersk training area (Kazakhstan), a successful interception of a ballistic target by a short-range countermissile was carried out. A massive rocket nuclear strike was repelled by a ballistic missile defense unit of air and missile defense troops,” a Russian official told the news agency.

“The anti-missile system successfully struck the target that imitated a ballistic rocket.”

The SS-25 was launched from the Plesetsk test site about 500 miles north of Moscow to the Kura test site in Kamchatka some 3,500 miles away.

The SS-N-23 was fired from a Delta IV missile submarine from the Barents Sea to Kamchatka.

A second submarine, also a Delta III, fired a second SSN-N-23 from the Sea of Okhotsk near the Pacific to the Chizha test site at the Kanin Peninsula, some 3,300 miles away.

It was Russia’s first submarine missile test launch from the Pacific in more than a decade, highlighting Russia’s shift in focus to the Pacific region.

Enter the Chinese, who are Russia’s number one friend these days. They are set to conduct joint military exercises in the region in the near future. Guess who they will be simulating attacks against? Still think there is no threat? The threat is imminent and very, very real.

On to the U.S. side of military posturing… Ten B-52 bombers and as many as six B-2 strategic bombers will play at war in a game wittily entitled: “Global Lightning 14.” This will be played out from the 12th thru the 16th. Of course, we are trying to show we have a set as big as Putie Put’s. Which when I think of Obama vs. Putin, is laughable and depressing. Obama’s manhood is not exactly rocking the free world. I find the purpose statement curious as stated: to “demonstrate flexibility and responsiveness in training scenarios throughout the continental U.S.” So, fighting here as opposed to there? Defense, not offense? Ponder that for a while.

“Global Lightning 14” has been supposedly planned for more than a year. Actually, I believe that. They have known this was coming for a long time. But it is window dressing for the people, not serious battle planning against the enemy:

“This exercise provides unique training opportunities to incorporate the most current technology and techniques in support of our mission,” said Adm. Cecil Haney, Strategic Command commander. “Continued focus and investment in our strategic capabilities allow US Stratcom to deter, dissuade, and defeat current and future threats to the U.S. and our allies.”

Stratcom says this is ‘unrelated’ to events concerning Russia. Right. The head of our CIA and the Secretary of Defense won’t even label Russia an enemy. Well, to the elites, they aren’t. They are a means to an end. But, make no mistake… Russia and China are our enemies and are eventually coming after us.

No word on whether “Global Lightning 14” will include missile launches. It’s interesting we know more about the Russian’s military exercises than we do about our own. What does that tell you? Stratcom would not give further details. They gave a bland, non-committal, vague statement on the drill. What did you expect? However, there will be simulated cyber attacks. Wonder if those will come from the enemies within or without? Just sayin’.

As the U.S., Russia and China engage in another round of Nuclear RISK, they keep denying the obvious… that the world is in the opening salvo of WWIII.

3 thoughts on “Nuclear RISK And The Denial Of The Obvious”