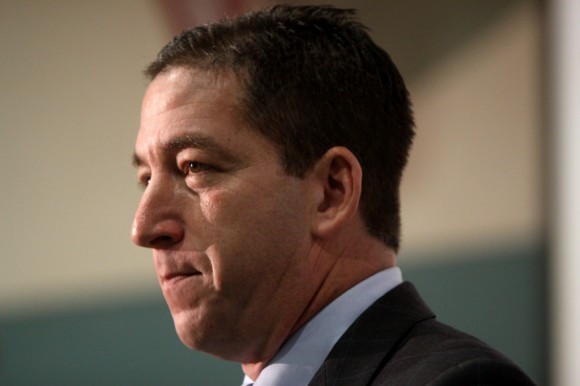 Glenn Greenwald is on a book tour capitalizing on and sensationalizing the NSA “revelations” given to him by traitor Edward Snowden, now under Vladimir Putin’s control in Moscow. But his most sensational claims about unwarranted NSA surveillance fall flat, such as in the cases of Dilma Rousseff of Brazil and Angela Merkel of Germany.

Greenwald reproduces in his book, No Place to Hide, a document showing U.S. interest in the “communication methods” of and “key advisers” to Rousseff, as if this is a hideous use of U.S. surveillance power.

Any serious journalist without an automatic anti-American bias would have to concede that there are legitimate national security grounds to monitor Rousseff and Merkel.

For Greenwald, however, it is “egregious” that Rousseff, a former communist terrorist, would be under surveillance. Rousseff, the daughter of a Bulgarian communist, was described in her police file as a terrorist and bank robber. She now runs Brazil with the support of the Brazilian Communist Party.

Another source, WikiLeaks, considered to be more friendly to Greenwald, notes a U.S. Embassy memo had described Rousseff as the “Joan of Arc of Subversion” when she became chief of staff to her predecessor, Luiz Inácio Lula de Silva of the Worker’s Party of Brazil.

WikiLeaks says the memo was “signed by U.S. ambassador John Danilovich,” and that it says this about Rousseff’s past: “Joining various underground groups, she organized three bank robberies and then co-founded the guerrilla group ‘Armed Revolutionary Vanguard of Palmares.’”

Not surprisingly, another WikiLeaks cable says Rousseff “quashed” anti-terrorism legislation, despite evidence of Islamists active in the country. Indeed, one cable refers to “the presence and activities of individuals with links to Terrorism—particularly several suspected Sunni extremists and some individuals linked to Hizballah—in Sao Paulo and other areas of southern Brazil.”

Is the NSA not supposed to be monitoring members of terrorist groups who take over huge countries in Latin America? Not in Greenwald’s world, where enemies of America and their priorities take precedence.

Yet, Rousseff’s speech to the United Nations in 2013 included the audacious claim, “We reject, fight and do not harbor terrorist groups.”

Seizing on Snowden’s leaks, Rousseff said, “Recent revelations concerning the activities of a global network of electronic espionage have caused indignation and repudiation in public opinion around the world.” She said, “Tampering in such a manner in the lives and affairs of other countries is a breach of International Law and, as such, it is an affront to the principles that should otherwise govern the relations among countries, especially among friendly nations.”

Brazil has since emerged as a member of the BRICS alliance of nations that includes Russia and China, and Rousseff has been photographed hand-in-hand with former KGB spy Putin.

An article about the BRICS—Brazil, Russia, India, China and South Africa—says they “are becoming less willing to accept US world supremacy.” Indeed, this is the name of the game. The objective of Greenwald, who lives in Brazil with his homosexual “husband,” is to undermine America’s influence and standing in the world.

Greenwald flaunts his anti-American bias. He will be appearing this Thursday night in Cambridge, Massachusetts, with one of his heroes, Noam Chomsky, a leading member of the Communist Party spin-off, the Committees of Correspondence for Democracy and Socialism.

As we previously noted, Chomsky is a major supporter of the Hezbollah terrorist group, and he opposed the killing of Osama bin Laden.

Greenwald also treats German chancellor Angela Merkel’s reported outrage over the NSA “eavesdropping on her personal cell phone” as an indictment of the NSA’s practices.

Merkel “angrily likened U.S. surveillance to the Stasi, the notorious security service of East Germany, where she grew up,” he says. Grew up? She spent 35 years of her life under the surveillance of the Stasi. What’s more, the sensational book, The First Life of Angela M, suggests Merkel concealed her work as an ideologue for the East German regime’s communist youth group. It would not be surprising if U.S. intelligence analysts suspected Merkel was a communist “mole” whose meteoric rise in the ranks of the German elite was something to be extremely concerned about.

Hasn’t her appeasement of Putin’s land grab in Ukraine confirmed these suspicions?

“Now for the first time,” his website proclaims, “Greenwald fits all the pieces together, recounting his high-intensity eleven-day trip to Hong Kong, examining the broader implications of the surveillance detailed in his reporting for The Guardian, and revealing fresh information on the NSA’s unprecedented abuse of power with never-before-seen documents entrusted to him by Snowden himself.”

A better attempt at putting the pieces together can be found in Edward Jay Epstein’s Wall Street Journal article, “Was Snowden’s Heist a Foreign Espionage Operation?” This is the “never-before-seen” aspect of the Snowden affair that most of the media shy away from. Putin’s fingerprints are all over Snowden.

Another good question is why Greenwald has not been arrested on charges of facilitating Snowden’s espionage operation. The hands-off Justice Department approach to this major Snowden accomplice suggests that the Obama administration wants to help Greenwald undermine the NSA.