Little Timmy Geithner — The Treasury Secretary who didn’t pay his taxes for a while after he was the chairman of the New York Federal Reserve Bank. He’s Yale or Harvard, one of the Ivy League schools, with all kinds of degrees in money things, and he claimed that he didn’t understand TurboTax. He wanted to pay his taxes, but for three years and it just… You know, it just didn’t happen. “Oh, it’s okay! He can still be secretary of the Treasury, ’cause he wanted to pay his taxes. He just made an honest mistake.” “And when they asked him to lie… he just went out there and lied.” …Rush Limbaugh 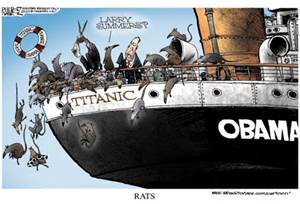 Little Timmy Geithner is just the latest in a long list of insider rats and whistleblowers who have deserted the Obamaland crony ‘first team’ ship that are now writing and talking about life inside that bubble. Just four months ago Defense Secretary Robert Gates’ memoir Duty landed an unexpected punch at the West Wing. Gates gave political advisers in the White House virtually no warning, and no advance copy, of his headline-generating memoir, which included sharp criticisms of Obama’s decision-making. Now Tim Geithner with newly released Stress Test: Reflections on Financial Crises and Hillary Clinton’s Hard Choices are the latest two high-profile authors to spill insider Obama administration details in their back-to-back memoirs… and they certainly won’t be the last.

Gates was sharply critical of Obama’s decision-making in his book “Duty: Memoirs of a Secretary at War.” He was also unsparing in his critique of Joe Biden, accusing the vice-president of having “been wrong on nearly every major foreign policy and national security issue over the past four decades.” Gates’ assessment sent the White House into damage control mode for several days, with officials issuing a statement from Obama defending Biden and staging a photo opportunity of the two men having lunch together… And then conveniently a Christie scandal appeared.

It is certainly not unusual for politicians and former high-level officials to write books or discuss their political lives. What is unusual is the rapid succession of their releases and them doing it while their former boss is still in office; especially someone like Tim Geithner who has long-term connections to the President and Valerie Jarrett. Perhaps it is why Geithner always looks so frightened?!? He knows their histories and the extent to which they will go.

Geithner writes in his memoir Stress Test, that the White House communications director asked him the Treasury Secretary to downplay… to lie on Sunday talk shows about the long term cost of Social Security spending to mollify the Democratic Party’s base.

‘I remember during one Roosevelt Room prep session before I appeared on the Sunday shows, I objected when Dan Pfeiffer wanted me to say Social Security didn’t contribute to the deficit. It wasn’t a main driver of our future deficits, but it did contribute,’ he says.

‘Pfeiffer said the line was a ‘dog whistle’ to the left, a phrase I had never heard before. He had to explain that the phrase was code to the Democratic base, signaling that we intended to protect Social Security.’ 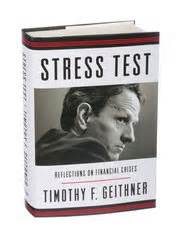 Geithner’s book was released amidst allegations that the White House changed the Sunday show talking points of U.S. ambassador to the U.N. Susan Rice’s after the September 11, 2012 attack in Benghazi, Libya for political reasons.

The White House has forcefully denied that it made anything other than minor changes to Rice’s talking points, but recently released e-mails between deputy National Security Adviser Ben Rhodes and White House communications staff calls the veracity of the Obama administration’s claims into question. The emails show that Rice was instructed to claim the attack was ‘spontaneously inspired ‘ and ‘to ​underscore that these protests were rooted in an Internet video, and were not a broader failure or policy.’

Geithner’s anecdote about White House communications staff trying pressure him into misleading Americans about the country’s ability to meet its future financial obligations once again casts a shadow on the Obama administration’s willingness to tell the truth when the truth is politically unappealing. And early reviews of Geithner’s book indicate that the former Treasury Secretary, who now works at a private equity firm, does not appear to have an axe to grind with Obama, which gives greater weight to his recollections.

In addition to the recent evidence of Susan Rice’s lies and the administration’s lies concerning their overall involvement in and handling of Benghazi, let us not forget the IRS’s Lois Lerner Bombshell involving the Treasury Department secretly having drafted ‘New Rules’ to restrict activity of Conservative Groups… Yet President Obama said there was no smidgen of corruption. There were also James Clapper who lied to Congress about the NSA, the unending string of DOJ Eric Holder’s lies and withholding of evidence and documents, as well as the President Obama-HHS Sec Sibelius lie of the decade… “If you like your healthcare… your doctor, your HC plan, you can keep it!” as well as additional lies coming out almost daily on ObamaCare as it is phased in.

And on the opposite end of the scale we now have people like General Michael Hayden Gleefully Admitting: “We Kill People Based On Metadata”

Clinton, Geithner and Gates occupied the three most powerful positions in Obama’s Cabinet through much of his first term, giving their accounts heightened importance in a literary landscape already littered with books about this White House and this administration.

Clinton’s book was certainly written to give Hillary a favorable glow for her expected 2016 presidential bid. So, don’t expect anything personally incriminating or a mea culpa on scandals like Benghazi involving both Hillary and Obama in that one!

I recently wrote a piece entitled Sunshine is the Greatest Disinfectant, and that sunshine is finally bringing the Benghazi scandal to the forefront in spite of the ongoing Democrat attempts to squelch an investigation by a Special Committee. And thanks to the political ambitions, courage, attempts to clear their own names before the axe falls or whatever their motivations, the books by these 3-high level Obama administration members, even if skewed, plus an increase in information from media; political, including Obama administration insiders, sources; and the military is increasing the intensity of that sunshine. Even Hollywood is beginning to see the reality of the bigger picture and speak-up now and then. Let us hope that the American people are paying attention and will get-involved and informed! Everyone involved in these scandals, cover-ups and lies needs to be held accountable and nobody should be rewarded with another shot at the public’s trust or election to public office ever again. Each of these scandals, cover-ups and lies are far too serious and have been far too damaging to America as a whole, and we don’t even know the full stories yet, to give any one of these people another chance!