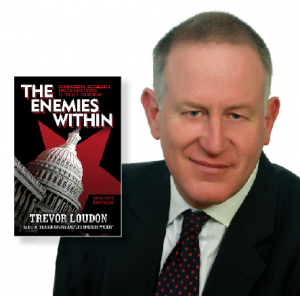 Hear Trevor Loudon expose “The Enemies Within: Communists, Socialists and Progressives in the U.S. Congress” with host, Belanne Pibel.

Like a modern-day Paul Revere, he is crossing the country to warn about “The Enemies Within…” and the continued threat to America’s liberties. Trevor is an internationally known blogger, writer and researcher, noted among other things for exposing the communist background of Obama’s “Green Jobs Czar” Van Jones, which led to his eventual resignation from his White House position. Loudon was also the first to publicize Barack Obama’s ties to Hawaiian Communist Party member Frank Marshall Davis.

Trevor Loudon’s research has been cited by Glenn Beck, Rush Limbaugh, countless articles, blog posts and in books by well known authors Paul Kengor, Aaron Klein and Jerome Corsi. He has addressed more than 200 audiences in more than 30 states in his four tours of the United States.

He is also the author of the 2011 book Barack Obama, and the Enemies Within.