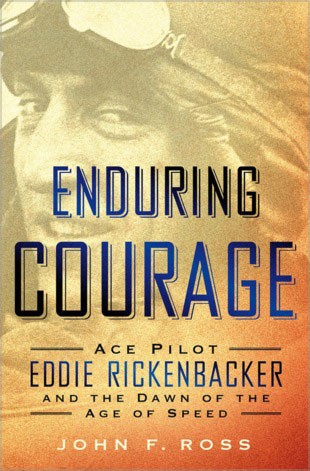 Upon arrival, Enduring Courage, by John F. Ross was summarily snatched off my desk by my husband and whisked off for reading. I was subject to exclamations of: “I’ve always wanted to read about World War I flying ace, Eddie Rickenbacker!” and “This is soooo cool!!” Needless to say, I had to wait my turn to read it. Husbands.

I can’t say as I blame him. It is an awesome book and a great read. Eddie Rickenbacker was a famous racing driver and the founder of Eastern Air Lines, which is no longer.

“I spent a lot of time reading about Eddie Rickenbacker, his buddies, the kids, the flyboys,” Ross said in a recent interview, “and the early American air service over northern France flying against the real pros, the Germans, the ‘Flying Circus.’ You read their journals and their letters home, they’re talking these life-and-death things.”

This is as American as it gets. The book lifts your spirits and takes you into the lives of courageous heroes. After reading the book, I felt renewed and ready to take up the fight again. Something that I needed a great deal and a sure prescription for the battle fatigue each and every American out there is feeling right about now as we fight for the Constitutional life and freedom of our country. This book is medicine for the soul.

Here’s the excerpt from Amazon.com, which gives a great summation of the book:

At the turn of the twentieth century two new technologies—the car and airplane—took the nation’s imagination by storm as they burst, like comets, into American life. The brave souls that leaped into these dangerous contraptions and pushed them to unexplored extremes became new American heroes: the race car driver and the flying ace.

No individual did more to create and intensify these raw new roles than the tall, gangly Eddie Rickenbacker, who defied death over and over with such courage and pluck that a generation of Americans came to know his face better than the president’s. The son of poor, German-speaking Swiss immigrants in Columbus, Ohio, Rickenbacker overcame the specter of his father’s violent death, a debilitating handicap, and, later, accusations of being a German spy, to become the American military ace of aces in World War I and a Medal of Honor recipient. He and his high-spirited, all-too-short-lived pilot comrades, created a new kind of aviation warfare, as they pushed their machines to the edge of destruction—and often over it—without parachutes, radios, or radar.

Enduring Courage is the electrifying story of the beginning of America’s love affair with speed—and how one man above all the rest showed a nation the way forward. No simple daredevil, he was an innovator on the racetrack, a skilled aerial dualist and squadron commander, and founder of Eastern Air Lines. Decades after his heroics against the Red Baron’s Flying Circus, he again showed a war-weary nation what it took to survive against nearly insurmountable odds when he and seven others endured a harrowing three-week ordeal adrift without food or water in the Pacific during World War II.

For the first time, Enduring Courage peels back the layers of hero to reveal the man himself. With impeccable research and a gripping narrative, John F. Ross tells the unforgettable story of a man who pushed the limits of speed, endurance and courage and emerged as an American legend.

This book is a clarion call to a new age of rising heroes that are just now spreading their wings. There are new limits to push, new barriers to break, new horizons to conquer and brave individuals are still with us and are yearning to move American into the future as a world leader once more. This book is a heroic thrill ride. For all who walk the edge and dare to take chances — this book is for you.

I would give this book to everyone I know. Instead of watching weanies in pajamas or hashtagging ourselves into oblivion, we should be emulating real heroes like Eddie Rickenbacker. John Ross has written a book that speaks to every adventurer’s and creator’s heart. Get the book and take a wild ride thru history that you will simply love. We all have fear, but those who use their fear to achieve are the great ones among us.

One thought on “Enduring Courage – A Book Review”