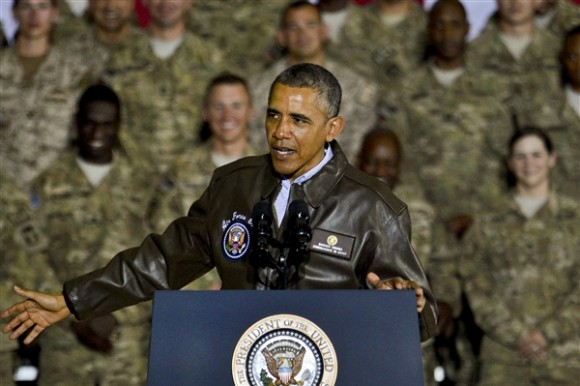 The Obama administration “mistakenly” revealed the identity of its CIA Chief of Station (COS) in Kabul, Afghanistan, over the Memorial Day weekend, by including his name on a list of senior U.S. officials who were taking part in President Obama’s unannounced visit there with American troops. The “pool report” listing the COS’ name was ultimately passed on by the White House to 6,000 people working for various news organizations. According to The Washington Post, the names on the list were “provided by U.S. military officials.”

The “pool report” had been filed by the Post’s Scott Wilson, who failed to notice this problem until after he sent the list back to the White House. “There were several misunderstanding and mistakes that happened, including my own failure to review the list before including it in my pool report and sending it back to White House press officials for distribution. I wish I had, and I regret not doing so,” wrote Wilson in an email.

It was not Wilson’s responsibility to protect the identity of America’s top intelligence officer in Afghanistan; it was the White House’s responsibility to protect the identities of its people in the clandestine services before sending information onto the press. But informing the press apparently took precedent that day over attention to detail and national security.

Citizens’ Commission on Benghazi (CCB) Member Clare Lopez, a former CIA officer herself, questioned whether an inappropriate mentality exists at the White House and whether this has trickled down to other offices. “Our national security leadership simply doesn’t view the enemy as the enemy….it’s all ‘potential partners,’” she said. “There is no understanding that there are implacable, remorseless enemies in this world who never rest, never sleep, and constantly plot ways to harm and destroy us.”

“Without that defensive mentality, even absent deliberate ill will, these kinds of things will happen over and over again,” continued Lopez.

In their coverage of this alleged “mistake,” both The Washington Post and the UK Telegraph, as well as other news organizations, pointed to the outing of Valerie Plame, blaming Bush officials. “In 2003, aides to George W. Bush leaked the identity of Valerie Plame, a CIA agent, in an attempt to tarnish the reputation of her husband, a former U.S. diplomat who criticized the Iraq war,” states the Telegraph. According to the Post, “The only other recent case came under significantly different circumstances, when former CIA operative Valerie Plame was exposed as officials of the George W. Bush administration sought to discredit her husband, a former ambassador and fierce critic of the decision to invade Iraq.”

Once again, the assertion is made that Plame was exposed by Bush officials who sought to discredit her husband, Joe Wilson. The Telegraph picked up that line almost verbatim. The truth, however, is that the person who leaked that information was Richard Armitage, of the State Department—someone who was opposed to going into Iraq. And in 2007, following the unjust prosecution of Scooter Libby, The Washington Post was the one discrediting Wilson, calling him a “blowhard,” and said that all of the major claims in his famous 2003 op-ed “were false.”

If the media would like to go after someone for leaking identities, they should look closer to home, at the Obama Administration itself. Have they forgotten how Defense Secretary Leon Panetta, then CIA Director, “recognized the unit that conducted the [bin Laden] raid and identified the ground commander by name…” at “a ceremony at CIA headquarters honoring personnel involved in the May 2011 bin Laden raid,” as recounted by the Project on Government Oversight? Panetta’s remarks contained Secret and Top Secret information, yet a Hollywood screenwriter for the movie “Zero Dark Thirty” was in attendance. As for Panetta, he claimed that his disclosure was inadvertent, just like the Obama administration’s recent disclosure of the Chief of Station’s identity has been excused as a “mistake.”

Perhaps this naiveté is just integral to the administration’s leadership. “A number of the new appointees, both senior and junior, seemed to lack an awareness of the world they had just entered,” former Secretary of Defense Bob Gates recounted about the fresh Obama team in his memoir Duty. “Symbolic of that, I noticed at our first meeting in the Situation Room that fully half the participants had their cell phones turned on during the meeting, potentially broadcasting everything that was said to foreign intelligence electronic eavesdroppers.”

“I mentioned it to Jim Jones, the new national security adviser, after the meeting, and the problem did not recur,” wrote Gates. How many other moments like this have the Obama team experienced?

Maybe there’s some sheer naiveté going on here, but the administration has had more than five years to improve on this situation since the day former Secretary Gates just described. For the sake of our nation, they need to learn a little faster.