The Middle East, with the singular exception of a stable, prosperous, democratic Israel, is in a state of turmoil and transition – with enormous violence and instability the norm. We are seeing Sunni-Shia tensions, increasing radicalism, and the break down of borders. And the situation is only growing more severe and more convoluted. One of the most serious aspects of the current scenario is that it is devoid of good guys. It’s simply a question of who is less problematic, less dangerous for Israeli and Western interests, and sometimes that’s a hard if not impossible call.

We’ve seen this in Syria for some time: Assad is a vile dictator, with no concern whatsoever for the lives of his own people and a solid alliance with Iran. While many of the rebels arrayed against him are jihadists who are seeking a cross-border caliphate that is a lethal proposition.

Today we see it as well in Iraq with the brutal onslaught of ISIS there. A ruthless Sunni, jihadist, al-Qaeda off-shoot (now a rival of al-Qaeda) that began in Iraq, ISIS established itself in Syria after the civil war began, becoming a significant rebel force there. Now it is moving against the regime of Iraqi Prime Minister Nouri al-Maliki’s Shia-dominated government – traveling across swaths of Iraq with lightening speed, taking territory and towns in the north and west of Iraq, and approaching ever closer to Baghdad.

Yesterday, the post of Turaibil, at the Iraqi border with Jordan was taken by ISIS, presenting a threat to the stability of Jordan.

ISIS is commonly referred to as an acronym meaning Islamic state in Syria and Iraq. But the Arabic – al-Sham – could just as well refer to “the Levant” (the eastern Mediterranean), which means that Lebanon and Israel are also in its sites, as is Jordan. Sometimes it is referred to as ISIL.

With all of this however, there is yet another a serious problem to be confronted: Iran, which is Shia, is attempting to influence events in Iraq to its benefit. Iranian President Hassan Rouhani promised Maliki Iran’s full support just days ago.

As well, Iran provides assistance to Shiite militia in Iraq. All of this strongly suggests the possibility of Iran achieving control in or undue influence over Iraq.

This rings loud bells in Jerusalem. One of the main reasons there has been Israeli opposition to Assad, in his struggle against jihadist rebels, is because he is an Iranian puppet. Were Iran to move into Iraq in a significant way, it would create an Iranian arc of influence that stretched from Iran itself through Iraq and through Syria to our border. And it would simplify the shipment of armaments from Iran to Hezbollah in Lebanon.

Thus it is greatly worrisome to the Israeli government that the US seems to be reaching out to Iran, to achieve some sort of joint understanding to limit ISIS. Not only would this give Iran undue influence in Iraq, it might cause the US to even further weaken its position in nuclear negotiations. That is, Iran’s price for controlling ISIS – which the US is very eager to see controlled – might be greater nuclear latitude. A real nightmare.

Prime Minister Netanyahu gave an interview on NBC’s Meet the Press yesterday advising the US that, “When your enemies are fighting one another, don’t strengthen either one of them.” Weaken them both, he said. He addressed his serious concerns about the possibility of allowing Iran nuclear weapons: “Iran could come out with nuclear weapons capability — it would make everything else pale in comparison.” (Emphasis added)

At our northern border with Syria (on the Syrian Golan) there is a considerable rebel presence. Yesterday, an anti-tank missile was shot from Syria into Israel, hitting a civilian vehicle. Two people were wounded and a teenage boy, Muhammad Karaka, an Israeli Druze from the village of Arrabe, was killed. His father, Fahmi is a contractor who works in the area for the Ministry of Defense. 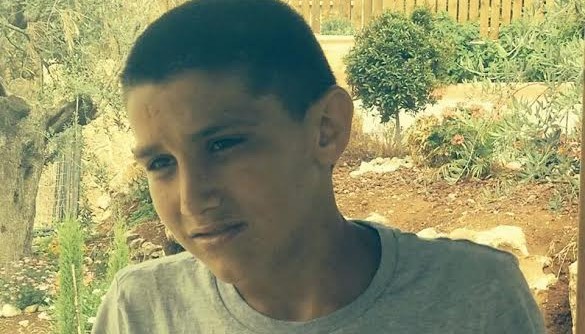 The missile seemed to have come from a rebel area, or an area that is contested militarily. But Israel has determined that the government of Assad is responsible, and late last night launched attacks on nine Syrian military sites, with at least 10 Syrian soldiers killed.

There is no substantial change in the search for the kidnapped boys. The operation continues apace.

One of the things I have found interesting about the intensive search being done for the boys in Judea and Samaria (largely in the Hevron area) is the uncovering and exploring of hidden places: caves, dried wells and cisterns, tunnels and other excavated places. The goal, of course, is to find the students, who may be hidden in such a place.

But the secondary result of this exploration is to locate hidden terrorist supplies and weapons laboratories, as well as to expose secret places where fugitive terrorists might hide (or, in some cases, were hiding). I heard a news report a few days ago about a hidden excavation under a house that was uncovered and turned out to be large enough (and was apparently sufficiently well stocked) to provide hiding for many weeks. There are tunnels dug under washing machines and stoves. The mind boggles a bit at the complex labyrinth of hidden places that has been set up and drawn upon as part of the terrorist infrastructure.

See: http://www.israelhayom.com/site/newsletter_article.php?id=18335 for descriptions and a video about two-thirds of the way down.

Then there are the “forked tongue” proceedings of Mahmoud Abbas. He’s playing both ends against the middle, as is his usual practice. He feels constrained by world opinion to condemn the kidnappings (all such condemnations clearly insincere). He must attend to this world opinion because funding for the PA is contingent upon positive attitudes towards the PA in the international community. But at the same time, he feels constrained by the Palestinian Arab street and his relationship with Hamas to condemn Israeli efforts to find the boys: we are causing unrest, provoking another intifada, doing collective punishment, etc. etc.

The recent statement by Amin Maqboul, member of the Fatah Revolutionary Council, reflects this situation. The Palestinian street, he says, “overwhelmingly” supports the kidnappings, if the goal is to secure the release of prisoners. While Abbas “sometimes makes statements that are unacceptable to our people. But the purpose [of these statements] is to spare the Palestinian people the dangers of Israeli aggression and reactions of the international community.”

Khaled Abu Toameh has written about unrest in the PA streets directed at Abbas and the PA:
“What happened in the center of Ramallah on the morning of June 22 could signal the beginning of an uprising, or intifada, against the Palestinian Authority [PA].

“The attackers were particularly furious with the Palestinian policemen who stayed inside their offices as Israel Defense Force soldiers entered Ramallah in the context of a manhunt to find three kidnapped Israeli youths.”

I note here that the resident of the White House has not deemed it necessary, to this day, to issue a clear and public condemnation of Hamas for the kidnapping. Situations such as the one we are currently facing serve the role of exposing duplicity and true intentions. What makes Obama’s silence all the more vile and reprehensible is that one of the boys – Naftali Frenkel – has US citizenship. The US government should be at the forefront of efforts to find him.

Mike Huckabee – former governor of Arkansas and talk show host – arrived in Israel yesterday. And he provided a sterling example of how to be a mensch – a person who stands up and does the right thing. For he immediately went to the Frenkel home to offer words of support and comfort.

“’Americans need to hear this story,’ he said. ‘This is an American citizen, this is one of us. And even if he wasn’t – this should not happen to any young man or to any parent…’

“When asked by Arutz Sheva about the United States’ call, last week, for ‘restraint on both sides,’ Huckabee said – ‘What’s to restrain? What are the Israelis supposed to do? This to me is nonsense. The only restraint at this point is the restraint by whoever has these boys to do nothing to hurt them. G-d help those people if they touch a hair on these boy’s heads… I think the Israelis have every right to say – and America should join this message – you touch that boy who’s an American citizen and you will have hell to pay for it. That should be the only message we are sending right now.’” (Emphasis added)

See a video of Huckabee saying this:

I close with this painful news, which has just been released, as a Shin Bet gag order has been lifted: In May, the Hamas terrorist Ziad Awad was arrested for the terrorist murder of Baruch Mizrachi on the eve of Pesach, outside of Hevron. What a horrible scene that was – Mizrachi, his wife and kids were on their way to a seder.

Ziad has been charged with the murder; his son, charged as an accessory, has also been arrested. It was the son who presented security personnel with the Kalashnikov rifle that was the murder weapon. Ziad had told his son that, “whoever kills a Jew goes to heaven.” (Emphasis added)

The most horrendous part of this is that Ziad Awad was one of the terrorists released in the trade for Gilad Shalit.

I have no words for this, my friends.