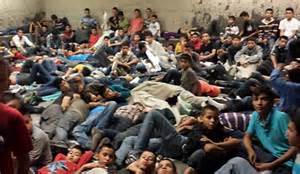 I never thought I’d see the day that there would be refugee camps in America, but they are here on our border with Mexico. And not just there, thanks to the flying and busing in of 10’s of thousands of illegal aliens, these camps are popping up in every state. And the Governors and Congressmen and women of those states were not notified they were even coming to their respective states. Now that they are here, they are not being allowed to see them either. In my own state of Oklahoma, case in point… Congressman Jim Bridenstine tried to see the refugees and just released this press release:

Congressman Bridenstine said, “There is no excuse for denying a Federal Representative from Oklahoma access to a federal facility in Oklahoma where unaccompanied children are being held. Any Member of Congress should have the legal authority to visit a federal youth detention facility without waiting three weeks.”

“After my visit today with the base commander, I approached the barracks where the children are housed. A new fence has been erected by HHS, completely surrounding the barracks and covered with material to totally obscure the view. Every gate is chained closed.

“I approached a security guard and asked to speak with the manager of the facility. The guard called his supervisor who said no visitors were allowed. I asked if they were aware that I am a Member of Congress. Eventually the manager came out and said that I would have to go through HHS legislative affairs and that the first chance to visit would be July 21st.

“What are they trying to hide? Do they not want the children to speak with Members of Congress? As a Navy pilot, I have been involved in operations countering illicit human trafficking. I would like to know to whom these children are being released.”

Ft. Sill is one of three facilities in the U.S. currently housing the unaccompanied alien children. The Administration policy is that after they are apprehended on the border by U.S. Customs and Border Protection, the children are transferred to U.S. Immigration and Customs Enforcement for transport, and then placed in the custody of the Department of Health and Human Services (HHS) until released to a so-called “sponsor” in the U.S.

It’s not just politicians being shut out either. Border Patrol agents have been told to shut up and not talk to the press or they would be fired and arrested. Now, medical staff have also been warned to keep mum under threat of arrest. Suddenly, it’s really, really beginning to feel a lot like Nazi Germany and for the first time, I truly feel a shudder of fear crawling up my spine. Obama and his cohorts are not even being subtle any more. These are children, for God’s sake! Children who are being warehoused in FEMA-type refugee camps with no rights, no visitors and absolutely no transparency. Forget about compassion and humanity – they serve the collective.

Obama proclaimed to America that the children had to go home to their individual countries. But his actions belie his true intent. These children were provided bus tickets in many instances. They were actively recruited to come here. Now they live in deplorable conditions… filth and stench beyond American comprehension and a plethora of disease is spreading. This, my friends, is manufactured chaos. A chaos that Obama could use to put UN troops on our borders.

Why do you think medical staff are being threatened and bullied? Because the conditions are so outrageous that Americans would be horrified if they truly knew how bad it was, that’s why. The threats are coming from a government contracted security agency who actually refer to themselves as “Brown Shirts.” I kid you not. “It was a very submissive atmosphere,” the counselor said. “Once you stepped onto the grounds, you abided by their laws – the Brown Shirt laws.” This is part of Obama’s private mercenary army. Several personnel have broken their confidentiality agreements to come forward anyway. Good on em.

“There were several of us who wanted to talk about the camps, but the agents made it clear we would be arrested,” a psychiatric counselor told Starnes. “We were under orders not to say anything.” Starnes reports that the sources said workers were guarded by a security force from the Baptist Family & Children’s Services, which the Department of Health and Human Services hired to run the Lackland Camp.

At the immigrant camp, Starnes say “workers were stripped of their cellphones and other communication devices. Anyone caught with a phone was immediately fired. “Everyone was paranoid,” a worker said. “The children had more rights than the workers.” She said children in the camp had measles, scabies, chicken pox and strep throat as well as mental and emotional issues. “It was not a good atmosphere in terms of health,” she said. “I would be talking to children and lice would just be climbing down their hair. You could see the bugs crawling through their hair,” she said. “After we would rinse out their hair, the sink would be loaded with black bugs.”

Starnes says, “a former nurse at the camp addressed how she was horrified by what she saw. “We have so many kids coming in that there was no way to control all of the sickness – all this stuff coming into the country,” she said. “We were very concerned at one point about strep going around the base.” Both the counselor and the nurse said their superiors tried to cover up the extent of the illnesses. “When they found out the kids had scabies, the charge nurse was adamant – ‘Don’t mention that. Don’t say scabies,’” the nurse recounted. “But everybody knew they had scabies. Some of the workers were very concerned about touching things and picking things up. They asked if they should be concerned, but they were told don’t worry about it.”

So now, telling the truth can get you imprisoned – in the United States. This is no longer a free country and we are letting Progressive thugs and monsters run things. This must stop. Todd Starnes of Fox News who did the expose on this, says his sources say that Americans should be very concerned about the secrecy of the government camps. People called those who feared FEMA camps crazy. Oh? Crazy? Evidently not so much, just in a way we did not foresee. But I’m sure it will morph into our previous nightmare given time. In the meantime, Obama is spreading a form of biowarfare throughout America along with an invasion force (age is irrelevant as families follow the children).

Obama is flaunting this in our faces. Why do you think these jackbooted thugs proudly call themselves “Brown Shirts?” They want the shock, awe and fear of it to reverberate among Americans — that’s right — domestic shock and awe. They want submission. This is the mentality and actions of a dictator beginning to spread his poison throughout what was once the land of the free and the home of the brave. Enforcing the secrecy of Obama’s refugee camps is only the beginning of the end of America. The Constitution be damned.

Obama’s Brownshirts: “It’s not fascism when we do it!”

17 thoughts on “Enforcing the Secrecy of Obama’s Refugee Camps”